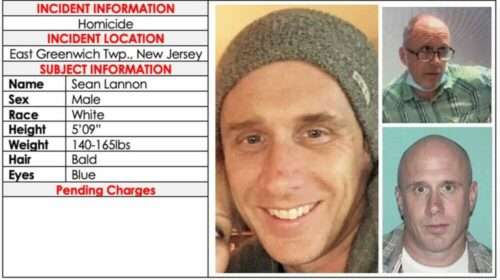 Sean Lannon who was wanted for his alleged involvement in five murders has been arrested in St. Louis Missouri. According to police in Missouri he was arrested without incident. Reports have indicated that Sean Lannon is wanted for questioning for a murder in New Jersey and for four more in New Mexico. The murder victim in New Jersey was described as a long term acquaintance of Lannon. The four murders in New Mexico consisted of Sean Lannon ex wife along with three others. According to officials in New Mexico the bodies of Jennifer Lannon, 39, Matthew Miller, 21, Jesten Mata, 40, and Randal Apostalon, 60 were found in the parking lot at an airport in Albuquerque. Police have said some of the bodies had been dismembered. Sean Lannon was also wanted for forcing his way into a home in New Mexico and attempting to force his way into another. Sean Lannon and his ex wife Jennifer divorced in 2019

Authorities are asking for the public’s help in locating a suspect in a New Jersey killing who is also a person of interest in a quadruple homicide in New Mexico.

Sean Lannon, 47, of Grants, New Mexico, is considered armed and dangerous and is wanted for questioning in a killing in East Greenwich Township on Monday, the Gloucester County Prosecutor’s Office announced.

Lannon is originally from the East Greenwich area and knew the victim in Monday’s killing, according to prosecutor’s office Chief of Detectives Tom Gilbert. Gilbert described the victim as an adult male, but declined to release additional details Tuesday.

He was possibly last seen on Monday at around 3 p.m. near the Walter Rand Transportation Center in Camden. The U.S. Marshal’s Service also announced a $5,000.00 reward for information leading to Lannon’s arrest.

Information about the New Mexico killings was not included in the prosecutor’s announcement, but law enforcement officials there have released some information.

A foul odor led police to four bodies found in a parked vehicle at an airport in Albuquerque, New Mexico, on Friday, according to news reports. Police identified the victims as Jennifer Lannon, 39, Matthew Miller, 21, Jesten Mata, 40, and Randal Apostalon, 60.

In a statement Tuesday, the Albuquerque Police Department confirmed Sean Lannon is “a person of interest” in the Friday slayings.

“APD is currently working with multiple agencies on this investigation. Lannon is also currently wanted out of New Jersey for questioning in another investigation,” the department said.

Three of the victims were reported missing in January from Grants, New Mexico, a small town about 78 miles west of Albuquerque.

Lemos was described as armed and dangerous.

A man sought in connection with a homicide in New Jersey and the deaths of his ex-wife and three other people in New Mexico has been apprehended in Missouri, authorities said.

Lannon is the suspect in a Monday killing in East Greenwich Township in South Jersey that claimed the life of a man whose identity has not been released by investigators.

When he was apprehended Wednesday by the U.S. Marshals’ St. Louis Metro Fugitive Task Force, Lannon was driving a blue Honda CR-V reported stolen in connection with the East Greenwich killing, officials said.

Lannon was also labeled a person of interest after four bodies were found Friday in a vehicle left at an airport parking garage in Albuquerque, New Mexico, which is about 80 miles west of Grants. Three of those victims — Jennifer Lannon, 39, Matthew Miller, 21, and Jesten Mata, 40 — were previously reported missing.

Jennifer and Sean Lannon, who are originally from South Jersey, divorced in 2019, according to New Mexico court records, with a judge ruling in favor of Sean Lannon. The filing sought custody of the couple’s children

Authorities confirmed that the children are safe.

Sean Lannon is from the East Greenwich area, according to investigators. Jennifer Lannon previously lived in Clayton, West Deptford and Blackwood, according to public records searches.

In addition to the homicide case in New Jersey, prosecutors announced Tuesday evening that Lannon was charged with burglary and possession of a weapon after allegedly forcing his way into a home in Monroeville, Elk Township, while armed with a knife on Monday.

Albuquerque police are working with Grants authorities on the investigation of the three missing-person deaths, while Albuquerque detectives are investigating the death of the fourth victim found in the vehicle, 60-year-old Randal Apostalon.

Lemos was described at the time as armed and dangerous.

An aunt of Miller told TV station KOB4 in New Mexico that Lemos and Miller are related and that her nephew was “simply at the wrong place at the wrong time and simply giving somebody a ride.”

Authorities in New Mexico described the investigation as ongoing and have not disclosed how Sean Lannon may be connected to Lemos and how the victims there died.

On Tuesday, Gloucester County authorities announced that Lannon was a suspect in the New Jersey and New Mexico cases and cautioned he was considered armed and dangerous. The U.S. Marshal’s Service announced a $5,000 reward for information leading to his arrest.

Charges against Lannon in the East Greenwich homicide will be filed soon, Acting Gloucester County Prosecutor Christine Hoffman noted in announcing the arrest.

“The rapid and successful apprehension of Lannon is the direct result of excellent collaboration between a wide array of local, county, state and federal partners,” Hoffman said in a statement. “We are particularly grateful to the U.S. Marshal’s New York/New Jersey Regional Fugitive Task Force/Camden Division as well as their parallel jurisdictions between New Jersey and Missouri for deploying their resources to rapidly apprehend Lannon, who was clearly a direct threat to the public.”