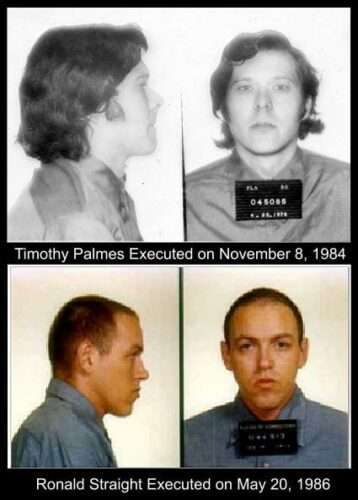 Timothy Charles Palmes went calmly to his death today in Florida’s electric chair for the torture killing of a furniture store owner whose body was stuffed in a homemade box and dumped into a river.

Asked if he had any last words, Palmes gave a slight grin and said, ‘My family’s love has been my strength. That’s all. Goodbye.’

Then he shut his eyes tightly as guards put a gag over his mouth and a black flap over his face.

Palmes’ fists clinched as the hooded executioner turned on the electricity at 10:03 a.m. His chest heaved upward and the muscles in his arm and neck bulged. Light smoke came from an electrode on his lower right leg and his skin turned an ashen color.

Prison Superintendent Richard Dugger then got on an open telephone line to Gov. Bob Graham and told him the execution had been carried out.

About 35 demonstrators — carrying signs, singing and praying – protested the execution in a pasture across from the prison, singing ‘We Shall Overcome’ as it was carried out. Ten others carried signs in favor of capital punishment and clapped when word was received that Palmes was dead

Timothy Palmes already was on probation for manslaughter when he and two accomplices joined in the 1976 robbery-murder of James Stone, 41, of Jacksonville. Stone’s body was found by divers on the bottom of the St. John’s River.

Palmes initially confessed but later pleaded innocent. He was convicted, however, on the testimony of a female accomplice who was granted immunity.

The execution was the 10th in Florida and the 30th in the nation since the Supreme Court lifted the ban on capital punishment in 1976.

Palmes lost his last appeal Wednesday when the Supreme Court refused by a 7-2 vote to intervene. Justices William Brennan and Thurgood Marshall dissented, as they do in all death penalty cases.

‘He has a very realistic attitude,’ said Bradford. ‘I think he thinks the time is here.’

The 11th U.S. Circuit Court of Appeals gave Palmes a one-day reprieve Tuesday to allow him to appeal to the high court. That stay expired at 10 a.m. today and prison officials proceeded with the execution. His death warrant was to expire at noon

The condemned killer spent Wednesday in a holding cell about 30 feet from the death chamber, watching television and chatting with prison guards. He declined to hold a final news conference.

Palmes and Chester Levon Maxwell, 29, were both scheduled to die Wednesday in the nation’s first double execution in 19 years.

But Florida’s Supreme Court issued an indefinite stay Tuesday to Maxwell so it can rule on the merits of an appeal claiming he had organic brain damage that was not fully considered by his trial judge.

Palmes’ attorneys maintained he and co-defendant Ronald Straight, who remains on death row, were unfairly sentenced while accomplice Jane Albert, who testified for the prosecution, was granted immunity.

According to testimony, Albert, an employee at Stone’s furniture store, lured Stone to her apartment with the promise of meeting a woman.

When he arrived, Palmes and Straight jumped Stone, bound his hands and feet with wire, put a garbage bag over his head, beat him with a hammer and stabbed him 18 times.

The trio then stole $3,100 from Stone, stuffed his body in the weighted box, dumped it in the river and fled the state in Stone’s car. They were captured a week later in California.

Palmes had been scheduled to be executed in 1980, but a federal judge intervened.

Palmes spent his last few hours with an official observer who was hired by the Corrections Department to make sure he was not mistreated. His family visited until 1 a.m. and he did not ask that a minister be present.