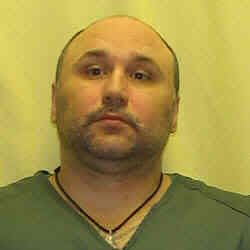 During a riot at the Southern Ohio Correctional Facility (“Lucasville”),
Robb murdered 40-year-old prison guard Robert Vallandingham, and prison
inmate, 31-year-old David Sommers. Robb was the leader of the prison’s
Aryan Brotherhood, who along with other prison inmates, held prison
guards and inmates hostage. On April 15, 1993, Robb, Carlos Sanders, who
was the leader of the prison’s Muslim group, and James Were, another
inmate, ordered inmates to strangle Mr. Vallandingham to death with a
cord and baseball bat. On April 21, 1993, Robb arranged for inmates to
stab, choke and beat Mr. Sommers to death with baseball bats. At the
time, Robb was serving a sentence for voluntary manslaughter. Sanders
and Were also received a death sentence for the aggravated murder of Mr.
Vallandingham.