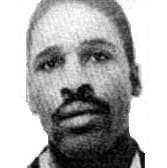 Van Roosevelt Solomon, a former minister who was once a robbery-shooting victim himself, was executed in Georgia’s electric chair early Wednesday for the 1979 torture-murder of a convenience store manager.

Solomon went to the execution chamber after a final meal of fruit and chocolate ice cream and was put to death with a single, two-minute surge of 2,080 volts of electricity.

The 41-yearold former Oklahoma Baptist minister was pronounced dead at 12:27 a.m. EST. Prison officials said his body was turned over to his family for cremation.

‘I would like to say I would like to give my blessing to all the people who tried to save my life,’ Solomon said after being strapped into the electric chair.

Among those who joined the fight to save Solomon was was the widow of slain civil rights leader Martin Luther King Jr., who said his execution would be ‘a travesty.’

Solomon walked into the execution chamber calmly and spoke quietly to prison guards who strapped his arms, legs and chest into the wooden chair. After making his final statement, Solomon prayed briefly with the prison chaplain, then stared intently while warden Ralph Kemp read his death sentence

When the electricity surged through Solomon, he bolted upright with clenched fists. Afterwards, his torso relaxed and slumped forward and moments later he was prounounced dead by two prison physicians.

Defense attorney George Kendall, who witnessed the execution, sighed deeply, closed his eyes, lowered his head briefly, then stared intently at his dead client before leaving the execution chamber.

About 50 demonstrators stood in a light rain outside the Georgia Diagnostic and Classification Center. Death penalty protesters decried executions as ‘modern day crucifixions’ while capital punishment advocates called it ‘a permanent attitude adjustment.’

Hours before Solomon was put to death, the Supreme Court and Georgia Board of Pardons and Paroles refused his pleas for a stay and clemency.

He became the 38th convict executed in the nation and the fifth put to death in Georgia’s electric chair since the Supreme Court reinstated capital punishment in 1976.

Solomon was sentenced to death for killing Roger Dennis Tackett, the manager of a convenience store in Smyrna. Five years earlier, Solomon almost died when he was shot in the stomach during a holdup of a downtown Atlanta grocery store he managed.

Prosecutor Tom Charron disagreed. He said there were two pistols and both men had gunpowder residue on their hands.

‘They shot his thumb off as he was dying because they wanted to know where the money was,’ said Charron, who called the slaying ‘particularly horrible.’

The victim’s father, Norman Tackett, 72, said the execution would ease his pain ‘to some extent.’

‘They have all the evidence that proves they’re guilty and they should have to suffer too,’ he said.

Solomon, the son of an alcoholic father and pious mother, served 3 years in Oklahoma prisons for assault and armed robbery before becoming an assistant pastor of a Baptist church in Lawton, Okla.

Friends in Lawton and Atlanta, where Solomon moved in 1973, say he took in numerous homeless and needy people and the pastor of his Lawton church called him ‘a caring and deeply Christian man.’

Defense attorneys say the jury that sentenced Solomon to death was never told about his past good deeds.

Coretta Scott King wrote the pardons board that Solomon’s execution ‘would be a travesty of justice.’