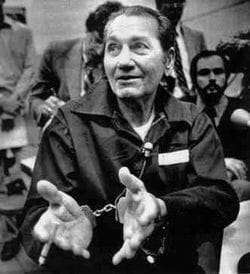 U.S. District Judge George Carr rejected a stay of execution in Tampa earlier Monday, and Antone’s attorneys immediately took their case to the 11th U.S. Court of Appeals in Atlanta, which still had not ruled late Monday night

The execution was expected to take place at 7 a.m. EST Tuesday unless a stay was issued by the Atlanta court or by the Supreme Court, at which the attorneys readied a plea. There was no indication when the two courts would rule.

Antone, 66, was convicted of being the go-between in the hired murder of former Tampa vice squad Sgt. Richard Cloud in 1975.

If executed, he would be the 12th man put to death since the Supreme Court lifted its ban on capital punishment in 1976, and the third in Florida. The last man to die in Florida’s electric chair was Robert Sullivan, executed Nov. 30, 1983.

Antone was scheduled to die in the electric chair Feb. 2 1982, but was granted a stay by the 11th Circuit Court of Appeal in Atlanta the day before.

Carr had ruled three days earlier he found no merit to Antone’s appeal, but then granted a temporary stay as a precautionary measure.

Carr ruled Monday the four points cited by defense attorney Tom McCoun were invalid because McCoun had raised the same arguments two years before, and Carr had rejected them.

Antone said at at jailhouse news conference Monday he was prepared to die.

‘I don’t fear death. As far as I’m concerned, death is merely discarding the vehicle and life goes on,’ Antone told reporters at Florida State Prison.

Wearing a blue prison uniforms and faded yellow T-shirt, the self-proclaimed metaphysicist also insisted he was innocentof the gangland-style slaying.

‘I didn’t kill anyone. Everyone knows that. There are people here who raped and killed and the government saw fit to give them life (terms),’ he said. ‘They know who (the real killer) is — law enforcement and the prosecutor — They know who it is but I don’t want to say.’

‘Being a Sicilian, They put a stigma on me of being associated with the Mafia. I have nothing to do with the Mafia,’ he said. ‘I was just a guy knocking a living, working with air conditioners.’

Antone was convicted of being the middle man between mobster Victor Acosta, hit-man Benjamin Gilford and getaway car driver Ellis Haskew. Gilford admitted shooting Cloud and committed suicide in jail the day before he was to be sentenced.

Acosta committed suicide in jail before he could be brought to trial. Haskew negotiated a plea agreement in which he testified against Gilford and Antone in return for a 35-year prison sentence.

Asked how he wanted to be remembered, Antone said, ‘My relatives will know how to remember me — as a loving person. I never hurt anybody. I’ll sleep fine tonight. I feel good about my life.’

Antone has spent his time on death row reading books on metaphysics and the occult, and said ‘I have no fear of death. I want to get it over with and go on to the next’ life.

But he said he was concerned the 2,300-volt jolt from the electric chair will expel his ‘astral counterpart’ abruptly from his body, rather than gradually as he believes necessary.

At the Tampa hearing, McCoun contended he had additional new evidence which would warrant an evidentiary hearing and said he had been ineffective in his legal assistance when he took over the appeal of Antone’s conviction

‘I was a volunteer counsel and I didn’t have sufficient time to go out an find witnesses who might come in and testify,’ McCoun said of the sentencing phase do the trial.

‘I had never had any contact with Mr. Antone until I went into that hearing. I was ineffective in a legal sense because of the inablility to find witnesses. I failed Mr. Antone