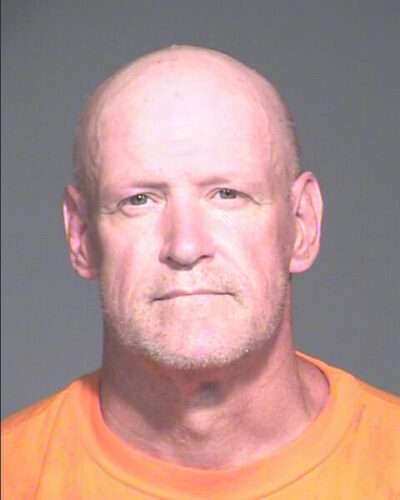 On July 13, 2002, Leroy Dean McGill walked into an apartment in north Phoenix carrying a cup full of gasoline. McGill doused Charles Perez and Nova Banta with the gasoline and lit them on fire. Perez subsequently died from his burns. Banta was so severely burned that treating physicians had to put her in a medically-induced coma in order to save her life. McGill, a twice convicted felon (armed robberies), committed these crimes because the victims had accused him of stealing a shotgun. McGill had been staying with the owner of the gun. As a result of the accusation, the gun owner threw McGill out of his home, causing McGill to become homeless. After starting the fire, McGill asked an acquaintance if he could smell burning flesh. He also bragged that he had mixed the gasoline with Styrofoam to form a gel so that it would stick to the victims and burn hotter.

In July 2002, thirty-nine-year-old Leroy McGill was living in Sophia Barnhart’s house.   His girlfriend, Jonna “Angel” Hardesty, also lived there, as did Justin Johnson and Barnhart’s oldest son, Dean. Jack Yates had a small one-bedroom apartment in a duplex within walking distance of Barnhart’s home.   Hardesty’s brother, Jeff Uhl, sometimes stayed in Yates’ apartment.   Eddie and Kim Keith, along with their two daughters, also stayed with Yates, as did Charles Perez and his girlfriend, Nova Banta.   Yates had his own bedroom, and the others slept in a common room that also served as kitchen and living room.

¶ 3 Perez and Banta had recently accused McGill and Hardesty of stealing a shotgun from the Yates apartment.   This accusation exacerbated an already contentious relationship between Banta and Hardesty.

¶ 4 On July 12, 2002, McGill, Hardesty, Barnhart, and Johnson spent the evening at Barnhart’s house smoking marijuana purchased from Perez.   At approximately 3:30 a.m. on July 13, McGill went to Yates’ apartment.   Uhl and Eddie Keith came out of the apartment to talk with McGill.   McGill told Keith to get his wife and children out of the apartment because he “was going to teach [Perez] and [Yates] a lesson, that nobody gets away with talking about [McGill and Hardesty].”   In response to Keith’s pleading, McGill agreed to spare Yates, but said it was too late for Perez.   McGill also told Keith that he “was the only one who knew about it and that if anybody said anything about it, that [McGill] would know who said it,” then remarked that Keith “had pretty little girls.”   Keith and his family fled the apartment.

¶ 5 Uhl admitted McGill into the apartment shortly thereafter.   Perez and Banta were sitting next to each other on a couch that was next to the front door.   Yates was also inside and either lying down on another couch or in his bedroom.   Banta testified that McGill “turned around and looked at me and [Perez] and said [Perez] shouldn’t talk behind other people’s backs, and he poured the gasoline on us and quickly lit a match and threw it at us.”   McGill had added pieces of a styrofoam cup to the gasoline to create a napalm-like substance that would stick to his victims and cause them more pain.   Perez and Banta, both engulfed in flames, ran out of the apartment.

¶ 7 At the hospital, Perez, screaming in pain, pleaded, “Help me, help me.   Get the pain away.”   Burns covered eighty percent of Perez’s body and caused his death on July 14, 2002.   Banta was also conscious and in extreme pain;  third degree burns covered approximately three-quarters of her body.   At the hospital, Banta identified McGill as the person who set her on fire.

¶ 8 Meanwhile, at Barnhart’s house, Hardesty told Johnson that McGill had just called and asked “if it smelled like burning flesh.”   Referring to Johnson, McGill asked Hardesty or Barnhart, “Is he going to talk?”   Johnson testified that someone, either McGill, Hardesty, or Barnhart, threatened him with harm if he reported anything about the murder.