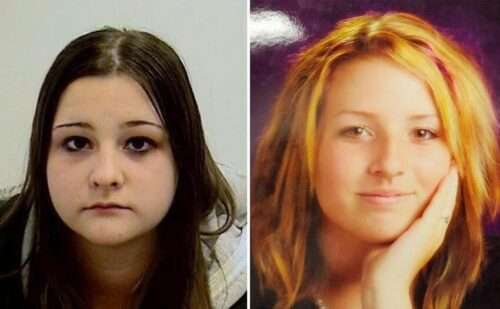 Melissa Todorovic was fifteen years old when she manipulated her boyfriend to murder a perceived romantic rival. According to court documents Melissa Todorovic would withhold sex from her boyfriend until he murdered his ex girlfriend Stefanie Rengal. The boyfriend, David Bragshaw would wait for Rengal to leave her home then fatally stabbed the teenager to death.

This teen killer would receive a youth life sentence meaning she would serve no more than seven years.

The puppet master has finally met her match.

And so killer Melissa Todorovic has had her day parole revoked and she’ll remain behind bars for orchestrating the senseless murder of 14-year-old Stefanie Rengel.

Melissa Todorovic, 27, had tried to convince the Parole Board of Canada that she had learned her lesson, that she now realizes she should have abided by her day parole conditions and disclosed that she was in the midst of an “unhealthy” love triangle with two ex-cons.

But Melissa Todorovic kept it a secret, starting a dalliance with a high-risk offender named “Kirk” who she’d met at a group for reintegrating former inmates, signing herself out of her Brampton halfway house and lying about where she was going.

And then, unsatisfied with the sexual prowess of her first paramour, she set her sights on his best friend “Dennis” and started an affair with him, as well.

All the while, playing them against each other as only a cunning puppet master can do.

We’ve all heard this story before, of course. The jealous Melissa Todorovic was 15 when she blackmailed her boyfriend David Bagshaw into killing Rengel — whose parents were both Toronto cops at the time but her mom is now a grief counsellor.

Melissa Todorovic became strangely obsessed with Rengel, who had briefly — and platonically — dated Bagshaw, two years before. After her unrelenting eight-month campaign of phone calls, 50,000 MSN messages and thousands of texts rife with sexual blackmail — “Ur getting blocked until u kill her” — her lovesick boyfriend finally agreed to carry out the plan.

On New Year’s Day, 2008, just days shy of his 18th birthday, Bagshaw lured Stefanie from her East York home and stabbed her six times in the abdomen, ripping through the black sweater her mother had given her for Christmas just days earlier.

He then left her to bleed to death in a snowbank.

All this time later, released after serving only about 11 years of her life sentence for first degree murder, Melissa Todorovic is falling back into her old pattern: Playing with people’s lives.

Parole board hearing officer Shannon Stewart wasn’t falling for any of it: not her mea culpa or Melissa Todorovic’s insistence that she should be given another chance, this time at a halfway house in Kingston.

Rengel’s mother, Patricia Hung, said she was relieved by the revocation of Melissa Todorovic’s day parole.

“Getting the news that Melissa Todorovic reoffended badly enough to be taken into custody was shocking,” she said in her victim impact statement. “The fact that Melissa, in just a few short months, was unable to abide by her very limited conditions, raises red flags that are, frankly, terrifying.”

Melissa Todorovic was awarded day parole last November under pretty lenient conditions: All she had to do was continue counselling and report any relationships to her parole officer.

Yet almost immediately, she was secretly looking for love in all the wrong places. “I knew it was wrong,” Melissa Todorovic admitted. “I didn’t have people to talk to. I liked people complimenting me and giving me attention and didn’t want that to end.”

She even tried to deflect the blame. “Nobody asked me if I was in a relationship,” she said.

That didn’t fly with the hearing officer, who accused her of downplaying her web of lies to everyone from her family to her team of support workers.

“You chose to deceive,” Stewart said.

It was only by happenstance that her clandestine hook-ups were uncovered. Her community parole officer Angela Law told the hearing she was informed by Kirk’s probation officer, who had recognized Melissa Todorovic from past media coverage of the gruesome killing.

A search of her room found a Valentine’s Day card from Kirk in which he apologized for not satisfying her and for not treating her well.

Melissa Todorovic’s bail was suspended in March and she was returned to the Grand Valley Institution for Women for violating her conditions. Friday’s hearing was to determine whether her day parole should be permanently revoked — she can reapply in a year — or reinstated under new conditions.

Her parole officer recommended she remain in prison because her failure to disclose that she was involved in not one, but two, relationships and her “manipulating them against one another” show she still presents an undue risk to the public.

The hearing officer agreed — and so in prison she’ll remain.

Melissa Todorovic who has gained weight and cut her hair since her 2009 trial, wiped away tears throughout the hearing but simply stared coldly at Stewart when told she’d be losing her freedom.

Somebody had finally cut her strings.

A woman who pressured her boyfriend into murdering his teenage ex more than a decade ago has lost her bid to overt urn the revocation of her parole.

In a decision released Friday, the appeal division of the Parole Board of Canada rejected Melissa Todorovic‘s argument that the board was unreasonable and overly strict in cancelling her day parole last year.

The parole board moved to send Todorovic back to prison after finding she had become entangled in a secret love triangle, contravening a condition of her release that required she disclose any new relationships.

The one-person panel found at the time that Todorovic’s “purposeful and calculated” deception meant she posed an undue risk to the public.

She had been granted six months of day parole in a halfway house in late 2018, after the board found she had improved in understanding what led her to orchestrate the 2008 killing of 14-year-old Stefanie Rengel.

But the board required that she report any new romantic or platonic relationships because of the role unhealthy romance played in her crime.

The love triangle was discovered in March of last year, causing the board to suspend Todorovic’s parole, and a hearing was held in August to decide whether to uphold the suspension.

At that hearing, Todorovic’s parole officer said the woman had become romantically involved with two men on probation who were friends, and appeared to be turning them against each other.

Todorovic, meanwhile, said she knew it was wrong to hide the relationships, but insisted there was no manipulation.

In challenging the revocation, Todorovic argued the board should have been more lenient in assessing whether she posed a risk to the community, given she has spent the last 12 years in prison without the opportunity to understand how to function in the community.

The appeal division rejected that argument, saying Todorovic had participated in numerous programs and been granted temporary absences and work releases to prepare her to reintegrate into society.

The reality is that you have been given every opportunity to improve your understanding of your risk and needs, to develop effective and meaningful strategies to recognize and manage your risks, and to prepare yourself for a graduated return to society,” the decision read.

“Your own choices resulted in your suspension of day parole; your own decisions to be evasive and manipulative precipitated the revocation of your parole,” it said.

“The board was not unreasonable in determining that, by engaging in romantic relationship with two friends, by psychologically manipulating one against the other, and by consciously choosing to not report these relationships to your (parole officer), you had become re-engaged in your offence cycle.”

The appeal ruling also dismissed her arguments that a victim impact statement read at the hearing went beyond what is permitted, and that there was a reasonable apprehension of bias because the panel member who heard her case had previously interacted with her in a professional capacity.

“The board member conducted a thorough hearing, was respectful and collegial with you and did not act in a manner that would suggest bias; nor did the decision appear to suggest that the board member relied upon her past knowledge of you to influence the decision,” the document said.

Todorovic was convicted of first-degree murder in 2009 for ordering her then-boyfriend, David Bagshaw, to kill Rengel. Both were sentenced to life in prison, with Todorovic eligible for parole after seven years.

The plot was fuelled by Todorovic’s jealous obsession with Rengel, a girl she had never met but who Bagshaw had briefly dated years earlier. Todorovic, who was 15 at the time, continuously threatened to break up with Bagshaw or withhold sex unless he killed Rengel.

He eventually lured Rengel out of her family’s Toronto home and stabbed her to death on New Year’s Day 2008.