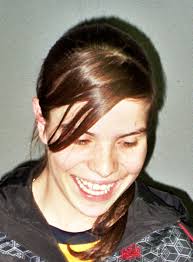 Lorraine Thorpe was just fifteen years old when she murdered her father and another woman. The would be serial killer was finally arrested and shocked England. According to court documents the deranged couple would then abduct a woman and would torture her for two days before actually killing her. When Lorraine caregiver made a threat that he was going to call the police the pair attacked him beating the man to death.

At first police did not think that Thorpe could be responsible due to the level of violence in the two murders however Lorraine would make a full confession detailing the two barbaric attacks. This teen killer would be sentenced to a minimum of fourteen years in prison meaning she could be released before she turns thirty.

Britain’s youngest female double killer boasted to the police about her brutal murders and even told officers: ‘You’ll find my footprint on my dad.’

Lorraine Thorpe was 15 when, along with her ‘role model’ Paul Clarke, she tortured and beat Rosalyn Hunt and smothered her father Desmond to death.

Ms Hunt, 41, was beaten to death in Ipswich in 2009 following a row over a dog, with Thorpe responsible for kicking, punching and stamping on her head.

Lorraine Thorpe and Clarke carried out two days of torture on Ms Hunt including grating her face with a cheese grater and rubbing salt in the wounds.

Mr Thorpe, 43, a ‘vulnerable’ alcoholic, was smothered amid fears that he would tell the police about the first murder.

In a new documentary series, it is revealed how Thorpe was initially disregarded by police because of the horrific violence involved in the double murders.

The teenage killer then started boasting to her friends about how she tortured her victims and told police she had stamped her father’s head so hard it had left a trainer print, saying: ‘You’ll find my footprint on my dad.’

The show Britain’s Deadliest Kids, which airs tomorrow, reveals how Thorpe laughed uncontrollably throughout her trial after the savage killings.

Speaking in the documentary, DCI Rick Munns, the investigating officer who worked on the case, said of Thorpe during her initial police interview: ‘She didn’t show any particular remorse around the death of Rosie Hunt, and completely denied any involvement in her father’s death.’

As more evidence came to light, it became apparent that Desmond Thorpe was subjected to a similar level of violence to Rosalyn Hunt.

‘In my experience, I have never seen this level of violence, these types of injuries, enacted by a 15-year-old girl.

‘Usually, in cases like this, they will partake in some violence. But to be actively involved in such torturous activity, is incredibly rare.’

She said Lorraine Thorpe didn’t passively watch her father die but rather ‘actively engaged in the violence’ towards him.

Thorpe, who was diagnosed with ADHD, showed no remorse during her trial, and even giggled throughout the court proceedings.

‘No one stopped her. I felt disgusted, I felt like I wanted to jump over and just rip her head off.’

Clarke was sentenced to 27 years but was found dead in his cell four years later.

She was sentenced to a minimum term of 14 years in prison, making her eligible for release by the time she turns 29.

The judge ruled she had been brought up ‘with no real understanding of what is right and what is wrong’.

Mr Justice Saunders said she could be ‘manipulative’ and was not acting entirely under Clarke’s control, adding: ‘She found violence funny and entertaining.’

The judge said Clarke, also an alcoholic, was the ‘instigator’ in the murder of Ms Hunt, although Thorpe ‘played a full part’.

‘Far from being sorry, Lorraine Thorpe appears to have gloried in it, describing to her friends at one stage how she stamped on Rosalyn’s head,’ he said.

Dr Keri Nixon, a consultant forensic psychologist, said Thorpe’s crimes could have been avoided if she had never met Clarke.

She said: ‘I start to feel complete empathy for the girl that was let down by society and professionals. No girl should be living with her alcoholic father at the age of 12.

‘She was lost. She went from her mother to foster care, and then she ran away to be with her father and eventually social services lost her and she was living on the streets drinking with alcoholic men. That shouldn’t happen in our society.

‘I believe she was groomed by Paul Clarke and living a life that no teenager should be living.

‘But then we look at the level of violence she enacted on Rosalyn Hunt. It was so extreme, so vicious, and that’s where it’s difficult to look at the vulnerable girl.

‘Would those murders have taken place if she wasn’t part of that drinking community, and if she hadn’t met Paul Clark? No, I don’t believe they would have done.’

A girl thought to be Britain’s youngest female double murderer has been jailed for life.

Lorraine Thorpe, now 16, of Clapgate Lane in Ipswich, was found guilty in August of murdering her father Desmond Thorpe and a woman called Rosalyn Hunt.

Thorpe, 15 when the murders took place in 2009, was told at the Old Bailey she would serve at least 14 years.

Clarke, of Mountbatten Court, was also jailed for life and told he must serve a minimum of 27 years.

Mr Justice Saunders said Thorpe could be “manipulative” and was not acting entirely under Clarke’s control, adding: “She found violence funny and entertaining.”

The bodies of Ms Hunt and Mr Thorpe were found at separate addresses in Ipswich in August 2009.

Both Clarke and Thorpe had denied the charges and gave no evidence during their trial.

They had repeatedly beaten and tortured Ms Hunt and then smothered Mr Thorpe to death.

The judge said: “Far from being sorry, Lorraine appears to have gloried in it, describing to her friends at one stage how she stamped on Rosalyn’s head.”

He said the only “possible explanation” for her father’s murder was “the fear that he would go and tell the police what happened to Rosalyn Hunt”.

Mr Justice Saunders described the case as “exceptional” and the story of Thorpe “appalling”.

The court heard Thorpe and her father lived in “squalid” flats and sometimes even in tents.

“She was spending all her time with middle-aged alcoholics to whom violence had become normal,” the judge said.

“It had become part of their way of life. The alcoholics fought with each other.

“They stole in order to get the drink they craved.”

Social services could not keep track of her and when she was placed in a school she went back to her father, the judge told the court.

Through drinking the Thorpes met Clarke and lived at his flat for a time.

“She has been left with no real understanding of what is right and what is wrong,” Mr Justice Saunders said.

Graham Parkins QC, defending, said: “It was highly inappropriate for this young girl to be playing a role of carer to her drunken and indeed very frail father.

“She never really had much of a chance in life.”

Britain’s youngest female killer, Mary Bell, was held at the age of 11 in 1968 for the manslaughter of two boys aged three and four.