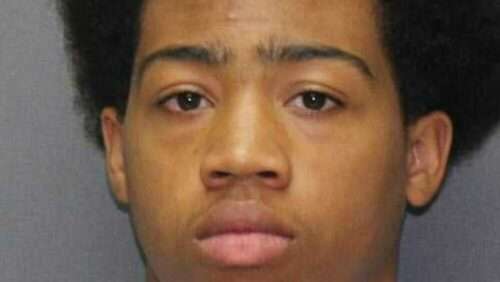 Naeshawn Perry was sixteen years old when he murdered his exgirlfriend in Maryland. According to police the teen killer and his ex girlfriend had an on and off again relationship that ended when Naeshawn Perry strangled the fifteen year old to death.

It took police over a year to figure out who was responsible for the death of Maleigha Solonka. Naeshawn Perry was ultimately linked to the murder through DNA and when his court process finally began he would plead guilty to murder. Naeshawn Perry was sentenced to life in prison however all of it but twenty to forty years was suspended.

An ex-boyfriend plead guilty Tuesday in the 2017 slaying of 15-year-old Maleigha Solonka.

Solonka’s body was found in a wooded area of Havre de Grace after she disappeared the day before her birthday. Officials said she had been strangled.

Naeshawn Perry, 19, was charged as an adult with first- and second-degree murder.

Solonka’s grandmother, Donna Elliot, said she has always suspected Perry, whom she described as Solonka’s ex-boyfriend, to be her killer. Elliot said Solonka was afraid of Perry for weeks before she disappeared.

A 19-year-old from Havre de Grace pleaded guilty in Harford County Circuit Court Tuesday to killing a 15-year-old girl and dumping her body in 2017.

Naeshawn Jaheim Perry pleaded guilty to one count of first-degree murder, according to court documents. As part of his plea agreement, he was sentenced to life in prison, with all but 20 to 40 years suspended, Harford County State’s Attorney Albert Peisinger said. Sentencing is scheduled for June.

Maleigha Solonka, 15, of Edgewood, was reported missing on Aug. 9, 2017, and found dead a week later in the woods on the 400 block of Webb Lane. Her body was discovered in a trash can, according to a news release from the Harford County State’s Attorney’s Office.

Medical examiners determined her cause of death was asphyxiation and it was ruled a homicide.

Police pinpointed Perry more than a year later, charging the then-16-year-old with first- and second-degree murder in August 2018. Authorities filed charges against him when “multiple items that were recovered during the investigation” underwent DNA analysis. He was held without bail after being charged.

Donna Elliott, maternal grandmother to Solonka, said that she could not believe the sudden plea.

She was stunned when she received a call notifying her, and she cried in court while watching it happen. Elliott said that this does not constitute closure, but she said that justice will be served come the day of Perry’s sentencing. She had custody of Solonka from 2012 onward.

“I do not think there is ever closure, I don’t believe in that because you will always grieve for your child,” she said. “Maleigha is getting the justice that she deserves.”

Elliott said Solonka and Perry were in a fractious, on-again-off-again relationship, which her granddaughter eventually “broke away” from.

Originally scheduled to begin Oct. 23, the trial was postponed after a jury could not be seated to hear the case. Threatening messages were also found scrawled in the courthouse’s elevator, with one reading “kill Perry.”

Perry’s defense attorneys motioned to move the case out of Harford County, but that motion was not granted.

The trial was scheduled to begin with jury selection Tuesday

A Maryland teenager has admitted he murdered his ex-girlfriend weeks shy of her 16th birthday, before he dumped her body in the trash.

Naeshawn Jaheim Perry, 19, pleaded guilty to one count of first-degree murder Tuesday in the killing of Maleigha Solonka, 15, according to court documents obtained by the Baltimore Sun. In exchange for his plea, Perry agreed to be sentenced to life in prison with all but 20 to 40 years suspended.

His jury trial was scheduled to begin on Thursday.

Solonka, 15 was reported missing on Aug. 9, 2017 and found dead in a trash can in a wooded area about a week later. Medical examiners ruled the girl was strangled before her body was dumped in the garbage, local television station WBAL reported.

Perry was 16 years old at the time of the killing, according to CBS Baltimore.

Perry was not charged as a suspect until nearly a year later, when investigators used DNA analysis on “multiple items that were recovered during the investigation,” police said according to the Sun.

“Mr. Perry was charged with murdering Maleigha Solonka after multiple items that were recovered during the investigation underwent DNA analysis,” Harford County State’s Attorney Albert J. Peisinger Jr. said in a statement Tuesday night obtained by Patch.com. “The Office of the State’s Attorney for Harford County sends its deepest condolences to the victim’s family for the tragic loss they have suffered.”

Solonka’s grandmother and guardian Donna Elliott told the outlet she was stunned by the plea.

“I do not think there is ever closure, I don’t believe in that because you will always grieve for your child,” she said. “Maleigha is getting the justice that she deserves.”

Elliot added that Molonka was involved in a difficult on-again, off-again relationship with Perry that she eventually broke off entirely.

“It has been extremely traumatic not knowing, depressing because everything kept getting postponed,” Elliott said. “My whole family is forever broken, but we can try to put some pieces back together.”

“She was very ambitious, beautiful, loved by everyone she met,” Elliot said of Molonka to CBS Baltimore.

Attorneys representing Perry did not respond to requests for comment from the Baltimore Sun. He is set to be sentenced on June 4, according to Patch.