Robert Hansen was a serial killer from Alaska who was known to kidnap his victims, fly them to a remote location and then hunt them down. According to the FBI Robert Hansen is responsible for at least seventeen victims however the number could be higher. In this article on My Crime Library we will take a closer at Robert Hansen the human hunter

Robert Hansen was born in Esterville Iowa on February 15, 1939. According to family members Robert had a grudge on his shoulder from an early age. He was afflicted with severe acne as a teenager that left scars behind. Hansen would grow more resentment for he felt the pretty girls in high school refused to date him due to his appearance. Robert Hansen began hunting at an early age spending long hours practicing with both archery and guns.

In 1957 he began a one year stint with the United States Army Reserve. In 1960 Robert Hansen would get married.

Robert Hansen was arrested for the first time for burning down a school bus garage which he felt was revenge for the way he was treated in high school. Hansen would be arrested, convicted and sentenced to three years in prison. While in prison he would be diagnosed with bipolar disorder. Robert would get out of prison after serving twenty months. His wife would divorce him while he was in prison.

Robert Hansen would be arrested a number of times over the next few years for petty theft. In 1967 Robert decided to move to Alaska with his new wife and two children

In 1971 Robert Hansen would be arrested on two occasions. The first took place when he kidnapped and attempted to sexually assault a housewife and the second was for the sexual assault of a prostitute. Robert would make a deal with the court and he would receive a five year sentence however he would serve ten months.

The FBI believe that Robert Hansen began killing the women he abducted began once he was out of prison. He tended to kidnap the women at gunpoint, sexually assault them and then fly them to a remote location in Alaska where he would hunt them down.

In 1983 a woman was kidnapped at gunpoint and forced into his vehicle where he drove her to her home where she was tortured and raped. The woman was chained around the neck and the chain was connected to a wall. The next day Robert Hansen was driving the victim to an airport where he kept his plane, the woman was able to escape from the vehicle and get to safety. Once the police were notified Robert Hansen dirty deeds came to light.

When the Alaska police had already begun investigating several murders around Anchorage where a variety of prostitutes were found dead. The Alaska police would contact the FBI who would send in their experts including Special Agent John Douglas who would give the Alaska Police a description which would lead them to narrow down their suspect list to one person: Robert Hansen

A police warrant was issued and Robert Hansen home was searched where authorities found a number of item belonging to missing women. Robert Hansen would blame the victims and would later confess to seventeen murders.

Robert Hansen realizing the evidence against him was overwhelming agreed to plead guilty to an assortment of crimes and would help police locate the victims that had yet been discovered. In the end Robert Hansen would be sentenced to 461 years in prison plus an additional life senence.

Robert Hansen would die in prison on August 21, 2014 from natural causes. 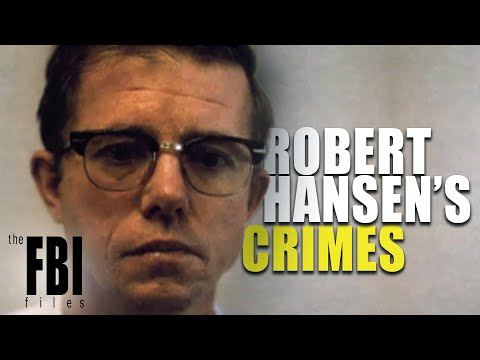 Frank Rothschild can still vividly remember the first time he laid eyes on “the Butcher Baker.”

The case of Robert Hansen, an Alaskan baker and avid hunter who murdered at least 17 women during the ‘70s and ‘80s, is the subject of a new documentary on Investigation Discovery (ID) titled “The Butcher Baker: The Mind of a Monster,” which premieres on Wednesday.

The special is part of the crime and justice network’s “Serial Killer Week,” where audiences can tune in each night and watch original programming that takes a closer look at some of the most infamous and seemingly forgotten murderers from over the years.

Hansen was convicted in 1984 after confessing to killing mostly dancers and prostitutes during a 12-year span. He was convicted of just four of the murders in a deal that spared him having to go to trial 17 times. The Anchorage baker also confessed at that time to raping another 30 women.

Hansen was previously the subject of a 2013 film titled “The Frozen Ground,” which starred Nicolas Cage as an Alaska State Trooper investigating the slayings. John Cusack portrayed Hansen.

Rothschild, the prosecutor who was integral in getting Hansen to confess, participated in the documentary. Rothschild told Fox News he was surprised when he first encountered Alaska’s best-known serial killer.

“He was a small guy,” Rothschild recalled. “He came across as a little mild-mannered sort of fellow. You didn’t initially have any sense of what he was hiding behind the mask. It wasn’t until we weren’t going along with his program of how the confession was going to go that I saw a very different Robert Hansen. When that happened, his face turned red and the hair stood up on the back of his neck. There was a monster. He acted it out. He got really upset. He was screaming at employees for 10 minutes.”

During the ‘70s and ‘80s, Hansen was a bakery owner who depicted himself as a family man. His wife, a devout Christian, knew nothing of his other life.

At the time, construction of the 800-mile trans-Alaska oil pipeline in the ‘70s brought sex workers, pimps, con artists and drug dealers looking for quick riches during the construction boom. Sudden disappearances among them were commonplace.

“Anchorage at the time was perfect for someone like Robert Hansen,” Rothschild explained. “It was a place for someone like Hansen to easily lure women into his grasp. … [His victims] were all young women, mostly runaways, who really had no family support and were out in the world on their own. Most of them didn’t even make it through high school. … For many, this was a place for them to make money and survive.”

Rothschild pointed out that, initially, Hansen’s victims included any woman who caught his eye. However, he quickly learned that strippers and prostitutes were not only harder to track, but also less likely to be missed.

“Hansen learned he needed to take women who weren’t easily believed or cared about by the community or police the same way,” he shared. “He thought like a hunter.”

Hansen would abduct his victims and take them to remote places outside the city either by his car or private plane. According to investigators, Hansen raped the women in some instances but returned them to Anchorage, warning them not to contact authorities. But at other times, Hansen would release the women in the wilderness and then hunt them down with his rifle.

Hansen later told investigators that one of his favorite spots to take his victims was the Knik River, which is located northeast of Anchorage.

While his wife and children were out of town, he would bring home jewelry owned by the women as mementos and hide them out of sight. And since Hansen was an avid hunter who also worked odd hours, his wife, Darla Hansen, never suspected he had a double life.

“Hansen would get in his car and drive around downtown Anchorage, looking at all these young women walking up the street,” said Rothschild. “He would get aroused and excited about getting back in the game — his game.”

Out of the 17 women Hansen confessed to killing, only 12 bodies were discovered. The others were never found.

Rothschild said that Hansen’s childhood may have possibly played a role in his rage that he would later act out on his victims. Growing up, Hansen was a scrawny child whose face was scarred from severe acne. He also was afflicted with a stutter. This easily made him a target.

“The people who particularly made fun of him, that really, really got to him, were young girls,” Rothschild explained. “And so the attitude he developed about the female sex came out of those times. And the rage inside of him was actually evidenced by his years in school when he burned down the school bus barn. From what we know, that was his first real crime… I’m not a psychologist, but this rage that was developed in adulthood came from those childhood experiences.”

Rothschild said Hansen wasn’t caught sooner because his victims were those who were “hardly missed” by society. Oftentimes, their families weren’t even aware of their whereabouts. Some suspected they either headed to Hawaii for the next opportunity or suffered an overdose. But also, those who survived Hansen’s wrath weren’t instantly believed.

“Look at the Cindy Paulson case,” Rothschild pointed out, referring to the teenage sex worker Hansen abducted, raped and tortured in the basement of his home.

According to the Anchorage Daily News, Paulson saw an opportunity to make a run for it as Hansen loaded his plane where he would fly her off on a one-way trip to the wilderness where she would face certain death.

“My gosh, she is running naked and in handcuffs on the streets of Anchorage scared to death,” Rothschild continued. “You saw the fear of death in her eyes. She describes the airplane, the house, the basement — all belonging to Robert Hansen. She directs the officer to the house. It’s exactly the way she describes it. … But the man who ran the sexual assault unit at the time … had the worst kind of bias and experience to run a sexual assault unit.

“All the facts are there. There’s no question she had this horrible experience. This wasn’t just a sex deal gone bad. But Hansen cooks up this alibi. This guy, the head of the sexual assault unit, hears the alibi and then says, ‘There’s no case here.’ There just wasn’t a drop of empathy for a rape victim. … That always upsets me.”

But that 1983 case was a turning point. According to the outlet, police with search warrants went through Hansen’s home several months later and found evidence to eventually charge him with four murders.

Hansen was serving a 461-year sentence in Alaska at the time of his death in 2014 at age 75. He had been incarcerated at the Seward state prison and was moved that year to the Anchorage Correctional Center to receive medical attention as his health declined. Alaska Department of Corrections spokeswoman Sherrie Daigle said at the time that Hansen had a “do not resuscitate” order on file.

Rothschild hopes the documentary will make viewers realized victims of assault and rape should be believed.

“When people are confronted with their terrible lies and vile acts, they lie their a— off,” he said. “For Robert Hansen, it was always denial, denial, denial. You can confront people with their misdeeds and they can still look at you right in the eye and say, ‘I didn’t do that.’ It happens all the time.”