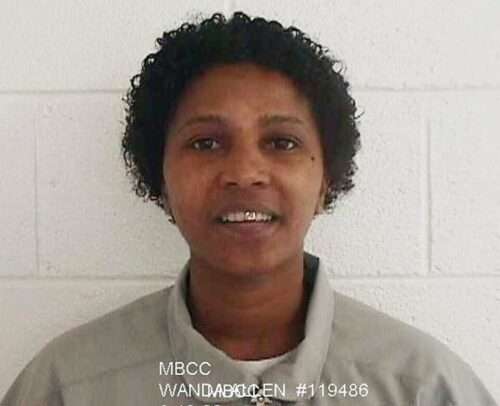 Wanda Jean Allen was born on August 17, 1959 the second of eight children to a family that struggled by on social assistance. When Wanda Jean was twelve years old she was hit by a truck and knocked unconscious and two years later she was stabbed in the temple.

Wanda Jean Allen whose IQ was reported at 69 had a significant amount of brain damage from the two traumatic incidents. By the age of 17 Wanda Jean would drop out of high school.

Wanda Jean Allen was living with a girlfriend in 1981 when she would fatally shoot the other woman. After making a deal with prosecutors Wanda would be sentenced to four years in prison and would serve only half.

In 1988 Wanda Jean Allen was living with Gloria Jean Leathers, the two women had met in prison and their relationship was very rocky. In December of 1988 Wanda Jean and Gloria were involved in an argument at a grocery store that was broken up by a police officer. While Gloria and her mother were heading towards a police station to file a restraining order Wanda Jean would jump out and shot Leathers in the stomach, Gloria would die three days later in hospital.

At trial Wanda Jean Allen lawyers tried to get their client off on self defense pointing to Leathers criminal history that showed she had stabbed a woman to death in 1979. Unfortunately Wanda Jean Allen history also had a murder in it as well and the jury would convict and sentenced her to death.

Wanda Jean Allen would spend twelve years on death row before her execution was carried out on January 11, 2001 by lethal injection

On Jan. 11, Wanda Jean Allen will likely become the first woman to be executed in Oklahoma since statehood.

She hopes that the state Pardon and Parole Board and Gov. Frank Keating will commute her sentence to life without parole. But if that doesn’t happen, the 41-year-old says she is at peace.

“I have peace right here,” she says, tapping her chest. “And as long as I am all right with Him, I am not afraid of what man can do to me.”

Her victim and one-time lover, Gloria Jean Leathers, died four days after being shot at close range in 1988 by Allen in front of the Village Police Station in Oklahoma City.

“I couldn’t tell you what was happening as far as mentally,” Allen said from behind the glass that separates visitors from inmates at the Mabel Bassett Correctional Center in Oklahoma City. “I was there physically, but not mentally there. But I know it was a tragic accident that day.”

Wanda Jean Allen said she and Leathers were both out of control.

Leathers had called her mother to pick her up from the house where she and Allen lived. After packing her belongings, Leathers and her mother went to the police station to file a compliant against Allen.

On Oct. 13, Ruby Wilson met with her daughter’s killer.

“I wanted to tell her how sorry I was for taking her daughter’s life. And I know there is no greater love than a mother’s love for a child because I have a mother as well. And I asked for her forgiveness. She forgave me. We prayed together. And I let her know I loved her for coming that day.”

Leathers and Allen met in prison. Allen was serving a 4-year sentence for manslaughter. On June 29, 1981, at a motel in Oklahoma City, Allen shot to death Detra Pettus following an argument with Pettus’ boyfriend.

“We was friends,” Allen said of Pettus. “We grew up together. We lived in the same neighborhood. We had mutual friends.

While some prosecutors say that Allen and Leathers had a relationship in prison, Allen said that was not the case.

Wanda Jean Allen was released from prison before Leathers. When Leathers got out, she called Allen.

“She didn’t have a place to stay,” Allen said. “She and her family were having problems. I allowed her to come and live with me because I know how hard it is when you get out.

“By me being locked up, I understood that situation. You have to help people when they get out. Someone had helped me when I got out, so in turn I wanted to help someone as well.”

The pair lived together on and off for three years. She described Leathers as funny and witty.

At her trial, Oklahoma County prosecutors painted Allen as a person who hunted down her victims. Prosecutors introduced a card Allen had given Leathers.

The card had a gorilla on it. The printed message said, “Patience my ass. I am going to kill something.” Inside, Allen had written, “Try and leave me and you will understand this card more. Dig. For real, no joke.

Leathers was portrayed as meek and timid.

Wanda Jean Allen said her attorney was not given a fair shot at defending her and was limited in what he could present. In 1979, Leathers was arrested in Tulsa for the stabbing death of Sheila Marie Barker, whom she killed outside a Tulsa disco. A judge later determined the slaying was self-defense.

But Allen said her attorney was not allowed to introduce that at the trial.

Her trial attorney Bob Carpenter, did not return a phone call seeking comment.

In her first interview in 12 years, Wanda Jean Allen talked about her childhood, family, who she is and who she is not.

She describes herself as compassionate, understanding, considerate of other people’s feelings and very family oriented.

I am not a monster,” Allen said. “I am a human. I laugh and I cry, just as you do and others. I am not a vengeful-type person. I don’t try to hurt people.”

Allen was the oldest girl among eight siblings.

“We had love,” Allen said. “We didn’t have a lot of financial support or materialistic things. But we had love in the house.”

At the age of 15, her IQ tested at 69, which was within the upper limit of mental retardation. Later, she was tested at an IQ of 80.

“I think my motor skills are different from other people that can comprehend things faster. I am not as fast at getting things as some people. I am slow in that area. But over the years, you know, you deal with your handicap. To be in society, you have to deal with that. It can be a limitation on what you can do.”

Wanda Jean Allen graduated from U.S. Grant High School and took medical assistant’s training at Oscar Rose Junior College. She worked at a veterans’ hospital and at the Oklahoma City Golf and Country Club, among other jobs.

She is one of three women on death row. On Sept. 14, all three got baptized.

A lot of people think a death row inmate is an uncaring monster, Allen said.

“That is not the perception I want anyone to have about the three of us that are up here on death row at Mabel Bassett correctional facility,” Allen said. “We are humans. We care for other people. We feel what they are going through. Even if we are in a worse position than they are, we still focus on them.”

Wanda Jean Allen is locked down 23 hours a day, seven days a week.

She has no personal property in her cell, other than a television and radio. She is a fan of the Chicago Bulls, likes opera and reads John Grisham and Danielle Steele novels.

She repeatedly talks about her family. Her mother, Mary Allen, lives a few miles from the prison that has housed her daughter for 12 years.

Wanda Jean Allen says she has a need to help people. If she could talk to children, she would tell them to stay close to their family and be independent.

“A life of crime ain’t where it is at,” she said. “You don’t have to prove nothing to no one. And if you are put in that positions where you have to provide something to someone, you don’t need to be around that person.”

In December, Allen will make an appearance before the five-member Oklahoma Pardon and Parole Board.

“I am not nervous,” she said. “I am going to tell them what is my heart. Be direct with them. Tell them how I feel. Ask them to spare my life.”

Wanda Jean Allen has not been told much about the execution process, which is carried out shortly after 9 p.m. by lethal injection at Oklahoma State Penitentiary in McAlester.

“If it came to it, I will just have to deal with those circumstances. My faith is strong. I know who has the last say so. I am talking about God.”