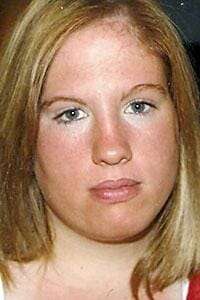 Hayley Bowden was sixteen when she murdered an elderly woman. According to court documents Hayley and her boyfriend were staying in a home without permission, when the victim found them instead of leaving the couple would stab the man repeatedly causing his death and attempted to burn the house down. Hayley and her boyfriend would steal his truck which was recovered in a pond. The two would eventually be arrested and found guilty on the robbery and murder charges. Due to her age the teen killer was sentenced to forty years in prison

A teenager who stabbed an elderly man in Walton County a couple of years ago finally plead before the court Tuesday.

According to State Attorney Bill Eddins, Hayley accepted an open plea for First Degree Premeditated Murder and/or Felony Murder along with other charges on October 6th in lieu of taking her case to trial.

She could face life in prison when sentenced on January 19, 2016.

Bowden stabbed 77-year-old Arthur Anderson after he discovered that she and her boyfriend Crispin Ramirez were living in a DeFuniak Springs home for which he was the caretaker.

According to the state attorney’s office, Bowden then collected several items from the residence and loaded them into one of Anderson’s vehicles while Ramirez set fire to the house and his other automobiles.

Officials say the two were later apprehended by the Walton County Sheriff’s Office but not before Ramirez threatened deputies and exploded homemade fire bombs to resist arrest. We are told Bowden fled into the woods.

The state attorney’s office says Bowden confessed to all the crimes she was charged with after being arrested.

Ramirez made a deal with the state back in September 2014, to avoid the death penalty. He plead guilty to First Degree Murder and will spend the rest of his life behind bars.

Hayley Bowden, who at the age of 16 participated in the 2013 killing of elderly Mossy Head resident Arthur Anderson, was sentenced Tuesday to 40 years in prison.

Circuit Court Judge Kelvin Wells ordered Bowden to serve 40 years on one count of felony murder, 40 years on a count of burglary with assault and five years for grand theft.

The sentences will be served concurrently, however, and Bowden, by virtue of her age, will be eligible in 25 years for a review of her sentence, said Assistant State Attorney Josh Mitchell, who represented the state at Tuesday’s sentencing hearing.

Bowden’s boyfriend at the time of the crime, then 22-year-old Crispin Ramirez, was sentenced to life in prison in September of 2014 for his role in the Anderson killing.

Anderson was a caretaker for a home on West Juniper Avenue in Mossy Head on Jan. 24, 2013, when he confronted Bowden and Ramirez and was stabbed to death, according to news reports.

Bowden had run away from home and she and Ramirez had taken up residence in the home Anderson was looking after.

Both Bowden and Ramirez “participated and contributed to the death of Mr. Anderson” by repeatedly stabbing him, Mitchell told the court last year when Bowden agreed to plead guilty.

Walton County deputies were unaware Bowden and Ramirez had killed Anderson when they originally encountered the two Jan. 24. They were looking for a runaway, but arrested the pair when Ramirez threatened officers with a knife, reports said.

Suspicions rose when Anderson’s truck was found in a pond near where the stabbing took place.

Bowden and Ramirez had stolen Anderson’s vehicle and also attempted to burn down the home where they’d left his body.

One reason for the delays in sentencing Bowden was that her attorneys had filed motions calling the defendant’s competency into question.

“We’ve been back and forth over the last year trying to get this resolved,” Mitchell said

teenage runaway and her boyfriend are accused of murdering a 77-year-old Walton County man Thursday night.

The suspects and the victim are all from Walton County’s Mossy Head community.

Walton County Sheriff Michael Adkinson announced the charges early Friday afternoon, saying that the two had already been tracked down by the time the murder came to light. After 16-year-old Haley Nicole Bowden had been reported as a runaway, a tip led deputies and tracking dogs to a home in the Mossy Head Community. They found her there with 22-year-old Chrispen Ramirez on Thursday at a dwelling on Eagles Way. When officers approached, Bowden and Ramirez ran away, officials said. K-9 units were put on their trail and tracked the two down.

Ramirez was armed with knives at the scene and threatened the lives of deputies, authorities reported in a press release about the chain of events leading to the arrests of Bowden and Ramirez and the charges against them. Deputies were able to subdue Ramirez and took him to jail, along with Bowden, on various charges related to that encounter. At that point, Ramirez was charged with interference with child custody and assault on a law enforcement officer. Bowden was charged at that point with resisting an officer without violence.

But officials would soon level more serious charges against them.

Around the same time they were being processed into the jail, other events were unfolding elsewhere. Deputies had been sent to Beaver Dam Road to investigate a trespass complaint. The caller told authorities that someone had come onto private property and abandoned a vehicle there.

The car was found partially submerged in water, with the tag missing.

Officers identified the owner of the vehicle as 77-year-old Arthur Gerald Anderson and went looking for him.

During the course of their search, his family members told investigators that they hadn’t seen him in a few days. Deputies found Anderson’s body a short time later at a location not far from where the vehicle had been found.

“Further investigation revealed Bowden and Rameriz murdered Anderson after he confronted them for entering a residence on West Juniper Avenue he was a caretaker of,” the press release stated. “The couple then attempted to burn the residence, stole Anderson’s vehicle, and dumped it later.”

In connection to the Anderson death, Ramirez and Bowden have each been charged with arson and an open count of murder.

The investigation is ongoing.