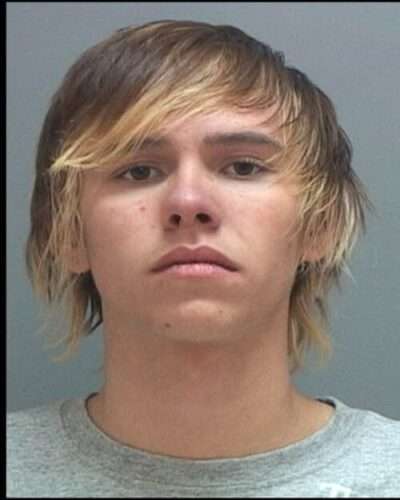 Rosco Brackett was a week away from turning seventeen when he fatally shot his stepfather. According to court documents Rosco Brackett and the victim were involved in an argument about school when Rosco grabbed a gun and fatally shot the victim. This teen killer would plead guilty to the murder and would be sentenced to life in prison

A teenager has pleaded guilty to manslaughter and felony discharge of a firearm in the September 2012 shooting death of his stepfather in West Valley City. Rosco Brackett was a week short of his 17th birthday when he killed 52-year-old James George in the home where they lived with the teen’s mother. Brackett is accused of killing George during a fight about school. Family members of the victim testified that the two had a strained relationship.

The{}Salt Lake Tribune reports the 19-year-old Rosco Brackett is scheduled to be sentenced May 15.Prosecutors say the family kept more than 18 firearms in the home, and Brackett went for a gun in the living room when he saw his stepfather turn toward the bedroom, where other guns were stored

A 16-year-old West Valley boy was charged as an adult Tuesday with murdering his stepfather.

Rosco Dewayne Brackett, who turns 17 on Wednesday, was charged in 3rd District Court with murder, a first-degree felony; obstructing justice, a second-degree felony; and illegal discharge of a firearm, a third-degree felony.

On Sept. 13, Brackett got into an argument with his stepfather, James Michael George, 52, at their house at 6800 W. 3700 South. Brackett walked away from the argument to get a handgun in the front room and fired a shot at George, missing him, according to the charges.

“(Brackett) then fired another shot which hit George in the head. After George fell to the floor, (Brackett) shot George repeatedly,” the charges state.

Prosecutors say Brackett then hid the handgun and threw away his shirt.

Brackett was originally booked into juvenile detention but prosecutors decided to charge him as an adult. Bail was set Tuesday at $1 million.

A West Valley City teen who fatally shot his stepfather three years ago was sentenced to the maximum punishment on Friday —a prison term that could keep him behind bars for the rest of his life.

Rosco Dewayne Brackett, now 19, pleaded guilty in January to one count each of second-degree felony manslaughter and first-degree felony discharge of a firearm in the 2012 slaying of James Michael George.

Third District Judge Katie Bernards-Goodman ordered Brackett to serve consecutive terms of one to 15 years on the manslaughter count and a term of five years to life on the firearms charge — a punishment she said she would order in spite of Brackett’s expressions of regret and the progress he has made in jail over the past three years.

“I have no doubt that you are a different person now, and that sober, you would not have done what you did,” the judge said.

Brackett, who goes by his initials J.D., had appealed to Bernards-Goodman to give him a chance at a better, more productive life, telling the judge about his success earning a GED, completing substance abuse programs and working while in jail. He also said he was deeply sorry for his actions, noting that he stills considers his stepfather’s family his own, and prays for them daily.

“There are not enough years in my life to give back what I have taken from this family,” said Brackett. “I reacted poorly, I am haunted by this each and every day.”

Brackett was initially charged with first-degree felony murder, along with felony discharge of a firearm and obstructing justice for allegedly hiding a gun and getting rid of the shirt he was wearing during the alleged shooting.

Brackett was a week short of his 17th birthday when he killed George during a Sept. 13, 2012 argument at the family’s home, near 3700 South and 6800 West, about school and the teen’s efforts to get his GED.

In court papers, prosecutors say when George, 52, walked away from the argument, Brackett got a gun from another room and shot at his stepfather, but missed. The teen then shot George in the head and several more times after he fell to the floor, the documents say. George died the next day.

On Friday, George’ family, including a son and a sister, told Bernards-Goodman they were devastated by seeing George lifeless in a hospital bed before his death and begged the judge for the maximum sentence.

Although she didn’t speak Friday, Brackett’s mother had written the judge, praising her son’s progress and saying she believed that given a chance, he could lead a productive life and be a role model for others.

“I do know he has to be punished for what he did,” the letter states. “I just hope and pray you can see the good him and give him a chance to become someone, instead of someone who comes in and out of the system because that is all they know.”

Brackett, who was charged in adult court, initially denied any role in the fatal shooting, but had said he believed his stepfather was leaving the room to get a gun, so he had fired a warning shot.

During an evidence hearing in 2103, family members said the two men had a “strained” relationship, and Gina George said her controlling and demanding husband considered her son “baggage.”