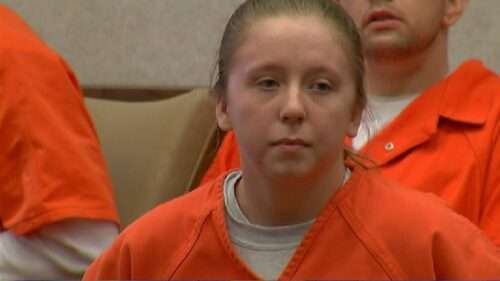 Kassi Brandeberry was seventeen years old when she set a house on fire in Ohio killing a fourteen year old teenager and severely injuring another teen, a firefighter was also injured fighting the deadly fire. According to this teen killer lawyers she did not realize that anyone was home when she set the fatal fire however this teen arsonist would be convicted of murder and attempted murder along with a host of other charges. Kassi Brandeberry must serve at least fifteen years in prison before she is eligible for parole.

The Toledo teen who admitted to starting a fire that killed a 14-year-old and injured another teen could spend the rest of her life in prison.

Kassi Brandeberry, was sentenced to 21-years to life in prison on Tuesday in Lucas County Common Pleas Court. She pleaded guilty in April to one count of murder and two counts of aggravated arson for the May 2, 2015 fire that killed Joseph Fazenbaker and seriously injured Michael Rheinbolt.

Fazenbaker, 14, was killed in the fire at 235 Willard in Toledo.

Kassi Brandeberry, who was a 17-year-old at the time of the fire, was sentenced on one count of murder, two counts of aggravated arson, and one count of burglary. Her sentences total 21 years to life in prison. Judge Duhart told the court that the sentences will be served consecutively out of a necessity to protect the public from the danger posed by Brandeberry.

Rheinbolt was severely injured in the fire, causing him to undergo weeks of treatment for kidney failure and other injuries. A Toledo fireman was also injured as a result of the intentionally-set fire. “I want to acknowledge the harm you’ve caused to the fireman that was involved in this act,” Judge Myron Duhart said at Tuesday’s sentencing. “Part of his job is to fight fires and protect the community. (He) didn’t deserve that either. You’ve put just so many people in harms way.”

The teen’s defense attorney addressed the court prior to sentencing, saying Kassi Brandeberry’s rough troubled youth contributed to her poor judgement on the night of the fire. “You could probably teach a PhD course in psychology based on her first 17 years of life,” Brandeberry’s attorney said of her childhood. “She didn’t realize, when she decided to set fire to the house, that there were people inside the house. Her intention was not to take someone’s life.”

“I understand that you have gone through and did go through some dysfunction in your life, but who hasn’t,” Judge Duhart said. “That does not justify those type of actions, Ms. Brandeberry. Where do you get that from?”

Judge Duhart also ordered Brandeberry to register as an arson offender upon her release from prison. She must also pay more than $13,000 in restitution to the family’s of her victims, and including $1,089 to the Toledo Fire and Rescue Department for costs of their investigation into the fatal fire.

Rheinbolt said outside the courtroom that he believes the sentence handed down was fair, but did not feel that Brandeberry’s comments in court were genuine. “I feel like, even after Kindergarten, somebody knows the difference between right and wrong.”

A Toledo teen has been sentenced for the murder of 14-year-old Joseph Fazenbaker.Kassi Brandeberry was sentenced to 21 years to life Tuesday.

Last month, Brandeberry admitted to setting the fire that killed Joseph and severely burned his step-brother, 13-year-old Michael Rheinbolt. Investigators say she was trying to get back at her boyfriend

Family members were allowed to address the teen while in court Tuesday.

“You cannot begin to understand yet at your level of maturity the amount of harm that you have caused,” said Judge Myron Duhart.

Kassi did acknowledge her mistake and apologized to the victim’s families.

“I’m not proud of it, I am ashamed. There is no excuses for this behavior,” said Brandeberry.

Despite her tearful apology, the Honorable Myron Duhart handed her a strict sentence.

“As to count two, you will serve 15 years to life,” said Duhart.

It’s a punishment that will not bring back Joseph, but can help make a family whole again.

“We just want to put this behind us and move on, just put it behind us and go. It’s been so, so painful. So, I hope everyone can pick up and move on from here,” said Ruth Reinbolt, Michael’s mother.

Back in June of 2015, it was decided that Brandeberry would be tried as an adult. She faced life without parole, but took a plea deal in April.

Before Tuesday’s sentencing, both Rheinbolt and Brandeberry spoke. Rheinbolt talked about all he’s lost, including his step-brother. Brandeberry gave her apologies to the family.

A 17-year-old girl has been indicted as an adult on an aggravated murder charge in a Toledo house fire that killed a 14-year-old boy and seriously injured his 13-year-old stepbrother.

Kassi Brandeberry was indicted on eight counts Tuesday. The most serious charge against her carries a maximum penalty of life in prison without parole.

Prosecutors say there is DNA evidence and surveillance footage linking her to the fire in early May.

A police department spokesman has said that investigators believe the girl had a personal problem with one of the victim’s family members.

Court documents do not list an attorney for Brandeberry. Her defense attorney in juvenile court where she originally appeared denied the charges against her.