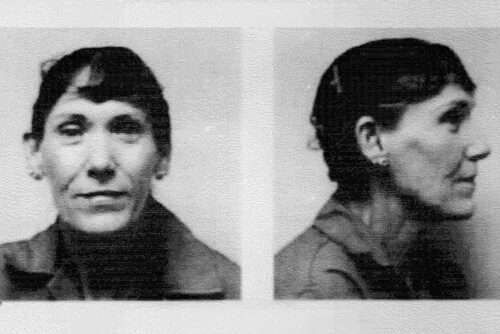 Judy Buenoano was a serial killer who was convicted of two murders but believed to be responsible for several more. Judy Buenoano would be executed by the State of Florida on March 30, 1998

Not a lot is known about Judy Buenoano early life however she would marry James Goodyear who would die in 1971 in what doctors believed at the time to be by natural causes.

Judy Buenoano would move in with Bobby Morris in 1973 and he would die in January 1978. In 1980 Judy son Michael would become sick with an illness that took away the use of his legs. Later that year Michael would die when he fell from a canoe and drowned.

In 1983 Judy Buenoano was involved with John Gentry who would later be severely injured when his car exploded. When police were investigating the case they learned that there were sketchy moments in the history of Judy Buenoano.

It turned out Judy was telling friends that Gentry was suffering from a terminal illness in the months before his accident and police would learn that she was giving him vitamins that were laced with arsenic.

Police would exhume the bodies of her first husband, her son and Bobby Morris all of which had arsenic in their systems.

Judy Buenoano would be sentenced to death for the murder of James Goodyear, a life sentence for the murder of her son and a twelve year sentenced for the attempted murder of Gentry. Judy would also be convicted of a number of fraud charges relating to collecting the insurance money after each victim died.

On March 30, 1998 Judy Buenoano was executed in the electric chair at Florida State Prison.

one were the painted, manicured fingernails and the fashionable dark hair. Gone was the tough-edged woman who drove around Pensacola in a Corvette and told bigger-than-life stories about her life, her businesses and her Chanel perfume.

Judy Buenoano walked shakily to Florida’s electric chair Monday, her head freshly shaved. Guards had covered it with gel – highlighting every bump, every vein – to conduct the electricity better. She wasn’t the same person who had boasted that Florida would never execute her. She was, simply, an old, frightened woman.

Prosecutors called Buenoano the “Black Widow,” saying she attracted men to kill them for insurance money. She was executed for killing her Vietnam veteran husband with arsenic in Orlando 27 years ago, but Pensacola juries also found her guilty of drowning her paralyzed son in 1980 and trying to firebomb her boyfriend in 1983.

She had gotten about $240,000 in insurance money from the deaths of her husband, son and a common-law husband who died of arsenic poisoning in Colorado in 1978. Prosecutors said she had used some of the money for a new car, for a diamond ring, to start her nail salon, to live the high life.

She might have gotten away with her crimes, they said, if she hadn’t botched the bombing and left a trail back to her.

Florida had not executed a woman since 1848, when a freed slave was hanged for killing her former master. Because of that, Buenoano’s death attracted widespread media attention. Early Monday, lights from TV cameras and satellite trucks rivaled those beaming from Florida State Prison. Reporters outnumbered protesters.

Judy Buenoano met with her two children, a cousin and her spiritual adviser through the night. They had Communion and a final contact visit. Buenoano dozed from 1 until 4 a.m., when she received a last meal of steamed vegetables, fresh strawberries and hot tea.

Throughout Sunday, she had been talkative and upbeat, a corrections spokesman said.

But when she entered the death chamber shortly after 7 a.m., Buenoano held tightly to the hands of two male guards who helped her walk. She was pale and terrified. But she seemed determined to face her death with a kind of stoic dignity.

As authorities strapped her in, she grimaced, especially as they tightened the belt around her chest. Through most of the preparations, she kept her eyes shut, not looking at the people who gathered to watch, including her spiritual adviser and the brother-in-law of Air Force Sgt. James Goodyear, her poisoned husband.

Asked whether she had a last statement, Judy Buenoano said in a barely audible voice, “No, sir.” Moments later, as the current flowed, her fists clenched. She seemed almost dwarfed in the 75-year-old oak chair. Smoke rose from the electrode attached to her right leg.

The witnesses watched silently. In the front row sat Orange-Osceola Chief Judge Belvin Perry, who prosecuted Buenoano in 1984. Next to him was Dusty Rhodes, who as a state attorney investigator had gathered evidence against Buenoano in the Goodyear case.

The two had become experts on arsenic. They had watched the exhumation of Goodyear’s body to check for poison. They had tracked down a witness who said Buenoano told her not to divorce her husband but instead kill him with arsenic. But you’ll need the stomach for it, the friend quoted Buenoano as telling her.

“It was very serene, clinical,” Perry said of the execution. “It brings finality and a final chapter in this saga.”

As they drove home from Starke on Monday, the two talked about how Buenoano’s death had been humane compared with the agony Goodyear endured and the pain her 19-year-old son, Michael, felt as he drowned in a river with braces on his arms and legs.

But family members described a different Judy Buenoano. They called her a devoted Roman Catholic, a beloved mother and grandmother, a woman who had had a tough childhood but went on to raise a family of her own. They said the case against her was circumstantial and called prosecutors overzealous and high courts cowardly for not setting aside her death sentence.

Sunday, before they entered the prison to say goodbye to their mother, Buenoano’s daughter, Kimberly Hawkins, and son, James Buenoano, stood before cameras and asked the state not to commit a “hate crime against God and humanity.”

The pleas did not work. The courts refused a last-minute stay.

Twelve civilian and 12 media witnesses, plus corrections officials, were stuffed into a tiny room separated by glass from the death chamber. Female guards were brought in to be with Buenoano in her final days. One of them walked into the chamber with Buenoano, but male guards handled the execution.

Outside, death-penalty opponents and supporters waited for word on the execution – the third in Florida in eight days.

Members of Pax Christi, a state group organized with the Roman Catholic Church, held signs that read Buenoano is “a woman not a spider.”

“Executions are just an excuse for vengeance toward people,” said Martina Linnenahm, a member of the group.

Death-penalty supporters included Larin Cone, whose brother, Floyd Jr., was killed in 1981 when Edward Kennedy escaped from prison and shot him and a state trooper to death. Kennedy was executed in 1992.

Cone said Judy Buenoano did not deserve mercy because of her gender. “She killed just like a man,” Cone said, “so she should receive the same treatment as a man.”

Wayne Manning of Lawtey had a day off from work, so he brought his 7-year-old grandson, Steven, to the prison.

“He needs to learn what is going on in this world,” Manning said. “Maybe he won’t get into a situation like this, himself, if he is exposed to it now.”