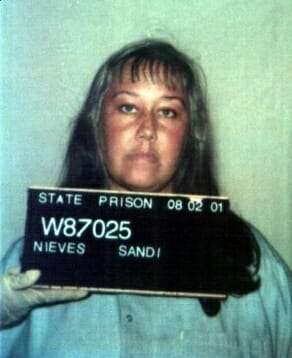 Sandi Nieves is on California death row for the murders of her four children. It seemed that Sandi Nieves was mad at her estranged husband and in order to prevent him to get custody of her five children she killed her four children by placing them all in sleeping bags in a room then setting the house on fire. The fifth child was able to escape the burning home suffering smoke inhalation. Sandi Nieves would ultimately be tried for all four murders plus the arson and would be convicted on all counts and would be sentenced to death

As 16-year-old David Nieves took to the stand, he glanced at the woman he used to look up to.

His mother Sandi Nieves, then 36, was on trial for the most unforgivable crime.

And now their own mother stood accused of starting the blaze deliberately.

But why would Sandi Nieves want her own children dead? And what had pushed her to carry out such a heinous crime?

It was reported that Sandi Nieves was born and raised in a dysfunctional environment.

She was married twice. First to Fernando Nieves, with whom she had David, Nikolet and Rashel.

After a three-year marriage, the couple divorced and Sandi Nieves had custody of their three children.

In the years that followed, Nieves married her second husband, David Folden. It was reported he was also her former stepdad.

He adopted her children, then the couple went on to have Jaqlene and Kristl.

After splitting from Folden after eight years, she reportedly started dating a much younger man.

But, again, things didn’t work out and he left her.

Around the same time, Nieves was fighting hard to hang onto her kids in an ugly child-support battle with Folden.

That, coupled with the string of failed relationships, made Nieves a bitter and angry woman.

Scorned, she wanted to hurt her exes. And she decided the best way to do that was through their children.

So, in July 1998, Nieves gathered the kids in the kitchen and told them they were having a slumber party.

The kitchen had a TV and video player. The kids had never slept in there before, and found the idea exciting.

They watched films, then nodded off in sleeping bags.

While they slept, Nieves poured gas on the carpets and set them alight.

When the children began waking up gagging from the smoke, Sandi Nieves ordered them to stay where they were.

By the time firefighters responded to a call at the house, the four girls were tucked up in sleeping bags, dead.

Sandi and David were rushed to hospital for treatment for smoke inhalation. Both survived.

But poor David was now an only child. And his own twisted mother was to blame.

It seemed she’d killed her children for no other reason than to hurt her exes.

The California Supreme Court on Monday reversed the death penalty for a woman who killed her four young daughters and tried to kill her son by setting their house on fire 23 years ago.

But they overturned her death sentence “due to the trial court’s misconduct.”

The judge was frustrated that the defense lawyer kept violating court procedures despite repeated warnings and sanctions, and also openly doubted the credibility of defense witnesses, the justices found.

“Ultimately, the trial judge’s conspicuous disdain for defense counsel and witnesses, and his repeated references to their improper or untrustworthy conduct, lent credence to the prosecution’s argument that defendant was manipulative and deceitful,” Chief Justice Tani Cantil-Sakauye wrote.

“These were the very characteristics the prosecution highlighted to justify the death penalty.”

Los Angeles Superior Court Judge L. Jeffrey Wiatt killed himself in 2005 after he was questioned by detectives on an unrelated matter.

Nieves was one of 23 women on California’s death row, and is housed at the Central California Women’s Facility in Chowchilla. There are 682 men on the nation’s largest death row, though California has not executed anyone since 2006 and Gov. Gavin Newsom has imposed a moratorium.

Nieves called firefighters July 1, 1998, to report her house was on fire. The blaze was out by the time they arrived and they found her sitting in the living room with her 14-year-old son, covered in soot.

Her our daughters, ages 12, 11, 7, and 5 were lying on sleeping bags in the kitchen, all dead of smoke inhalation. Gasoline had been poured and ignited in the hallway and bedrooms, and the oven was open with burned items inside.

Nieves was upset over the end of a relationship and had a stormy past with the fathers of her children, according to the court.

Her son and two oldest daughters were from her first marriage, the two younger girls from her second, and a third man had just broken up with her for the second time after learning she was pregnant. She had threatened suicide and had an abortion a week before the fire.

In a note to her second husband postmarked the day of the fire, she wrote “Now you don’t have to support any of us!” She sent a letter to the third man saying that “I can’t live without you in my life.”

Nieves testified that she didn’t remember sending the letters and “thought she dreamed about holding a lighter and seeing flames” until she realized she had scorched hair on the back of her hand.

Defense experts testified that she had taken a combination of drugs that could cause her to act while she was “basically unconscious,” said one, or in delirium, said another. Prosecution witnesses disputed those conclusions.

“Absent the trial judge’s persistent, disparaging remarks, a juror might have viewed these circumstances with greater sympathy and concluded the crime was a tragedy lacking the moral culpability to warrant death,” Cantil-Sakauye wrote.

“A juror might also have given greater weight to defendant’s remorse and evidence she had been a loving mother to conclude that life in prison, confronted each day with what she had done to her children, was a fitting punishment.”

The justices rejected multiple other defense claims of trial error, including that the jury was not properly selected or screened to consider a death penalty case involving the four young children.

The Los Angeles County District Attorney’s Office did not respond to a request for comment.