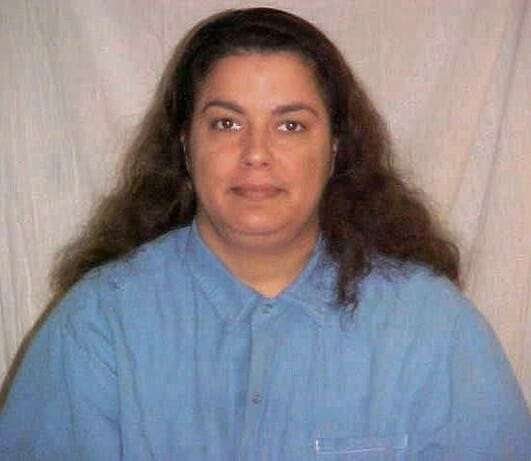 Angelina Rodriguez is sitting on death row in California for the murder of her husband. According to court documents Angelina Rodriguez married the victim and within months she realized that it was a mistake. Rodriguez would take out a quarter of a million dollar life insurance and plotted on ways to kill him. Angelina tried a number of methods including poison but finally she killed him by adding antifreeze to his gatoraid. Rodriguez at first got away with it but because the death was ruled unconclusive she could not collect the life insurance so she pushed for more tests and in the end they figured out the truth and she was arrested, convicted and sentenced to death for the murder of her husband Frank Rodriguez.

Angelina Rodriguez met her husband Frank, a special education teacher, while working at a camp in San Luis Obispo, California. The couple married in April 2000. It was Angelina’s fourth marriage.[1] Prosecutors argue that within months of the marriage, Rodriguez took out a $250,000 life insurance policy on Frank and began plotting to kill him. She was suspected of poisoning Frank’s tea with oleander leaves, loosening the gas cap on their clothes dryer, and finally adulterating her husband’s Gatorade with antifreeze. Frank Rodriguez died on September 9, 2000. His death was initially ruled undetermined, but the lack of a cause of death meant that Angelina Rodriguez could not get a death certificate or Frank’s life insurance. She pushed for more testing, and those results showed that he had been intentionally poisoned. Angelina was arrested for murder in Paso Robles, California in February 2001

The California Supreme Court upheld the death sentence for a former Montebello woman who killed her husband in 2000 by putting anti-freeze in his Gatorade in order to collect his $250,000 life insurance policy.

The high court ruled Thursday that Angelina Rodriguez received a fair trial in 2004. It said if any errors occurred during her trial, they were harmless.

Rodriguez was sentenced to death on Jan. 12, 2004 for poisoning her fourth husband, 41-year-old Jose Francisco “Frank’ Rodriguez, by giving him drinks with oleander and anti-freeze. According to court documents. Rodriguez wanted to collect on a life insurance she had insisted they take out nearly two months before he died. She was the primary beneficiary.

A jury convicted her of first degree murder with the special circumstances of murder by administering poison and murder for financial gain. She was also found guilty of attempting to dissuade a witness.

But jurors deadlocked on a charge of attempting to have the same witness killed by a fellow inmate who was released from custody before the trial began.

Detectives said Rodriguez used oleander extract to sicken her husband, then finished him off with antifreeze while supposedly nursing him back to health.

On Sept. 9, 2000, Montebello police responded to a call at the couple’s home in the 800 block of Marconi Street in Montebello and found Frank Rodriguez lying facedown on a carpet in a bedroom. The officer testified that Rodriguez’s crying “seemed rehearsed or kind of forced.”

Telephone records showed Rodriguez called the insurance company just hours after her husband’s body was removed from the home.

She had tried to kill him before by loosening the connection on a gas dryer in the garage, according to court documents. But Frank Rodriguez smelled the gas and called a repairman.

The couple met in February 2000 while both were working for Angel Gate Academy in San Luis Obispo. They got married in April. Frank Rodriguez later landed a teaching job at Los Angeles Unified and the couple moved to Montebello.

Rodriguez told a friend how unhappy she was with her husband. When the friend asked why doesn’t Rodriguez divorce this husband like her other husbands, she was told Frank Rodriguez has a life insurance policy.

The friend and her mother also told Rodriguez a story about a woman who had tried to kill her husband by giving him “oleander tea.”

Prosecutors believe Rodriguez used oleander leaves from a neighbor’s shrub to sicken her husband, but the poison did not kill him. She later heard about antifreeze.

The same friend and her boyfriend mentioned a dog who bit the friend’s son. The boyfriend at one point said they could just soak some hotdogs in antifreeze and throw it over the fence.

When Rodriguez asked why, she was told about the toxic effects of antifreeze and that veterinarians warn people to keep it away from pets because it has a sweet taste.

Investigators said Rodriguez pressured the friend not to testify about their discussions of antifreeze as a poison.

At the penalty phase of her trial, the prosecution presented evidence that Rodriguez killed her 13-month-old daughter in Sept. 18, 1993 in Lompoc.

Alicia Nicole Fuller’s death had been blamed on a defective pacifier when the nipple part of the pacifier was found in her throat.

The prosecution said Rodriguez won more than $200,000 in a settlement after she sued the maker of the pacifier. According to court documents, she insured Alicia’s life for $50,000 two months before the child died. Rodriguez was the primary beneficiary. The insurance company paid her $50,000 plus interest.

Rodriguez wasn’t charged by Santa Barbara County authorities for the death of Alicia. She has also denied killing her daughter.

Twenty of the state’s 747 inmates on death row are women. Executions have been on hold in California since 2006 because of lawsuits challenging the constitutionality of California’s death penalty.