Alton Coleman was born in Illinois on November 6, 1955. Alton Coleman mother worked multiple jobs and Coleman was raised by his grandmother. During his middle school years he would drop out and would be arrested six times for sex related crimes between 1973 and 1983. Ultimately two of the cases would be dropped. Two of the cases he was acquitted. Alton was scheduled to go on trial in Illinois for the sexual assault of a fourteen year old girl when the multi state crime spree began

Debra Brown was born in Illinois on November 11, 1962. She has a borderline intellect and suffered a severe head injury as a child. At the time she met Alton Coleman in 1983 she was engaged to another man however she would leave him to go with Alton. Debra Brown before the crime spree had no criminal record.

The multi state crime spree began in Wisconsin. Alton Coleman had befriended a single mother and soon after her nine year old daughter, Vernita Wheat, went missing on May 29, 1984. A few weeks later the little girls body would be found she had been sexually assaulted, tortured and strangled with a ligature.

Soon after in Gary Indiana Alton Coleman and Debra Brown would abduct two little girls, nine year old Annie and her seven year old niece Tamika Turks, who would be sexually assaulted. Annie would survive the brutal assault however seven year old Tamika would not.

Donna Williams was reported missing the same time as the little girls were abducted. Her body would be found in a river in Detroit Michigan a month later. The woman had been sexually assaulted and strangled with a ligature.

In Michigan Alton Coleman and Debra Brown would break into the home of an elderly couple who were badly beaten and robbed.

In early July 1984 a woman in Ohio family became concerned as she stopped communicating with them. When the family went to her home they would find her body along with her nine year old son hidden in a crawlspace of the home. Both had been strangled with ligatures.

Later that same day Alton Coleman and Debra Brown would force their way into the home of a couple who were brutally beaten and robbed. Oddly Alton and Debra would stay at a local Revered home and attended church services.

The next week Alton and Debra would abduct a fifteen year old girl, Tonnie Storey, whose body would be found eight days later. Police would discover an item stolen earlier in the crime spree under the teenagers body which would lead the FBI to place Alton Coleman on their Top Ten Most Wanted List

A day after the abduction of Tonnie Storey Alton Coleman and Debra Brown would break into another home where the woman was sexually assaulted and beaten to death. The woman’s husband would survive a brutal beating and would contact police. The man would tell police that Alton and Debra came over regarding a camper for sale and soon after the attack began

The vehicle stolen from the couple was found in Kentucky days later where Alton Coleman and Debra Brown kidnapped a college professor and stole his car plus drove back to Ohio with him locked in the trunk. The college professor was later rescued.

Alton Coleman and Debra Brown would head back to Illinois. Along the way way they would steal yet another vehicle and kill its owner.

Soon after arriving in Illinois Alton Coleman and Debra Brown would be arrested.

Due to the fact that the crimes committed by Alton Coleman and Debra Brown covered such a large area it took awhile to plan out the course of action in terms of prosecution. Michigan was ruled out pretty quickly as it did not have the death penalty.

Debra Brown borderline mental intellect has kept her from being executed and Ohio and Indiana no longer include her on their list of death row inmates. As of 2020 Debra Brown is in prison in Ohio 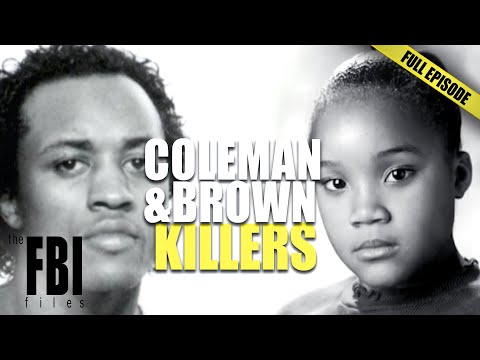 n the words of prosecutors here, Alton Coleman is a “poster child” for capital punishment, a cold-blooded killer whose murder spree in the summer of 1984 terrorized the Midwest, leaving eight people slain and Coleman with death sentences in three states.

But to his defenders, Coleman is exactly the kind of killer who should be spared: a man whose mother left him in a garbage can as an infant and whose grandmother subjected him to physical and sexual abuse–a history that coupled with brain damage prompted one doctor to describe Coleman’s mind as a “damaged container with damaged contents.”

Sitting in one of the low-slung buildings that house Death Row here, his hands and legs shackled with steel chains, Coleman looks back on both sides of his life and views it as something of a waste. His gaze is firm, his words are measured.

“I think I was doomed,” Coleman, now 46, said in an interview at Mansfield Correctional Institution. “Perhaps I should have died at birth.”

Instead, Coleman is scheduled to be executed by lethal injection Friday morning. On Wednesday, Gov. Bob Taft denied clemency, saying no court has questioned Coleman’s responsibility for the slaying of the suburban Cincinnati woman–the case leading to Friday’s execution.

But as the execution nears, nagging questions about Coleman’s cases are unresolved, especially in Ohio, suggesting that even death penalty cases where guilt and innocence are clear–and where the crimes are truly horrible–can leave troubling legacies.

Last year, a panel of judges from the federal appeals court in Cincinnati reversed the death sentence in one of Coleman’s cases in Ohio–the murder of teenager Tonnie Storey–because his defense attorneys did no investigation of his upbringing.

That investigation, the appeals court said, would have uncovered a background so horrific that there was a strong likelihood that at least one juror would have been swayed to spare Coleman from a death sentence.

But in his other case–the murder of 44-year-old Marlene Walters, for which he is being executed, and the attempted murder of her husband, Harry–a different panel of judges from the same federal appeals court let the sentence stand, though the attorneys in that case also did no investigation of Coleman’s childhood.

“Two different panels coming to contrary conclusions–that has to be resolved one way or the other,” said Dale Baich, a federal public defender in Arizona who has represented Coleman for more than a decade. “It comes down to basic fairness.”

`I wasn’t used to normal’

By virtually all accounts, Coleman’s upbringing was terrible. He never knew his father, and his mother–a drug user and prostitute who was institutionalized several times–abandoned Coleman in a trash can as an infant, court records show.

He was rescued by his grandmother, but under her care he was often neglected and subjected to physical and sexual abuse while living in Waukegan’s depressed and crime-ridden Market Street section of town, court records show. She practiced voodoo and often enlisted Coleman’s help, having him collect dirt from cemeteries and kill small animals for her potions, records show.

“I wasn’t used to normal,” Coleman said. “I didn’t know what normal was.”

Coleman also suffered brain damage–believed to be linked to his mother’s drug and alcohol abuse during pregnancy and his childhood head injuries–making it difficult for him to make rational decisions, a condition worsened by his own drug abuse. Thomas Thompson, a New Mexico neuropsychologist hired by Coleman’s attorneys, described Coleman’s brain as a “damaged container with damaged contents.”

In a plea for mercy, Coleman also pointed to prison records that show he has been a model inmate, with no violations in 17 years. Two guards offered sworn affidavits of Coleman’s good behavior behind bars–a prison record that the prosecutors ridiculed as meaningless.

Coleman’s explanation for his murder spree is simple–drugs.

“All I know, I had to get narcotics to keep going,” Coleman said. “My main goal was to use drugs. I had no other destination whatsoever.”

Coleman’s case also has been dogged by charges that Cincinnati prosecutors improperly rejected nine of 12 blacks from the jury pool. The issue has not been addressed by appeals courts because Coleman’s original appeals lawyers did not raise it, and so it was forfeited for future appeals.

Those issues are set against one of the nation’s worst crime sprees, which Coleman undertook with a girlfriend, Debra Brown. She faces a death sentence in Indiana, and long prison terms in Ohio and Illinois.

“If there is ever a case that cries out for justice, it is this case,” said Ohio’s Hamilton County prosecuting attorney, Mike Allen. “This case cries out for Alton Coleman to pay the ultimate penalty for crimes he committed.”

Said Harry Walters, who was permanently disabled by Coleman’s attack: “It’s time to do it. I sincerely mean it. Execution is the solution.”

The spree began in May 1984 in Kenosha, where Coleman, using the name Robert Knight, befriended Juanita Wheat and earned her trust. Coleman then kidnapped and murdered her 9-year-old daughter, Vernita. Vernita’s body, strangled and bound with wire, was found in an abandoned building in Waukegan.

At the time, he had already served time for rape and deviate sexual assault, had been arrested on other occasions for sex charges, and was facing a current rape charge, records show.

“I want to see something happen to him. I want to see it happen and feel it all,” said Juanita Wheat, now 55 and a nurse’s assistant in Kenosha who plans to travel to Ohio to witness Coleman’s execution.

“Justice is for all,” she added, “and you get what you deserve.”

As police pursued Coleman, he and Brown traveled the Midwest, stealing cars to get from Illinois to Indiana and through Michigan, Ohio and Kentucky, leaving dead bodies almost everywhere they stopped.

In Gary, he was convicted of killing Tamika Turks, 7, and in Detroit, Toledo and Indianapolis, he and Brown are believed to have murdered others, though Coleman was not prosecuted.

In Norwood, a working-class suburb of Cincinnati, Coleman and Brown stopped at the Walterses’ home to try to buy a camper that the Ohio couple were selling. Inside, they beat both, tied them up and left them for dead. Marlene Walters suffered some two dozen wounds to her head. Coleman and Brown were arrested a week later as they sat in the bleachers at an Evanston park.

“His alleged tough childhood does not excuse him from suffering the ultimate punishment,” said Allen, the Ohio prosecutor. “Alton Coleman is pure evil.”

Days before his execution, Coleman, bowed his head, said that he was remorseful and that he was preparing himself to die.

“I take responsibility for what I did,” he said. “I’ve messed up terribly in this life.”