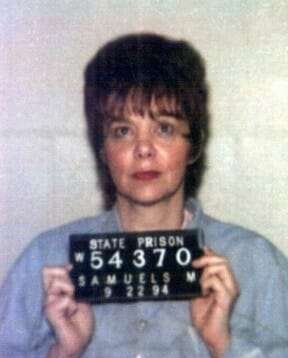 This is a weird case. Mary Samuels is currently on California death row for the murder of her husband and the man she hired to kill him. According to court documents Samuels wanted to collect on her husband’s life insurance policy so she hired someone to kill him. Then Samuels was worried the hitman would connect her to the crime so she hired someone else to kill him. Then Samuels collected on the life insurance and managed to go through the majority of it before she was arrested for murder. Mary Samuels would be convicted and sentenced to death

Defendant was married to Robert Samuels. On October 31, 1986,

Mary Samuels filed for divorce. Even after the divorce proceedings were initiated,

Mary Samuels and Robert Samuels were cordial, and defendant continued to work in

the Subway restaurant she and Robert Samuels owned. However, by November

1988, just before his murder, Robert Samuels was depressed and had a less than

On October 31, 1988—approximately two months before he was killed—

Robert Samuels went to his divorce attorney, Elizabeth Kaufman, and signed a

at running the business. He also wanted to reduce spousal support payments

below the $1,200 per month level because he was no longer able to pay that

amount. The modification was never filed because Kaufman was waiting for

Robert Samuels to complete a portion of the paperwork.

1. The Solicitation and Murder of Robert Samuels

Anne Hambly, defendant’s friend, testified defendant told her that after

several attempts to find someone to kill Robert Samuels had failed, defendant was

able to get James Bernstein to agree to commit the murder. Bernstein was dating

defendant told him that Robert Samuels had abused Nicole. A month before

permanently” because he was a child molester and batterer. He asked his

employer, Charles Mandel, if he knew anyone who could “take care of it.”

Mandel provided Bernstein with the phone number of Mike Silva. Also, during

November and December 1988, Bernstein asked a friend who owned a gun shop if

he could get some weapons.

was dead and that she planned to “discover” his body in two days. On

On December 9, 1988, the Los Angeles Fire Department responded to a call

close range. Samuels also suffered a blunt force trauma to his head that was a

contributing factor to his death.

Mary Samuels and Nicole Samuels were present when the police arrived.

the house. Defendant told the police she discovered Robert Samuels’s body while

dropping off the family’s dog. Defendant sought to bolster this story by leaving

night he was found dead. Referring to the murder of Robert Samuels, defendant

had given Bernstein money six months earlier to arrange the killing. Mary Samuels

had “bugged” her car, purse, and home.

on several insurance policies after Robert Samuels’s death. The total amount of

these policies was in excess of $240,000. In addition, the prosecution introduced

Additional evidence introduced by the prosecution showing how defendant

by Robert Samuels; (2) she received approximately $6,000 in uncashed payroll

checks of Robert Samuels; and (3) she refinanced the family home after Robert

Mary Samuels began to live a lavish lifestyle after Robert Samuels died. In

addition, defendant made several incriminating statements after his death. For

example, when asked by Anne Hambly who Mike Silva was, defendant told

told a friend, Marsha Hutchinson, that if she were not careful in her divorce

proceedings, then Hutchinson’s husband might decide to put a hit on her.

sister-in-law to believe that defendant had Robert Samuels killed.

death. He told his employer, Charles Mandel, that Robert Samuels’s murder had

part in the crime.

2. The Solicitation and Murder of James Bernstein

On June 27, 1989, James Bernstein was killed. The circumstances leading

to his murder are as follows: David Navarro and James Bernstein met in February

1989. Navarro testified he met Bernstein through Nicole Samuels, who was a

Navarro and Bernstein became friends and they sold drugs together until

Bernstein disappeared in June 1989. Bernstein and Navarro were together when

Bernstein received a page, called the number he had been sent, and then went to

also provided the names of Mary Samuels and Bernstein to the police. Los Angeles

Bernstein’s apartment on May 16, 1989, in connection with the murder of Robert

In late May or early June 1989, Bernstein told a friend, Rennie Goldberg,

he was feeling remorseful and frightened of being caught. He wanted to confess

his involvement in Robert Samuels’s murder. By June 1989, Bernstein had

become so afraid that he wanted to move out of the area. By the end of June 1989,

Bernstein was ready to go to the police and admit what he knew. He told Navarro

them for it. He repeatedly said that Mary Samuels had solicited him to murder Robert

insurance money, and that one person had been paid but did not do the job so she

After Robert Samuels’s murder, defendant told Anne Hambly that she

disclose her involvement in the murder. In March or April of 1989, Anne Hambly

Hambly believed Gaul could help Mary Samuels with her trouble with Bernstein.

Defendant and Gaul had several conversations about Robert Samuels’s death. In

involvement in the murder. In the second conversation, defendant repeated the

killed because he had abused Nicole and she wanted insurance money. During a

Mary Samuels also said that she had paid for Robert Samuels’s murder, but that the

Even in their first conversation, Gaul came to believe that defendant wanted

his help in killing Bernstein. Gaul testified that it was not until a later

conversation that Mary Samuels expressly asked Gaul for help. She told Gaul that she

wanted Bernstein killed because he was blackmailing her. She also told Gaul that

Bernstein was selling drugs to children.1 Defendant told Gaul that she would pay

for Bernstein to be killed. Mary Samuels spoke with Gaul five to 10 times about

Prior to Bernstein’s murder, defendant called Gaul. She told Gaul that she

was taking a trip to Cancun and wanted Bernstein murdered before she returned.

Mary Samuels agreed to pay Gaul $5,000 for killing Bernstein. Another form of

payment was that defendant would forgive a loan made to Anne Hambly. To

had been angered by it.

In June 1989, at defendant’s request, Bernstein moved in with Anne

Hambly and Paul Gaul. When he moved out of his apartment, Bernstein told his

apartment manager that he was moving out of town to avoid the police. Bernstein

Bernstein. On that morning, Gaul met Edwards at a bar and they started drinking.

some drug dealers in Frazier Park and that Gaul, Edwards, and Bernstein would go

The two men separated, planning to meet at Anne Hambly’s later that day.

and Bernstein talked about going to rip off drug dealers. Although he did not

initially agree to the plan, Bernstein was curious and wanted more information.

car. Gaul was the driver. After approximately 40 minutes, they ended up on an

isolated dirt road. However, it turned out to be a private driveway and several

dogs came running at the car. Edwards told Gaul to immediately get out of the

driveway, so Gaul placed the car in reverse and drove away. About five to 10

minutes later, Edwards yelled “Now” or something similar. Gaul slammed on the

car’s brakes, put the car in park, and turned off the headlights. Edwards grabbed

Bernstein’s neck from behind and began to choke him. Bernstein began to

scream, but Gaul twice hit him in the side of the head or neck to keep him quiet.

Bernstein opened the car door and jumped out. Edwards and Gaul got out of the

car and chased after Bernstein. Edwards caught Bernstein and wrestled him to the

“Why?,” and Gaul said that it was because he talked too much. Gaul stopped

holding Bernstein’s legs and joined in with Edwards. Bernstein struggled for three

to five minutes, then stopped. Gaul put his ear to Bernstein’s chest to listen for a

heartbeat, but did not hear one. An autopsy on Bernstein confirmed that he had

been strangled to death.

Gaul and Edwards placed Bernstein’s body in the backseat of the car.

Edwards drove to a dark and isolated area. During the drive to this area, Gaul took

off Bernstein’s belt, which had the name “James” on it, and threw it over a cliff.

When Edwards stopped the car, he and Gaul pulled Bernstein’s body out of

the backseat and put it over an embankment. Gaul and Edwards then drove back

Hambly discussed what had happened. Gaul and Edwards told Hambly that they

Anne Hambly made a phone call to defendant, who was in Cancun,

Mexico, at the time, and let her know that Bernstein was dead. Hambly did so by

using a “code” that she and defendant had agreed to. The code involved Hambly’s

calling Mary Samuels to say that Hambly had spoken to her sister. This statement was