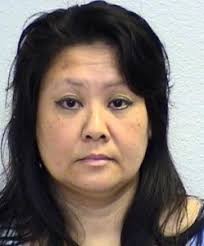 SANTA ANA – A North Carolina woman sat motionless in court Tuesday as she was convicted of murdering a Westminster fortune teller and her daughter in April 2005 after she received a fortune that did not come true.

The seven-woman, five-man jury deliberated for about a day before finding Tanya Jaime Nelson, 45, guilty of two counts of first-degree murder for the stabbing deaths of Ha “Jade” Smith, 52, and Anita Vo, 23, plus several “special circumstances” that could lead to a death sentence.

Superior Court Judge Frank F. Fasel scheduled a penalty hearing to begin Tuesday. If the same jury recommends that Tanya Jaime Nelson be executed for the double murders, she would become only the second woman to get the death penalty in Orange County history.

Smith’s sisters, Nicky Phan, of Vancouver, Canada, and Huong Kempf, of St. Louis. Missouri, watched the verdicts in the courtroom gallery with tears brimming in their eyes. Later, they wept as they hugged Deputy District Attorney Sonia Balleste.

Co-defendant Phillipe Zamora, 55, also of North Carolina, pleaded guilty last year to two counts of first-degree murder and agreed to cooperate with authorities in the prosecution of Tanya Jaime Nelson. He will be sentenced to 50 years to life in prison later in the year.

He testified for two days through a Vietnamese interpreter and told the jury that he joined Nelson on the murderous mission after Tanya Jaime Nelson promised to introduce him to potential gay sex partners in Orange County.

Zamora said he was present in Smith’s home on April 21, 2005, when Nelson began stabbing Anita Vo, prompting Smith to scream. He testified that he panicked when Tanya Jaime Nelson yelled at him, “Kill her! Kill her! Don’t let her scream!”

He said he picked up a wine bottle and hit Smith in the shoulder to silence her before he wrestled her to the ground and stabbed her repeatedly with two knives.

“It happened so quickly,” Zamora told the jury. “I didn’t know what to do … I didn’t want her to scream.”

Zamora also testified that Nelson told him on the return flight to North Carolina that Smith was targeted for death because she gave Tanya Jaime Nelson a fortune that did not come true.

Tanya Jaime Nelson felt cheated because Smith predicted for Nelson that her business would do well if she relocated from Orange County to North Carolina, Zamora said, but instead Nelson ended up her losing her house.

Smith “did the fortune-telling for her and it was not accurate,” Zamora testified, and therefore Tanya Jaime Nelson felt that Smith “deserved to die.”

Anita Vo, 23 was stabbed to death with her mother, Zamora added, because Tanya Jaime Nelson felt she had also “deceived her, cheated her, like her mom.”

Defense attorney Ken Reed argued that Zamora made up that story to implicate Nelson and escape a death penalty prosecution.

Reed argued that Zamora was the sole killer, and that his client was not present when the two victims were slashed to death.

Tanya Jaime Nelson faces the death penalty hearing next week because her jury convicted her of the special circumstances of committing multiple murders, murders during the commission of robbery, and murder by lying in wait.