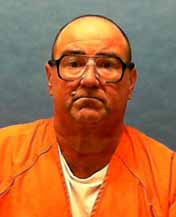 James Ford and Greg Malnory were
co-workers at the South Florida Sod Farm in rural Charlotte County.
Ford made plans to go fishing on the sod farm with Greg and his wife Kim
on 04/06/97.
On 04/07/97, the bodies of Greg
and Kim Malnory were found in a field near a pond at the sod farm.  The
22-month-old daughter of the Malnorys was found alive, but exposed to
the elements, in the Malnory’s truck.
The medical examiner testified
that Greg Malnory had been shot in the back of the head with a bullet
from a .22 caliber rifle, bludgeoned at least seven times with an axe,
and then had his throat slit.  Kim Malnory was raped, then bludgeoned
with an axe nine times in the head by Ford, who then put the barrel of
the .22 caliber rifle in her mouth and pulled the trigger.
Ford was linked to the crimes by
being seen on the same day of the murder with blood on his face, hands,
and clothes.  Also, a significant amount of DNA evidence, mostly from
the sexual offenses, was found at the crime scene and matched Ford’s
DNA.  Additionally, the .22 caliber rifle used in the murders belonged
to Ford.