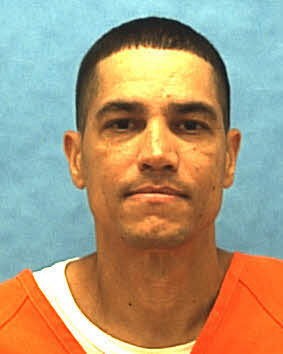 On July 2, 2001, 71-year-old Howard Wetherell was alone in his
Daytona Beach condominium when he encountered Richard England and his
companion, Michael Jackson. Jackson had been living with Wetherell,
trading sex for money and a place to stay.
In Wetherell’s upstairs
bedroom, England used a fire poker to repeatedly beat Wetherell who
later died of a cervical spine fracture resulting in suffocation due to a
paralyzed diaphragm.

This same night, England and Jackson stole Wetherell’s antique
guns, jewelry, silver and Wetherell’s green Mercury Sable car. The two
fled to Orlando, Florida, employing Reynaldo DeLeon, a friend of
England’s, to fence the stolen items.
Several days after the
murder, Jackson was arrested after wrecking the stolen car in Walton
County and soon implicated England in the murder. England, taken into
custody on an unrelated violation of probation charge, was later charged
with Wetherell’s murder.
At the trial, witnesses testified that
England claimed Wetherell was a pervert who deserved to be killed for
having sexual relations with a young man. England also made inculpatory
statements to DeLeon claiming responsibility for the murder.
DNA
on cigarette butts linked the two offenders to the scene, but
investigations were stalled due to a white powdery substance that,
according to crime scene investigators, had been sprayed to destroy
evidence that may have been left.
Handwriting analysis also linked
England to a photograph recovered from the crime scene with the words
“Pervert, f—k with us” with an arrow pointing to the victi