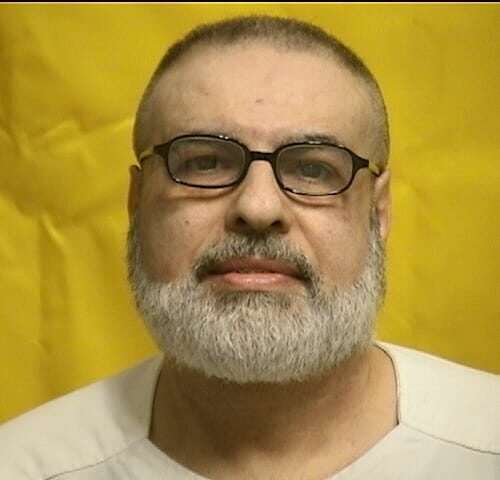 On January 7, 1992 ․ Abdul Hamin Awkal, shot and killed his estranged wife, Latife Awkal, and his brother-in-law, Mahmoud AbdulAziz, at the Family Conciliation Services Department of the Cuyahoga Domestic Relations Court. [Awkal] was captured in the courthouse basement not far from where the shooting took place.

Awkal arrived in the United States from Lebanon about 1984, when he was twenty-four. He lived with family members in Detroit, Michigan, and worked as a dishwasher and gas station attendant. In 1985, Awkal suffered a mental breakdown at the gas station after he believed he had been accused of theft by his employer. He became hysterical, cursing and breaking things, vomited and then collapsed. He was taken to Detroit Medical Center in a straitjacket. Awkal was apparently released into his brother’s custody later that same day, but disregarded instructions to follow up with a psychiatrist.

Later, Awkal began working at a General Motors factory in Michigan. He was eventually transferred to the Chevrolet plant in Parma, Ohio. He had difficulty sleeping during this period, and was prescribed medication to help him sleep.

Awkal’s family arranged for him to meet his wife, Latife, after his arrival in Cleveland. This type of arranged marriage was common in his Islamic faith. Awkal’s need for sleeping pills diminished after he met his wife. Awkal and Latife were married under Islamic law in March 1989 and under Ohio law in April 1989. Later in 1989, Awkal went to Cleveland Metropolitan General Hospital complaining of numbness down his side. Although Awkal was again told to talk to a psychiatrist, he never did so. Awkal and Latife had a daughter, Zaynab, born in September 1990.

On their honeymoon, Latife told Awkal she did not love him, but that she understood that love would follow. He unsuccessfully attempted to improve their relationship by opening a bank account for her, teaching her to drive, encouraging her to attend school, and helping her parents with various household tasks.

Latife and her brothers felt that Awkal was not a good Muslim. Awkal did not spend sufficient time in daily prayer and he enjoyed music and celebrating Christian holidays, such as Christmas. Latife and her brothers did not listen to music, or celebrate Christian holidays, and prayed five or six times a day. Latife’s brother, Mahmoud Abdul-Aziz, tried to teach Awkal the tenets of their family’s Islamic faith, but Awkal viewed Mahmoud’s actions as interference with his freedom, and believed that he was harassed and threatened by Mahmoud because of his religious beliefs.

Awkal’s marital life was dissolving. Latife spent many nights away from Awkal and eventually asked for an Islamic divorce. According to Awkal, a Muslim husband may divorce his wife merely by telling her, “I divorce you, I divorce you, I divorce you.” Awkal granted her request on October 13, 1991, but then Latife agreed to remarry him under Islamic law. Latife felt that she had been shamed and that her baby had been made illegitimate by the divorce.

On October 16, 1991, Latife found out that she had contracted a venereal disease from Awkal. The next day, Latife moved out of the marital home, moved in with Mahmoud, and started divorce proceedings. A divorce complaint and motions for spousal support, child support, visitation and restraining orders were filed in October 1991. Latife talked of returning to Lebanon with the baby.

Awkal was hurt by his family problems and sought counseling, but declined medication. Awkal had counseling sessions four times in November 1991, because he was depressed and suicidal. These feelings were brought on by the divorce and Awkal’s belief that Latife’s brothers and their religion had interfered with his life and his marriage. Awkal’s psychological records reflect that he was very angry with Latife and her brothers because of the divorce.

On November 8, 1991, Awkal bought a nine-millimeter semi-automatic pistol, allegedly to defend himself from Latife’s brothers. The evening of that same day and the morning of the next, Awkal called Latife and her brother, Omar Abdul-Aziz, threatening to kill her and her entire family if the divorce was not dismissed. Latife reported the call to her divorce attorney, who sent a letter to Awkal’s attorney regarding the threats.

Awkal attended hearings in his divorce case on December 10, 17, and 19, 1991, without incident. During this period, Awkal and Latife agreed to a child visitation schedule and temporary child and spousal support. At Latife’s insistence, the visitation order prohibited Awkal from participating in any Christmas-related activities with the baby during his visitation. Awkal also agreed that the family checking accounts, containing approximately $4,800, which had been frozen by the domestic relations court, were to be equally divided between Latife and Awkal.

A meeting was scheduled for 2:00 p.m. on January 7, 1992, at the Family Conciliation Services Department, Room 52, located in the basement of the old Cleveland courthouse. Latife came early to the meeting with her brother, Mahmoud, and her baby. They waited in the hall outside for Awkal to arrive.

Awkal arrived at the courthouse parking garage at 1:48 p.m. from Michigan, where he had spent the weekend with relatives. On his person were copies of the baby’s medical records, which had been checked out from the treating HMO over a month earlier, and numerous childcare supplies, including diapers, baby food, and clothing. Prior to the meeting, Awkal wrote a check to his brother for nearly the entire contents of the frozen checking accounts, and changed his address at the post office to his brother’s house in Michigan.

Awkal confronted Mahmoud and Latife in the hallway at approximately 2:00 p.m. No harsh words or raised voices were heard from the hall before the shooting. However, “panicky” voices were heard immediately before the three entered Room 52. Awkal chased Latife and Mahmoud into the room, where he shot his wife and her brother at close range. Five shell casings were found inside the room; one shell casing was found in the hall outside the room.

Awkal then picked up the baby from the bench outside the room and walked quickly through the basement halls of the courthouse with her in his arms. Several armed deputies confronted Awkal in the hallway. Awkal pointed his gun at his head and then at his daughter’s head, threatening to kill her and then himself. Awkal vowed that nobody was going to take his baby.

When a deputy tried to grab Awkal’s gun, Awkal backed further down the hall with the baby. While proceeding down the hall, Awkal was confronted by another deputy, who attempted to disarm Awkal. Awkal evaded this attempt, but was shot in the back while trying to escape.

When Awkal was taken into custody, his pistol was cocked, ready to fire, and contained six live rounds (one in the chamber; five in the magazine). Awkal also had another magazine containing thirteen rounds of live ammunition in his coat pocket. The bullets retrieved from Mahmoud’s body and from Room 52 were fired from Awkal’s gun.

At the hospital the next day, Awkal, after being advised of his Miranda rights, told police that he had confronted Mahmoud in the hallway and demanded that Mahmoud “profess that Allah was the only God.” When Mahmoud did not do so, Awkal shot the victims. Awkal stated that he thought that he had shot himself.

While awaiting evaluation by a court-appointed psychiatrist to determine whether he was sane and competent to stand trial, Awkal reportedly had hallucinations involving his wife, who spoke to him and told him to join her. Two psychiatrists had examined Awkal at the county jail and found him to be depressed and angry. Awkal was prescribed anti-depressant and anti-anxiety drugs. These drugs did not stop him from having the hallucinations, and he was prescribed different anti-psychotic and antidepressant medications.

Abdul Awkal was found sane at the time of the murders in the preliminary sanity report. However, the severity of his depression rendered him incapable of aiding with his defense, and the trial court found Awkal not competent to stand trial. He was ordered to the Dayton Mental Health Center, Forensic Unit, for treatment and further evaluation. During his stay in Dayton, Awkal continued to receive anti-psychotic medication, but at greater levels. He was also placed on anti-depressant and anti-anxiety medications. On September 3, 1992, the trial court found Awkal competent to stand trial, but returned him to Dayton for further treatment until the trial started.

In October 1992, a jury was impaneled. During the trial, defense counsel complained to the court that Awkal’s condition had deteriorated and suggested that a new competency evaluation be undertaken. The trial court refused to have Awkal reevaluated, but stated that it would watch Awkal closely to see that he was paying attention to the trial and helping with his own defense. After the state closed its case in chief, the trial court dismissed one of the felonious assault charges.

Several witnesses testified on Awkal’s behalf during the guilt phase. Dr. Paul E. Hewitt, a psychologist, was called to give an opinion on the issue of prior calculation and design. However, when the court learned that Dr. Hewitt was not a licensed psychologist in Ohio, his testimony was stricken from the record. Dr. Magdi S. Rizk, the psychiatrist who conducted Awkal’s pretrial sanity and competency evaluations, testified that Awkal was sane at the time of the murders. Finally, Dr. Eileen S. McGee, a psychiatrist awaiting board certification, testified that Awkal was insane at the time of the shooting, that he did not know what he did was wrong, and that Latife and Mahmoud had provoked the incident.

Awkal testified on his own behalf. He stated that Mahmoud and Latife’s other brothers were religious fanatics, and had harassed him and interfered in his life. Awkal testified that he purchased the gun to protect himself from Latife’s brothers, who had threatened him and, on one occasion, forced him to kneel down before them, swearing allegiance to their religious sect. He denied threatening Latife or her brother.

Awkal stated that on the morning in question he met Latife in the hallway of the courthouse, and asked her to come back to him. She refused, and he went back to his car to get his gun, intending to kill himself in front of Latife to make her regret her decision to divorce him. When Awkal returned he asked Latife if he could hug his daughter one last time. Latife agreed, but Mahmoud confronted Awkal, stating that the baby was not Awkal’s, and that Awkal would never see her again. Awkal testified that Mahmoud’s face “turn[ed] into that of a monster” and that the walls then collapsed. The next thing Awkal knew, he awoke in the hospital.

On rebuttal, the prosecution presented Dr. Edward Dutton, a forensic psychiatrist, who testified that Awkal was malingering, that he understood what he had done was wrong, and that he had acted out of anger.

The jury found Abdul Awkal guilty as charged on the aggravated murder charges, but not guilty on the remaining felonious assault charge.