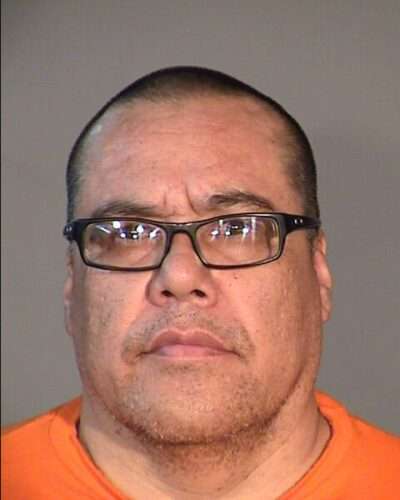 Court documents released in the arrest of convicted murderer Alan Champagne show how police believe Champagne’s responsible for two bodies in a homemade coffin in a backyard in Phoenix.

Champagne, 42, was arrested yesterday on first-degree murder charges, a day after landscapers unearthed human remains in a wooden box, buried at the former home of Champagne’s mother.

According to court documents obtained by New Times, the case started with an anonymous tip in October 2011, as someone reported that a guy named “Mico” murdered two people in a Phoenix apartment.

“Mico” was actually found to be Champagne, who lived in the apartment where this alleged killing occurred.

By the time police heard about it, there was a new tenant in the apartment — which is just a couple blocks from where the bodies would be unearthed, near Indian School and 16th Street — who said that the maintenance man had done a lot of work on the place.

The maintenance man told the new tenant that the apartment “smelled horrible,” so the drywall and tile had been replaced.

“[The maintenance man] commented that fluids appeared to have leaked from inside apartment #1 into the storage locker . . . ” court documents state. “The fluid was still visible and had a greasy appearance to it.”

The maintenance man also told police he helped Champagne build a wooden box, which, unbeknownst to him, would become a coffin for two people.

Champagne said his mother’s home was going into foreclosure — which was true — but said he needed the wooden box to move car parts, which was not true.

Later in the investigation, police found a report in which Champagne was pulled over while driving and arrested on a misdemeanor warrant.

Inside the car, cops found a Social Security card belonging to a guy named Philmon Tapaha, as well as a purse, which sure didn’t belong to Champagne.

In February of last year, police talked to Champagne’s baby-mama, who said her brother was probably upset with Champagne for cheating on her, but she didn’t have any information about an actual altercation.

Still, a couple of months later, Champagne became a suspect in an unrelated aggravated-assault case, and when police went to arrest him in March at his mother’s place — the same house where the bodies were dug up Wednesday — Champagne barricaded himself inside.

Champagne then started shooting at officers, police say, and he’s been in jail on attempted first-degree murder charges — and a variety of other charges — ever since.

Champagne was still a suspect in the murder case but never spoke to investigators about it. DNA evidence concluded that Philmon Tapaha was likely killed inside the apartment formerly occupied by Champagne.

Still, neither Tapaha’s nor his girlfriend’s body was ever found — until Tuesday.

Landscapers doing work for the new homeowner of the residence formerly owned by Champagne’s mom dug up the coffin with two “mummified” bodies.

The bodies are still with the medical examiner, but Champagne — who was released from prison in 2005 after serving 13 years for second-degree murder — was re-booked into jail on two first-degree murder charges