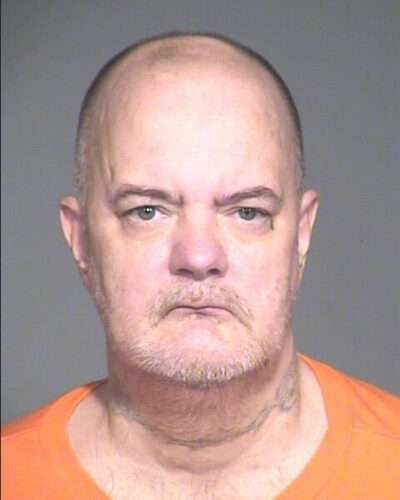 On the morning of February 26, 1999, police went to the home of Joseph and Lillian Boucher after their daughter, Vivian Brown, could not contact her parents.   When no one answered the door, police entered the home through the kitchen, where they noticed a telephone with its line cut and cord missing and a knife block with a missing knife.

¶ 3 Police discovered the body of Joseph Boucher on a bed in a bedroom.   He had defensive wounds and minor cuts and scrapes on his wrists and arms indicating he had been bound.   In another bedroom, police found Lillian Boucher’s body on the floor.   She had bruises on her face and body, consistent with an altercation, and a small amount of blood around her nose.   According to the medical examiner, Mr. Boucher had been asphyxiated by smothering.   Mrs. Boucher had been asphyxiated by smothering or a combination of smothering and strangulation.   Missing from the house were a .22 caliber handgun, a pellet gun, Mr. Boucher’s wedding ring and watch, and Mrs. Boucher’s diamond wedding ring, anniversary ring, watch, earrings, and crucifix.

¶ 4 On February 26, 1999, Brad Howe contacted police with information that he had obtained from Richard Finch about the murders.   Finch worked for Howe and his father as a “lot boy” at their auto dealership in Lake Havasu City and also lived at Howe’s house.   According to Howe, Finch was “simple” and, because he could not manage his own finances, Howe and his father gave Finch money only as he needed it.

¶ 5 Howe did not see Finch on the night of February 24;  however, they went drinking at several bars the next night.   Howe offered to pay as usual, but Finch surprised him by offering to buy drinks and displaying $250 to $300.   Howe told police that Finch was drinking heavily and acting as if something was on his mind.   Howe repeatedly asked Finch what was distracting him.   Finch became “very upset” and admitted he had been involved in “some bad things.”   The two then left the bar and, on the way home, Finch told Howe more details.

¶ 6 Once at home, Finch, upset and crying, retrieved a bag and showed Howe the contents.   Howe, not wanting the items in his house, took the bag and hid it in the desert in the early morning hours of February 26.   He later led police to the bag, which contained several items stolen from the Bouchers’ home.

¶ 7 The same day, police officers went to Howe’s house and arrested Finch, who had packed his belongings as if planning to leave.   After being advised of his Miranda rights, Finch agreed to speak with police.   In a taped interview, Finch confessed his involvement in the murders.   He also identified his companion as “Slinger,” a nickname used by Ellison.   Two days later, Finch helped police find the missing kitchen knife in a field behind the Bouchers’ house.

¶ 8 On March 1, 1999, after unsuccessfully searching for Ellison at the house of his girlfriend, Cathie Webster-Hauver, Kingman detectives Steven Auld and Lyman Watson learned that Ellison had been arrested in Lake Havasu.   After informing Ellison of his Miranda rights, the detectives interviewed him at the Lake Havasu police station just before 9:00 a.m. Ellison told the detectives he had met Finch two or three weeks earlier at Darby’s, a Lake Havasu bar.   The two men met again at Darby’s on February 24, 1999, where Ellison agreed to do “a job” with Finch in Kingman.   Ellison said that he intended only to commit a burglary, not to kill anyone.   Ellison also denied killing either victim.

¶ 9 That same night, Ellison and Finch drove Ellison’s van to Kingman, where they stopped at the Sundowner’s Bar. According to the bartender, Jeannette Avila, Ellison entered the bar first, ordered and paid for beers, talked to her at length, and led the way when the two men left the bar.   Finch, in contrast, never spoke to Avila;  he simply sat without removing his sunglasses.   Avila later identified Ellison in a photographic line-up, but was unable to identify Finch.

¶ 11 Ellison claimed that it was Finch’s idea to “hit” the house and that he did not know how Finch had picked the Bouchers’ home.   Ellison admitted he was somewhat familiar with the area because his parents lived nearby.   Additionally, at trial, Brown identified Ellison as having worked on her parents’ home in October 1997 and at a nearby house the next year.   According to Howe, Finch did not possess a gun or a vehicle and had never gone to Kingman before February 24, 1999.

¶ 12 The police acknowledged at trial that no physical evidence proved who actually killed either victim.   None of the approximately 170 fingerprints found in the house matched Ellison or Finch.   Police found a latex glove in the Bouchers’ yard.   Ellison later admitted he had supplied the latex gloves that he and Finch wore during the burglary and murders.   None of the Bouchers’ property was found on Ellison, in his van, or at his girlfriend’s home.   Ellison, however, was not arrested until five days after the murders.   Ellison admitted removing jewelry from Mrs. Boucher’s body, but said he did so only at Finch’s direction.   He also admitted using twenty dollars stolen from the Bouchers to buy gas for his van.

¶ 13 The detectives attempted to record their initial interview with Ellison but failed to do so.2  Detective Watson re-interviewed Ellison at 10:06 a.m. In this nine-minute recorded interview, Detective Watson tried to summarize the main points of the first interview.   This tape was played for the guilt proceeding jury.

¶ 14 On March 4, 1999, Ellison and Finch were indicted for the murders and first degree burglary.   The State sought the death penalty for each defendant.   Judge Robert R. Moon severed their trials.   In September 2000, a jury convicted Finch on the murder and burglary charges.   In March 2001, Judge Moon sentenced Finch to natural life imprisonment, finding, among other things, mitigating factors due to Finch’s having acted under duress from Ellison and later cooperating with police in the investigation.

¶ 15 Ellison was tried in January 2002.   With Judge Moon presiding, the jury convicted Ellison on the murder and burglary charges, specifically finding him guilty of both premeditated and felony murder of the Bouchers and that he had either killed, intended to kill, or acted with reckless indifference.