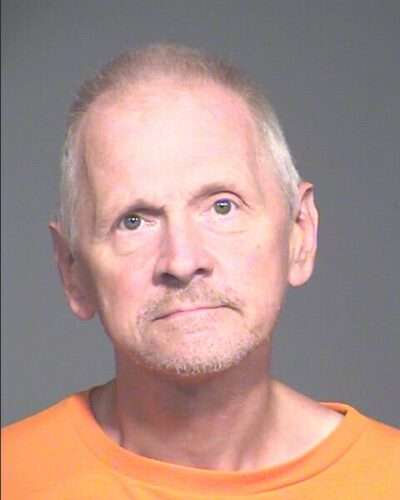 On September 24, 1994, Eugene Doerr called police. He reported waking up and finding a dead woman in his bedroom. The nude victim, Karen Bohl, was found lying on the floor with several lacerations to her head. A nipple had been cut off her breast. She suffered major trauma to her vagina and rectal area. Bruises and abrasions were found on her neck and other parts of her body. Investigators noticed signs of a major struggle inside the apartment, including bloodstains on walls, floors and furniture in different rooms. An autopsy later revealed Karen Bohl died from multiple blunt force trauma. Eugene Doerr’s clothes and most of his body were covered in dried blood. When his clothing was removed, investigators observed his pelvic area and penis were also saturated with dried blood. He had several injuries, including a broken hand, a deep laceration to his wrist consistent with a knife wound. A bloody steak knife was found on the bathroom sink. A bloodstained brass pipe was located on the living room floor. Eugene Doerr told police he had gone out drinking at a couple of bars the previous evening, and did not remember coming home. When he woke up, he found the victim’s body and realized he was covered with blood. He claimed he had no idea what happened. The defendant informed an investigator the victim’s purse was on the bathroom floor and her car was parked out front. He then tried to correct himself by saying he believed the car was hers. Doerr stated, “She must have really made me mad for me to do something to her like this. ” He asked an officer if he would be getting life in prison for the crime, then declined to answer questions without an attorney. Blood samples taken from Eugene Doerr showed no presence of drugs or alcohol.

At approximately 10:00 a.m. on September 24, 1994, two Phoenix police officers responded to a “check welfare” dispatch following a 911 call. Upon arriving at a bungalow-style apartment, they found the front door ajar and a disheveled Eugene Doerr sitting on the coffee table in the living room. He wore only shorts and was covered with blood.

When asked what had occurred, Doerr replied: “I don’t know. I woke up with this—with a dead body back there.” In a bedroom doorway, Officer Wirth found a naked woman lying in a pool of blood. Detecting no pulse, he instructed his partner to radio the fire department. Doerr responded, “[Y]ou don’t need fire because she’s dead.” He told the officers that he had awakened, gone to the bathroom, and found the body on the floor. He denied knowing the victim’s identity.

The four-room apartment showed signs of a violent struggle, with blood in every room. At trial, the medical examiner testified that the victim, 39-year-old Karen Bohl, died of multiple blunt force trauma. She suffered numerous injuries to the head, including a fractured nose, abrasions, cuts, bruises, and a two-inch laceration that exposed her skull. Her left hand was swollen and red. Her right hand was clenched in a fist holding hairs consistent with her own. Her left nipple and areola had been cut off, and above her right nipple were small lacerations. The body was covered in blood and fecal matter. Blood also formed a V-shaped pattern down her back from saturated hair.

The victim had been assaulted vaginally and rectally with an instrument of some kind. The doctor testified that the wall between her rectum and cervix had been destroyed. A bloody pipe, apparently part of a broken lampstand, and a bloody broom handle were found nearby—objects that the medical examiner said could have produced the injuries. Because of significant blood loss, swelling, and bruising, the doctor concluded that the injuries likely occurred prior to or during the victim’s death. There were twenty-six other areas of injury to her body. Her blood alcohol level tested at .25, but no other drugs were detected. Tests for semen were negative.

Defendant Doerr was also injured. His right hand was swollen, and he had minor cuts on his forearm, above his wrist, and on his left foot. His chest, stomach, pubic area, and hands were smeared and caked with blood.
. . . .

Defendant first claimed that he had no idea how the woman got there. Later, as officers waited for a search warrant, he told them that he thought her purse and ID were in the bathroom “because I remember seeing a purse and I don’t own a purse.” He also said the white car parked out front belonged to the victim. “That is her car she said . . . I think.” One of the officers testified that Doerr hesitated before adding the “I think.”

Doerr voluntarily went to the police station. During questioning, he asked one of the officers if he thought a judge would give him life for the murder. He also said, “[S]he must have really made me mad for me to do something to her like this.” The police did not test Doerr for drugs or alcohol until about 3:00 p.m., five hours after the 911 call. The tests were negative.