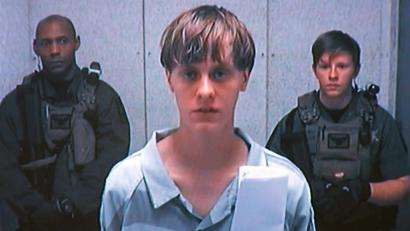 White supremacist mass murderer Dylann Roof staged a hunger strike this month while on federal death row, alleging in letters to The Associated Press that he’s been “targeted by staff,” “verbally harassed and abused without cause” and “treated disproportionately harsh.”

The 25-year-old Roof, who killed nine black church members during a Bible study in Charleston, South Carolina, in 2015, told the AP in a letter dated Feb. 13 that the staff at the federal prison in Terre Haute, Indiana, feel justified in their conduct “since I am hated by the general public.”

A person familiar with the matter said Roof had been on a hunger strike but was no longer on one, as of this week. The person couldn’t immediately provide specific details about the length of the hunger strike or whether medical staff needed to intervene. The person wasn’t authorized to discuss the matter publicly and spoke to the AP on condition of anonymity.

Roof wrote in his letter to the AP that he went on the hunger strike to protest the treatment he received from a Bureau of Prisons disciplinary hearing officer over earlier complaints that he was refused access to the law library and access to a copy machine to file legal papers.

Roof’s Feb. 13 letter indicated he was already “several days” into a hunger strike, and he wrote in a follow-up letter that the protest ended a day later after corrections officers forcibly tried to take his blood and insert an IV into his arm, causing him to briefly pass out

“I feel confident I could have gone much, much longer without food,” Roof wrote in the Feb. 16 follow-up letter. “It’s just not worth being murdered over.”

The allegations could not immediately be verified and a spokeswoman for the Bureau of Prisons said the agency had no comment on Roof’s allegations, citing privacy concerns.

Roof’s lawyers said in a statement that they were “working with BOP to resolve the issues addressed in the letters.”

Roof’s lawyers filed an appeal to his federal convictions and death sentence last month, arguing that he was mentally ill when he represented himself at his capital trial.

In a 321-page legal brief, Roof’s lawyers asked a federal appeals court in Richmond, Virginia, to review 20 issues, including errors they say were made by the judge and prosecutors that “tainted” his sentencing. One of their main arguments is that U.S. District Judge Richard Gergel should not have allowed Roof to represent himself during the penalty phase of his trial because he was a 22-year-old ninth-grade dropout “who believed his sentence didn’t matter because white nationalists would free him from prison after an impending race war.”

Roof is the first person to be ordered executed for a federal hate crime. Attorney General William Barr announced in July that the government would resume executions and scheduled five executions — though Roof is not included among that group — ending an informal moratorium on federal capital punishment as the issue receded from the public domain. The Supreme Court has temporarily halted the executions after some of the chosen inmates challenged the new execution procedures in court

A federal appeals court Wednesday upheld Dylann Roof’s conviction and death sentence for the 2015 racist slayings of nine members of a Black South Carolina congregation, saying the legal record cannot even capture the “full horror” of what he did.

A unanimous three-judge panel of the 4th U.S. Circuit Court of Appeals in Richmond rejected arguments that the young white man should have been ruled incompetent to stand trial in the shootings at Mother Emanuel AME Church in Charleston.

In 2017, Dylann Roof became the first person in the U.S. sentenced to death for a federal hate crime. Authorities have said Roof opened fire during the closing prayer of a Bible study at the church, raining down dozens of bullets on those assembled. He was 21 at the time.

In his appeal, Roof’s attorneys argued that he was wrongly allowed to represent himself during sentencing, a critical phase of his trial. Roof successfully prevented jurors from hearing evidence about his mental health, “under the delusion,” his attorneys argued, that “he would be rescued from prison by white-nationalists — but only, bizarrely, if he kept his mental-impairments out of the public record.”

Roof’s lawyers said his convictions and death sentence should be vacated or his case should be sent back to court for a “proper competency evaluation.”

The 4th Circuit found that the trial judge did not commit an error when he found Dylann Roof was competent to stand trial and issued a scathing rebuke of Roof’s crimes.

“Dylann Roof murdered African Americans at their church, during their Bible-study and worship. They had welcomed him. He slaughtered them. He did so with the express intent of terrorizing not just his immediate victims at the historically important Mother Emanuel Church, but as many similar people as would hear of the mass murder,” the panel wrote in its ruling.

“No cold record or careful parsing of statutes and precedents can capture the full horror of what Roof did. His crimes qualify him for the harshest penalty that a just society can impose,” the judges wrote.

One of Roof’s attorneys, Margaret Alice-Anne Farrand, a deputy federal public defender, declined to comment on the ruling. Roof’s other attorneys did not immediately respond to emailed requests seeking comment.

The Rev. Kylon Middleton, a close friend of Mother Emanuel Pastor Clementa Pinckney, a state senator who was killed in the massacre, said Roof’s appeal reopened some of the psychological wounds felt by loved ones of the victims and survivors.

Middleton said he is personally opposed to the death penalty but had accepted that as the sentence Roof received.

“We just want whatever the consequence or the justice that had been delivered based on the court’s ruling to be final, period,” Middleton said.

Assistant U.S. Attorney Nathan Williams, one of the lead prosecutors on the case, said the mass shooting was one of the worst events in South Carolina’s history.

“Our office is grateful for the decision of the court, a decision that ensures, as the Court stated, that ‘the harshest penalty a just society can impose’ is indeed imposed,” Williams said in a statement.

All of the judges in the 4th U.S. Circuit Court of Appeals, which covers South Carolina, recused themselves from hearing Roof’s appeal; one of their own, Judge Jay Richardson, prosecuted Roof’s case as an assistant U.S. Attorney. The panel that heard arguments in May and issued the ruling on Wednesday was comprised of judges from several other appellate circuits.

Following his federal trial, Dylann Roof was given nine consecutive life sentences after pleading guilty in 2017 to state murder charges, leaving him to await execution in a federal prison and sparing his victims and their families the burden of a second trial.

Last month, however, Attorney General Merrick Garland issued a moratorium and halted all federal executions while the Justice Department conducts a review of its execution policies and procedures. The review comes after a historic run of capital punishment at the end of the Trump administration, which carried out 13 executions in six months. A federal lawsuit has also been filed over the execution protocols — including the risk of pain and suffering associated with the use of pentobarbital, the drug used for lethal injection.

President Joe Biden as a candidate said he’d work to end federal executions. White House press secretary Jen Psaki said in March that he continues to have “grave concerns” about it.

Biden has connections to the case. As vice president, Biden attended the funeral for one of those slain, state Sen. Clementa Pinckney, who also pastored the congregation.

During his 2020 presidential campaign, Biden frequently referenced the shooting, saying that a visit to Mother Emanuel helped him heal in the aftermath of the death of his son, Beau.

Roof’s attorneys could ask the full 4th Circuit to reconsider the panel’s ruling. If unsuccessful in his direct appeal, Dylann Roof could file what’s known as a 2255 appeal, or a request that the trial court review the constitutionality of his conviction and sentence. He could also petition the U.S. Supreme Court or seek a presidential pardon.