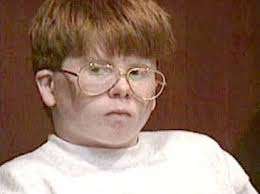 Eric Smith was thirteen years old when he murdered a four year old child. According to court documents Smith was tired of being bullied and decided to focus his anger on the four year old child who he lured to a forest area and struck the boy repeatedly with a rock. Smith would be found guilty of murder and sentenced to nine years to life in prison. This teen killer has been denied parole repeatedly since 2002

Smith, who was convicted of killing 4-year-old Derrick Robie in Steuben County in August 1993, went before the parole board last week. The state Department of Corrections and Community Supervision on Friday announced that the board again denied Smith’s parole.

Smith, now 38, is in the medium-security Collins Correctional Facility in Erie County, about 25 miles south of Buffalo where he is serving nine years to life in prison. He has been incarcerated for two dozen years.

Eric Smith was 13 when he lured Robie into a wooded area near the boy’s Savona home. Derrick was walking alone to a summer camp at a nearby park. Smith strangled Derrick, smashed his head with a rock and sodomized him with a stick.

During the April 10 interview with a parole board, Smith said he had, for years, held in a lot of anger due to years of being bullied, according to the parole documents.

“The panel is gravely concerned with the fact that you released your anger on an innocent, vulnerable 4-year-old boy who was cared for by his loving family,” wrote state parole board commissioner Carol Shapiro. “He was simply walking to his summer camp that he enjoyed and looked forward to playing kickball games.”

While Eric Smith has participated in “positive programming” while incarcerated, volunteers with the chaplain and has repeatedly apologized for his actions, “it does not outweigh the severity of your brutal crime,” Shapiro said.

Smith was housed in a juvenile facility until 2001, when he was transferred to state prison. His lawyer at the time of his trial tried to persuade a jury that Smith suffered from a mental disorder, but Smith was convicted of second-degree murder and sentenced to nine years to life in prison.