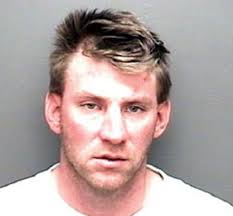 Lisa Lynch took longs breaks to fight back tears during her testimony Monday in a trial where her ex-boyfriend could be sentenced to death for the murder of her two children.

Jeffrey Weisheit, 37, is charged with setting fire to the Evansville home he shared with Lynch and her two children, Caleb Lynch, 5, and Alyssa Lynch, 8, in 2010 while the children were inside.

The case is being tried in Clark County because of the media attention it has received in Vanderburgh County where the alleged crime was committed.

Lynch, 30, testified that during a 6 p.m. to 6 a.m. work shift she had received a phone call after midnight from her neighbor that her home was on fire. She said Weisheit, who was watching the children, did not respond to her calls and text messages as she tried to find out if her children were safe.

The frantic mother was given ride from a co-worker to her burning home nearly 45 minutes away.

Lynch said from the witness stand that her neighbor had informed her that Weisheit’s Camaro was not at the home, and she went as far as contacting OnStar customer service to track down Weisheit in the vehicle. She said after several phone calls, an OnStar representative reached Weisheit, but her then-boyfriend declined to take the call from her.

At about 7:45 a.m. April 10, hours after Lynch reached the home, emergency response officials located Caleb Lynch’s remains in the burning rubble. It wasn’t until after 3 p.m. when Alyssa Lynch’s body was found huddled in what had been a closet.

Pictures of the children’s charred remains were shown to jurors Monday, after attorneys had presented their opening arguments earlier in the day.

After a week of jury selection, the trial continued Monday in Judge Daniel Moore’s Circuit Court No. 1.

Lynch testified that she became involved with Weisheit, a co-worker at a plastics plant, during her divorce with her children’s father, in 2008. She said they had a good relationship and had even talked about getting married and gone ring shopping, but the two were never officially engaged.

During Bretz’s testimony — who was German Township VFD’s assistant chief at the time of the 2010 house fire — he said that when Caleb Lynch’s remains were found, a road flare and a partial road flare were located in the immediate area.

When Bretz was cross-examined by the defense, however, he could not say how the fire was started or where in the home the blaze had originated.

During the trial’s afternoon break, McDaniel said he was pleased to have the long jury-selection process behind him and to be moving onto the arguments.

“It is good to get started, and I think it is going to move pretty quickly,” McDaniel said.

He said it remains unresolved if the fatal fire resulted from arson or another more benign cause.

McDaniel told the jurors earlier in the day to not let the emotional impact of the case sway their decision-making during the trial, adding that the photographs of the deceased children are some of the most unsettling images he has come across in his 45 years attending autopsies.

“When you are dealing with kids who have been burned, that’s as bad as it gets,” McDaniel said.

He said the defense plans to show that Weisheit did not set out to murder the Lynch children.

“I am hoping they will find that there was not an intentionally set fire,” he said. “I told the jury this morning: This is a fellow who should have been convicted of felonious neglect of children resulting in their death.”

The trial was scheduled to continue Tuesday morning.