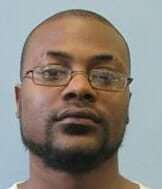 One of three people accused in the 2011 slayings of two employees at Krystal in Decatur was found guilty this morning on three counts of capital murder, according to the District Attorney’s Office.

Jordaan Stanley Creque, 23, was found guilty by a Morgan County jury for the shooting deaths of night manager Jeffrey Mark Graff, 49, of Huntsville, and Jesse Jose Aguilar, 23, of Decatur. Their bodies were discovered in the restaurant’s walk-in cooler.

Creque and two other defendants – Ezekiel Marquez Gholston, 22, and Cassandra Rayann Eldred, 24 – were each charged with three counts of capital murder, with the third stemming from the fact that they were accused of killing the men during commission of a robbery. Creque and Eldred worked at Krystal at the time.

Eldred and Gholston will be tried separately.

The jury began deliberating Thursday after six days of testimony, according to a report in The Decatur Daily. They resumed deliberations at 8:30 a.m. today and rendered a verdict before lunch.

Creque testified Wednesday he did not intend to kill Graff and that Gholston was the one who shot Aguilar, the Daily reported.