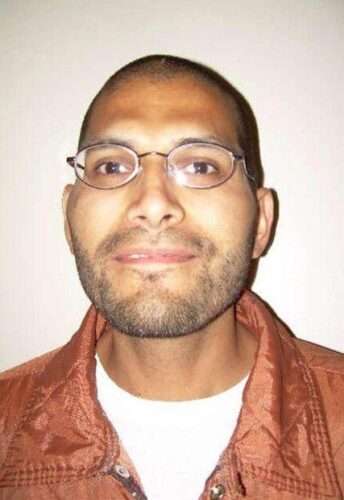 Jose Sandoval was sentenced to death by the State of Nebraska for the murders of five people. According to court documents Jose Sandoval, Jorge Galindo and Erick Vela entered a bank to rob it and before he was done five people were dead. Jose Sandoval would shoot and kill Lisa Bryant, 29, Lola Elwood, 43, Samuel Sun, 50, all Norfolk, Jo Mausbach, 42, Humphrey, and Evonne Tuttle, 37, of Stanton. Jorge Sandoval, Jorge Galindo and Erick Vela were all sentenced to death.

Moore had been on death row for 38 years, and had stopped fighting the state’s attempt to bring capital punishment back to life with his lethal injection death sentence.

That’s not the case for the prisoner who was notified in November by the Department of Correctional Services of the drugs that would be used for his potential execution.

Jose Sandoval was sentenced to death along with Jorge Galindo and Erick Vela for the 2002 shootings and killings of Lisa Bryant, Lola Elwood, Samuel Sun, Jo Mausbach and Evonne Tuttle in a botched bank robbery attempt in Norfolk.

Even though Moore was notified of the drugs that would be used in his death sentence after Sandoval, the state sought his execution warrant first.

A department spokeswoman said the department has not requested a warrant for Sandoval from the Nebraska Supreme Court. But it is continuing to seek lethal injection drugs to replace those that will expire soon.

John Lotter is now the man who has been on death row the longest, but he has received no notification of lethal injection drugs to be used in his sentence.

Lotter and Marvin Nissen were convicted of killing Brandon Teena, a transgender man. They killed Teena in 1993 to silence him after he told police they had raped him. They also killed Lisa Lambert and Phillip DeVine, who lived in the same house in Humboldt as Teena and witnessed the killing. Lotter has maintained his innocence.

Attorneys for Lotter have alleged in a court filing that he is ineligible for the death penalty because he functions intellectually as a child.

Nearly nine months ago, ACLU of Nebraska filed a lawsuit on behalf of most death row inmates, including Sandoval and Lotter, that claims the ballot initiative that stopped the Legislature’s 2015 repeal of the death penalty was illegal.

The suit was an attempt to stop any executions, or even steps toward an execution, of Nebraska’s condemned prisoners. But eight months later, the state put Moore to death.

Sandoval told the Journal Star in November he intended to fight the execution.

Attorney Stu Dornan filed a motion in Madison County District Court in December arguing that Sandoval, 38, should be resentenced to life in prison or have another capital sentencing hearing.

The Legislature repealed the death penalty in May 2015, then nullified the governor’s veto of the bill (LB268) with another vote. The repeal, Dornan said, went into effect Aug. 30 before it was suspended again because of an initiative referendum vote.

“Mr. Sandoval is subject to a uniquely cruel and unprecedented form of psychological suffering through alternating periods of relief and terror as he has been told that his life would be spared, and then told again that he would be executed,” the motion said.

Briefs have been submitted in the ACLU lawsuit in Lancaster County and are awaiting scheduling of oral arguments.

Prisons director Scott Frakes said earlier this month, in an affidavit filed as the result of a motion by drug company Fresenius Kabi to stop the use of two drugs in the execution of Moore, that he had no other source or supplier for the drugs to be used in future executions.

But he is still trying.

One of the drugs, the department’s supply of potassium chloride, will expire Aug. 31, and Frakes said he has no other source or supplier for the drugs at this time. A second drug, cisatracurium, will expire Oct. 31.

Laura Strimple, spokeswoman for the Department of Corrections, said in an email that it is the responsibility of the department to carry out the death sentence orders of the court, and that includes continuing to pursue procuring the necessary lethal injection drugs.

She said she would not speculate on whether the department would consider changing the drugs or the death penalty protocol.

ACLU of Nebraska Executive Director Danielle Conrad said Friday that individual constitutional rights are not decided at the ballot box, and did not give Gov. Pete Ricketts permission to violate the state’s tradition of open government when carrying out government’s most grave function, the death penalty.

“Next legislative session will see a wave of new reform and abolition efforts,” Conrad said.

And ACLU of Nebraska intends to litigate the remaining legal and policy issues surrounding Nebraska’s death penalty, she said.

“We call on the governor to join us in seeking reform of our severely overcrowded and crisis-riddled prison system to advance true public safety goals,” Conrad said. “Nebraska’s troubled history with the death penalty is not over and will saddle Nebraska taxpayers for years to come.