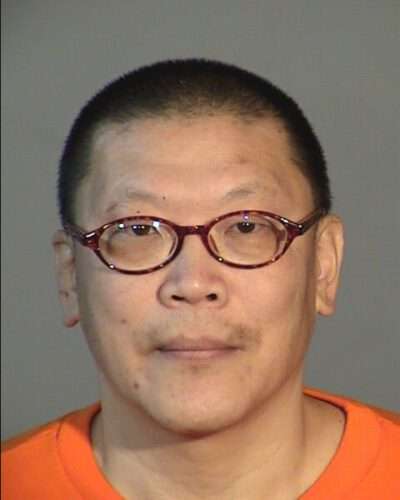 Arizona authorities today identified the serial predator suspect arrested Wednesday after DNA linked him to a series of violent sexual crimes against women, including a pair of unsolved murders.

Trent Christopher Benson, 38, is being held at the Maricopa County Jail. He faces nine criminal charges, including two counts of first-degree murder, two counts or violent sexual assault, three counts of kidnapping and one count of sexual assault, according to a release by the Mesa County Police Department.

Benson will be held without bond and could face additional charges, according to police.

The murder suspect was arrested Wednesday afternoon just two days after authorities announced that DNA had connected two unsolved rape and murders and two recent kidnapping and sexual assaults to a single suspect.

Benson was watched by surveillance for a day before authorities made the arrest.

Police obtained Benson’s DNA from an undisclosed source Tuesday, Mesa Police Department spokesman Steve Berry said at a Wednesday news conference. Investigators expedited the forensics analysis and confirmed that the suspect had the same DNA profile that tied together at least four brutal crimes that raised the specter of a possible serial killer on the loose in an area too familiar with serial crimes.

“We want to let the community know they can relax to a certain extent,” Mesa Police Chief George Gascon said at the news conference. “We feel very comfortable that we can tell the community that the person that is responsible for these cases is in our custody.”

Gascon declined to identify the suspect by name Wednesday, and the department refused to release a booking photograph because authorities want to allow victims to pick the suspect out of a police lineup. A reporter for the East Valley Tribune who watched Benson’s first appearance in court today described the suspect as wearing blue jeans, black loafers and a T-shirt as a Maricopa County judge read the charges against him.

Authorities Wednesday described the suspect, who is “talking with” detectives, as a Mesa resident with a criminal history involving the solicitation of prostitutes. The two murdered women whose bodies were linked to Benson through his DNA both were involved in the sex trade industry.

Before authorities identified the suspect, residents in one neighborhood, as well as customers at a local business, watched as Mesa police executed search warrants tied to the arrest.

Some of them, such as Anne Hickman, knew the male resident who lived in the apartment searched by authorities. “I wouldn’t expect a man like him to act out,” Hickman told ABC News’ Phoenix affiliate.

Mesa police announced May 5 that DNA recovered from an Aug. 16, 2007, sex attack in broad daylight on a Hispanic victim matched forensic evidence collected at the murder scenes of Alisa Marie Beck and Karen Jane Campbell, who were killed in November 2004 and October 2007, respectively.

That connection followed a December 2007 confirmation by police that the same suspect’s DNA had been found at each of the Beck and Campbell crime scenes. Prior to the DNA link, authorities had reason to believe the murders were connected and a serial predator might be at work.

Beck, 25, was found partially clothed in an alleyway Nov 1, 2004. She had been strangled. Campbell, 44, was found naked on a roadway Oct. 24, 2007. Authorities have not revealed exactly how Campbell was murdered — instead simply saying her death was the result of a violent homicide. Both women were transients with histories of drug abuse and prostitution.

A clearer profile of the suspect began to emerge after the August kidnapping and rape, in which the Benson allegedly pulled alongside a 47-year-old Hispanic woman near a busy intersection and jumped out of a white, four-door sedan, according to the Mesa police. The woman struggled with the suspect, but was ultimately pulled into the car and brought to an unknown place where she was sexually assaulted.

The woman, left naked after the assault, was able to flee on foot. She hailed a cab as she dressed herself and was driven to her home, where she called police. DNA was recovered in the sexual assault examination that linked her attacker to the previous homicides.

Before identifying Benson, police recently released some details about the suspect provided by the victim. He was between 25 and 35 years old, about 5 feet 8 inches tall and had short dark hair.

A fourth crime, this one in nearby Phoenix, has also been linked to Benson through DNA. On Nov. 4, a 35-year-old Phoenix woman was abducted, taken to an unknown location, raped and beaten. The woman was ultimately found by a passerby.

Benson’s arrest is not the first involving a serial predator terrorizing the Maricopa County area in the past few years.

In September 2007, a jury convicted Mark Goudeau, 43, on 19 charges tied to an attack on two sisters in a Phoenix park. He was sentenced to 438 years in prison for those charges but still faces nine additional murder counts for a string of shootings that began in 2005 that earned him the nickname the “Baseline Killer.” Prosecutors in Arizona expect to seek the death penalty against Goudeau on the murder charges.

Dale Hausner, 35, faces eight murder counts after his roommate, Samuel Dieteman, entered a guilty plea and agreed to testify against Hausner in his murder trial to potentially avoid a death sentence of his own. The two are accused of randomly shooting at people and animals in serial shootings from 2005 to 2006 that killed eight and wounded 17 more. The pair is also accused of killing several animals.

When authorities arrested the roommates, they found newspaper clippings about the police investigation as well as a map that detailed the locations of some attacks.

Mesa police said Wednesday that they believe Benson may have been involved in other attacks and may not have always acted alone.

A third, unsolved recent murder with similarities to the Beck and Campbell cases has not been connected to the suspect by DNA. Elisa Lea Dewakuku was found dead in an irrigation canal Nov. 1. Dewakuku had been strangled and had drugs in her system, according to police