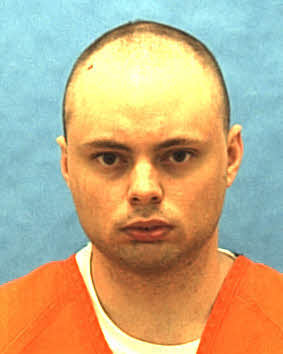 Allred killed Tiffany Barwick, 19, and her friend, Michael Ruschak, 22,
on April 24, 2007, at an Oviedo home Ruschak, a University of Central
Florida student, shared with roommates. Allred also wounded Eric Thomas
Roberts, who tried to wrestle the gun away.

On August 25, 2007, Allred and his girlfriend Tiffany Barwick
publicly and angrily broke up at a party celebrating his twenty-first
birthday. Id. at 1272. Several days later, he used pictures of Barwick
for target practice and sent Barwick a picture of the bullet-ridden
photos. Subsequently, upon learning that Barwick had sexual intercourse
with Michael Ruschak, his best friend, Allred sent them both threatening
messages, and he told his friend Michael Siler that he needed to start
killing some people. Id.
On September 24, the day of the murders,
Allred hacked Barwick’s computer and engaged in a heated exchange of
messages, telling Barwick that he could not forgive her and threatening
to kill Ruschak. Id. at 1273. In a separate exchange, he also told his
friend Siler that he would kill both Barwick and Ruschak. Id. at
1272–73. Sitting at home later that evening, Allred called Ruschak and
announced that he was coming over. Allred then picked up his gun and
drove to Ruschak’s location.
At the time, Ruschak was living at
his friend Eric Roberts’ house, as was Barwick. Four other friends had
arrived for dinner that night, when Ruschak informed them that Allred
was coming. Allred arrived soon thereafter and repeatedly rammed
Barwick’s car with his truck. Then, when no one would let him in the
front door, he shot out the glass back door and entered the house as
everyone fled. Id. at 1273.
After firing a shot down the hallway
at Ruschak, Allred walked through the hall to the kitchen and shot
Ruschak four times, killing him. Then, Roberts grabbed Allred, and they
struggled until Allred shot Roberts in the leg. Allred proceeded to the
hall bathroom where he found Barwick standing in the bathtub,
frantically talking to a 911 operator. “In his confession, Allred
recounted that after he gained his release from Roberts, he entered the
bathroom. Then, without saying a word, he fired [six] shots into
Barwick. She collapsed in the tub and died.” Id. at 1274.
After
leaving the crime scene, [Allred] called 911. He reported that he had
killed two people and threatened to commit suicide. When Deputy Sheriff
David Kohn arrived at Allred’s home, Allred was standing at the end of
his driveway near the road, with a cell phone in his hand and his gun on
the ground. Upon initial contact, Allred told the officer, “I’m the guy
you’re looking for.” After the officer secured him, Allred asked “if
the people were dead,” but the officer told him he could not provide
that information. Then, in the patrol car, Allred stated, “I knew I
killed someone, I shot fourteen times.”
Id. After being turned
over to the Oviedo Police Department and being advised of his rights, he
again confessed to the murders. Id.