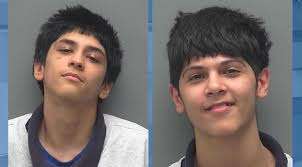 ee County Sheriff’s Office shared on social media two teens have been sentenced for shooting and killing a male taxi driver in Lehigh Acres in 2018.

Angel Arellano, 15, and Epimenio Leal, 17, were sentenced Wednesday to 40 years in prison for the murder of Hinso Estreplit, a self-employed taxi driver.

Both teens pled no contest to and found guilty of charges for First-Degree Murder and Robbery With A Firearm.

In April 2018, Arellano and Leal called for taxi to a remote road in Lehigh Acres, luring a taxi driver to the location. Both teens went up to the driver, shooting and killing him. Then, they stole the victim’s wallet, phone and a metal box containing money.

The two teens face 10 years of probation following time served. The sentence also carries a 25-year minimum mandatory requirement based upon Florida’s 10-20-Life law. Additionally, because they are juveniles, each are entitled to a court review of their sentences after serving 25 years per Florida’s sentencing laws related to the sentencing of juveniles as adults. Both teens were sentenced in Lee County court.

A state correctional officer is recovering after being attacked late last month at Sumter Correctional Institution, the Florida Department of Corrections announced Friday

Six inmates at the Bushnell-area prison were charged in the April 19 attack on the unidentified officer, the agency said.

“I want to commend the staff and inmates who came to this officer’s aid during this vicious attack,” Florida Department of Corrections Secretary Mark Inch said in a statement. “Our officer showed courage and perseverance under extreme duress. I appreciate the quick and thorough investigation into this incident by the Inspector General, which led to the arrest of these inmates.”

A statement from the agency said “multiple inmates” attacked the officer at 2 p.m. Some inmates helped the officer. The attack was brought under control by prison officers at the lockup, which has 1,639-inmate capacity.

The six inmates were charged with aggravated battery on a law enforcement officer, depriving an officer of means of protection/communication, and false mprisonment.

They were taken to the Sumter County Jail and identified as:

“The correctional officer was transported to an area hospital for treatment of non-life-threatening injuries and has since been discharged,” the statement addedd. “The dorm involved in this incident is not under medical isolation or medical quarantine. The entire facility remains on restricted movement.”

Two Lehigh Acres teens, who were 16 and 13 when they killed a taxi driver in 2018, will serve 40-year sentences in his death.

Epimenio Leal, 17, and Angel Arellano, 15, pleaded guilty Thursday, and Circuit Judge Bruce Kyle immediately sentenced them. They had been charged with first-degree murder and robbery with a firearm.

According to court documents, Hinso Estriplet was a 46-year-old self-employed taxi driver. He advertised his work on a website and on Facebook.

The boys called Estriplet for a ride in an attempt to rob him. Then, lured to a remote Lehigh Acres spot, both shot him, police said.

The Office of the State Attorney said they took his wallet, phone and a metal box containing money.

They left with a waiting friend, Ricky Ligonde, 20 at the time of the murder.

Ligonde pleaded guilty to second-degree murder with a firearm and robbery with a firearm in March. Kyle sentenced him to 20 years on each count, to be served concurrently.

According to his arrest affidavit, Ligonde drove the pair after the robbery, having full knowledge of it prior to it happening, and received $40.

Police arrested Leal and Arellano a month later. Court records indicate they had the guns, later determined used in the killing, cocaine and drug paraphernalia with them.

Prior to the pair’s charges, the most recent child charged on first-degree murder charges was a 13-year-old in 2015. Joel Munoz was indicted after killing a homeless man in a wooded area of Cape Coral. A plea agreement in exchange for a guilty plea lowered the charge to second-degree murder. He is serving a 25-year sentence.

Because they are juveniles, the state attorney said, Leal and Arellano are entitled to a court review of their sentences after they serve 25 years, as per Florida’s sentencing laws related to the sentencing of juveniles as adults.