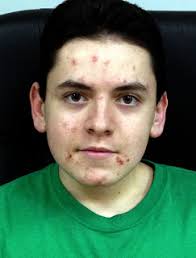 Eldon Samuel was fourteen years old when he murdered his father and his younger brother. According to court documents Eldon home life was a complete disaster with his father preparing his sons for the zombie apocalypse and his mother fighting drug addiction. On the day of the murder Eldon would fatally shoot his father before attacking his thirteen year old brother with a machete stabbing him to death. At trial Eldon was convicted of two counts of first degree murder and sentenced to life in prison with a possibility of parole. This teen killer first shot at parole will be in 2038 according to the Idaho Department Of Corrections

The father of Coeur d’Alene teenager Eldon Samuel III showed the boy how to use weapons from a young age and also trained him to prepare for a “zombie apocalypse,” Samuel’s mother said in court Wednesday.

Samuel’s public defender asked Tina Samuel to explain what her husband trained her son to do to zombies.

“To shoot them in the head and chop off their head,” she testified. “That’s the only way to kill a zombie.”

Eldon Samuel, 16, is on trial for murder in the March 2014 killing of his father and his 13-year-old brother. The Kootenai County Prosecuting Attorney’s office concluded its case Tuesday, and lawyers for Samuel began calling their witnesses from a list of more than 200 names.

Tina Samuel spoke of her relationship with the boy’s father, Eldon Samuel Jr., as well as his habits and demeanor when the family lived together in the Modesto, California, area. She said JR, as she called her husband, was high on prescription medication much of the time, and she admitted she was as well, “off and on.”

JR began playing these games with his son Eldon when the boy was as young as 4 or 5, Tina Samuel said.

The family moved frequently, usually because of eviction. “JR wouldn’t pay the rent and bills,” she said.

JR worked part of the time as a mechanic and had injured himself at work a couple of times. He began taking medication for a shoulder injury and never stopped, she said.

“He was moody. He was high a lot, controlling, physically and mentally abusive,” Tina Samuel testified, adding that the behavior grew worse over time. JR owned a 9 mm handgun, which he kept tucked in the back of his waistband, she said.

The family sometimes went camping in a trailer in secluded spots high in the California mountains, she testified. JR would bring guns and knives on those trips and show his boys how to use the weapons, including cutting the head and tail off a rattlesnake, she said.

At night they’d watch zombie movies in the trailer, she said.

By the time Eldon was in middle school he was missing days, in part because he was bullied by other kids at school, the mother said. The boy stayed at home with his father watching “bad” movies and playing “bad” video games, she said.

The family also prepared to flee a zombie outbreak at a moment’s notice, she said. That plan entailed packing the camp trailer with “guns, knives – as many as possible,” plus water, canned food and clothing, Tina Samuel testified. Then they would “go up high in the mountains where we could hide from the zombies,” she said. “Because it’s secluded and the zombies wouldn’t get us.”

As for young Eldon, “I observed he listened to his dad and he was trained to be ready when the zombies came,” she said.

Tina Samuel said she left her husband scores of times but always returned “for my boys.” The couple separated in May 2012 after 14 years of marriage, and Eldon Samuel Jr. moved to Coeur d’Alene with his sons the following year. His father, Eldon Samuel Sr., also lives in Coeur d’Alene.

The jury on Wednesday also heard from two of Samuel’s teachers at Lakes Magnet Middle School, where he was struggling with his grades and frequently was absent. Jurors also heard testimony from a local pediatrician who examined Samuel and spoke with him about headaches and various pains he reported having, and from a local dentist who has been treating Samuel for cavities and other dental problems.

A woman who works at a military surplus store described how Samuel’s father bought him a trench knife with a blade 8 to 10 inches long for the boy’s birthday. A local Game Stop store manager listed the titles of video games Eldon Samuel Jr. had purchased, including violent games rated for older players as well as some titles approved for all ages.

Samuel is charged with second-degree murder in the death of his father, who died from a gunshot wound to his upper abdomen. Samuel shot his father three more times, in the cheek and head, after he was dead, investigators say.

He is charged with first-degree murder in the death of Jonathan Samuel, his autistic brother who was 11 months younger than he. Jonathan was shot 10 times by a shotgun and .45 semi-automatic handgun, then stabbed with a knife and hacked with a machete dozens of times. He bled to death from numerous wounds, according to an autopsy, and was found sprawled across the lap of his father’s body.

Eldon Samuel, then 14, admitted during police questioning that he had killed both of them the evening of March 24, 2014. He said his father had been talking that night about zombies and how they needed to pack up and leave. He also told detectives his father had fired one shot from the .45 outside the house that evening.

Several witnesses have testified hearing a gunshot, and a couple who lived across the street from the Samuels’ house said they saw the father outside that evening, pacing and looking upset.