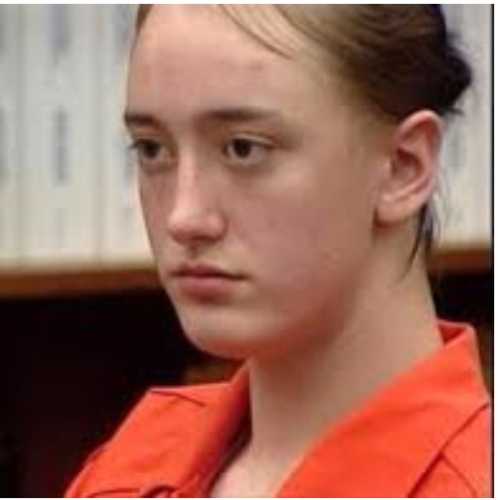 An uneasy mixture of sadness, anger and compassion hung in the courtroom air yesterday as a 16-year-old girl who fatally bludgeoned her mother with a claw hammer was sentenced to prison.

The mood was punctuated by several heavy sighs from onlookers. One came from the girl’s father, who forgave her for murdering his wife of 30 years. Another came from the judge who sentenced Heather Marie D’Aoust to 16 years to life.

San Diego Superior Court Judge Michael Wellington said that he was convinced Heather suffered from a severe mental health disorder but that it was not a legal defense in this case.

According to court documents, she initially wanted to use a baseball bat and woke up at 4 a.m. to test the weapon on a tree. But she lost her nerve and thought to herself, “I’m insane,” Heather told a probation officer during a pre-sentence interview.

At one point, she planned to kill everyone in the house, including her sister and her sister’s boyfriend, according to the documents. She later thought that she would kill the first person who woke up in the family’s Scripps Ranch home.

Heather pleaded guilty last month to second-degree murder and admitted she used a deadly weapon in the May 2008 attack on Rebecca D’Aoust, 56, a teacher and counselor with the San Diego Unified School District.

The teenager also pleaded guilty to assault with a deadly weapon for striking her father with the hammer that morning. He was not seriously injured.

Heather, who was 14 when the crimes occurred, was charged as an adult.

From the day his daughter first appeared at the downtown San Diego courthouse, James D’Aoust insisted she was not “evil” but suffered from mental problems she likely inherited from her biological parents. D’Aoust and his wife adopted Heather as an infant.

Yesterday, he noted she was recently prescribed a “cocktail” of medications that improved her psychological condition.

“The Heather I visit at Juvenile Hall is not that angry girl that killed Becky but the wonderful girl that we raised,” he said.

James D’Aoust said that Heather’s actions caused the family “incredible loss” but that she is now “moving in the right direction” and he would continue to support her.

“I just can’t forgive her,” said Richard McGrath, who described his daughter Rebecca as a loving, doting mother.

Heather cried softly as her father and grandfather spoke. When it was her turn, she apologized to her family, including her two older sisters, and told them she loved them. One responded, “I love you, too, Heather.” The other turned away.

Heather said she did not hate her mother but was unable to explain her actions. She said that her parents tried to get her the help she needed but that it came too late.

“I didn’t mean to hurt you,” she told her family. “I wasn’t able to stop myself.”

Her lawyer, Paul Pfingst, said this was the most unusual and inexplicable case he had seen in a career of more than 30 years as a prosecutor and defense lawyer.

Pfingst said he had mixed feelings about the outcome but that Heather wanted to be locked up.

“She’s afraid of what happens if she’s not in a controlled environment,” Pfingst said. “She remembers the days on the outside as being bad days — chaos inside of her mind.”

He said Heather likely would have to serve 16 years before she is eligible for parole.

Rebecca D’Aoust’s body was found on the kitchen floor of the family’s home on May 25, 2008. She died at a hospital the next day.

According to court documents, Heather said she and her mother had been arguing over little things for about a year before the attack. The day before the fatal attack, mother and daughter argued when Heather was caught in her bedroom engaging in a sex act with a girl.

Later that evening, Heather went to dinner with her parents and convinced herself that she should kill them. Her sister’s boyfriend was the first to wake up the next morning. Heather hid until he left the house.

She told the probation officer that the hammer was tucked inside a pocket of her clothing when she greeted Rebecca D’Aoust in the kitchen shortly after 8 a.m. It knocked against the refrigerator door when her mother asked her to get the orange juice.

After a brief argument about medication, Heather said she counted to three and struck her mother in the head.

She remembered her mother asking, “What are you doing?” then screaming. Heather said she kept hitting until the screams stopped.

Awakened by the noise, James D’Aoust ran downstairs and grabbed Heather as she tried to flee. He pinned her down while his oldest daughter called 911.