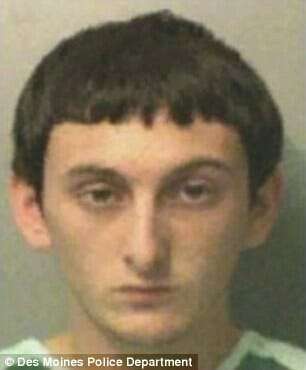 Jayden Straight was seventeen years old when he murdered his eight month old child. According to court documents Jayden violently shook the small infant to such a degree her skull was fractured causing her death. This teen killer was charged and convicted of second degree murder and willful injury to a child and was sentenced to a total of one hundred years in prison making him eligible for release in 2119

A Des Moines man who was 17 years old when he violently shook and killed his baby will likely spend the rest of his life behind bars.

Jayden Straight was sentenced to a total of 100 years in prison on Friday after pleading guilty to second-degree murder, willful injury and child endangerment.

His daughter, 8-month-old Raija Straight, died in the hospital last July. Police said she had multiple skull fractures, broken ribs and internal injuries when her father brought her in.  Raija’s mother says her daughter was not only shaken but hit multiple times by Jayden Straight as well.

An 18 year-old killer was jailed for 100 years after battering his eight month-old baby daughter so badly her skull was totally shattered. Jayden Straight was handed the century-long sentence Friday after admitting the July 2018 murder of baby Raija Straight in Des Moines, Iowa. The killer, who was 17 at the time of the murder, left his baby suffering serious internal injuries, including multiple skull fractures, broken ribs, a ruptured spleen and massive retinal hemorrhaging. Straight’s partner Ri Bambino left him in the care of their tiny daughter on the afternoon she was fatally injured to go and run errands.

After handing himself in the next day, he was unable to provide any explanation for the wounds inflicted on Raija, and has since failed to provide any motive for his daughter’s death. A doctor who treated the baby in hospital before she died said the injuries were ‘from a deliberate assault and could not be explained as unintentional or accidental.’

The Des Moines Register reported that Straight was jailed for 50 years for second-degree murder. He was handed a further five decade-long sentences for three counts of willful injury and two counts of child endangerment resulting in serious injury. All six sentences will run consecutively, meaning Straight will not be released from jail before 2119. Paying tribute to Raija, the infant’s great-grandma Robin Head said: ‘When I saw this child’s face and what she has brought to me for the last eight months of her life. ‘I can’t never explain that feeling of holding her, laughing with her, touching her, walking with her, crawling with her.’
https://metro.co.uk/2019/11/11/killer-18-jailed-100-years-shattering-baby-daughters-skull-11078888/