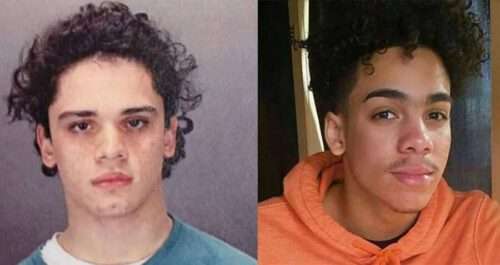 Mathew Borges was fifteen years old when he murdered a classmate in a a brutal fashion. According to court documents Borges was upset that the victim spent time with his girlfriend so he would lure the other teenager to a remote location where he was stabbed over seventy times. Mathew would then cut off the head of the victim along with his hands so he would be harder to identify. This teen killer would be sentenced to two life sentences with no parole.

A teenager was found guilty of stabbing his 16-year-old classmate 76 times before cutting his head off. Mathew Borges, 18, was convicted of murdering Lee Manuel Viloria-Paulino, whose body was found on the Merrimack River in Lawrence, Massachusetts in December 2016. Authorities said Mathew Borges beheaded Viloria-Paulino and cut off his hands so he would not be identified. His head was found in a plastic bag near his body, although his hands were never located. Prosecutor Jay Gubitose said Mathew Borges, who was 15 when killed Viloria-Paulino, committed the heinous act of violence because he was jealous Viloria-Paulino had spent time with his girlfriend. According to Gubitose, there was a ‘mountain of evidence’ against Borges that includes text and messages with friends, as well as a notebook that planned the murder, CBS reported.

The prosecutor cited a text message that Mathew Borges sent, saying ‘This (text message) is to Stephanie, 24 hours before he kills Lee: “Take a good look at my eyes the next time we talk because that may be the last time you see them like that ever again.’ Gubitose continued: ‘She says “don’t say that, I don’t want to see your eyes dead.” (Borges replies) “No, don’t, it’s true. I know what I’m going to do and I can’t do anything about it. People will notice a big difference in me once my eyes turn dead.’”

Four teenagers testified that Mathew Borges lured Viloria-Paulino away from his home, down to the river to smoke weed, on November 18, 2016 so they could steal clothes and a Playstation from his home. After the burglary, the teen claimed Borges called them and said, on speaker phone, that he had killed Viloria-Paulino, according to MassLive. Borges’ attorney, Ed Hayden, dismissed both the theory that his client killed out of jealousy, as well as the teens’ testimony about the robbery.

He said: ‘Mathew Borges is their “stay our of jail” card and they play it masterfully…none of these kids went to the river to see if a body was there? That’s not believable.’ Hayden questioned the prosecutors case, citing a lack of evidence against Mathew Borges, saying ‘There is no crime scene. There is no scene where the body was dismembered. There is no murder weapon, no tool used to dismember the body, no DNA, no blood, no fingerprints and there is no motive.’

Gubitose called Hayden’s questions ‘distractions’ and said: ‘Every piece of evidence points to him. Maybe it’s hard to believe a 15-year-old kid can kill someone, but that’s the world we lived…He’s the only one. He killed Lee.’ On Tuesday, a jury delivered their guilty verdict after deliberating for approximately nine hours in Salem Superior Court. Mathew Borges faces 25 to 30 years in prison with a possibility for parole in 25, years according to the Essex County District Attorney’s Office. He is set to be sentenced on July 9, according to the Eagle Tribune.

The Lawrence High School student who beheaded his classmate in 2016 and left his decapitated body near the Merrimack River, was sentenced to 30 years to life in Salem Superior Court on Tuesday for each of his charges.

Mathew Borges, 18, was found guilty of first-degree murder with premeditation and extreme cruelty and atrocity following his 10 day murder trial in April and May. Borges was sentenced to 30 years to life for each charge, to be served concurrently. He will be eligible for parole on both charges after 30 years.

Though Borges was 15 when he killed Lee Manuel Viloria-Paulino he was tried as an adult.

Prosecutors relied heavily on social media and text conversations as they presented their case against Borges. The defense did not call any witnesses and Borges did not testify on his own behalf.

Borges and a group of friends reportedly planned to rob Viloria-Paulino the day he went missing. He was to take the 16-year-old to the Merrimack River to smoke weed while friends stole Viloria-Paulino’s PlayStation, clothes, belts and other items, Borges’ friends testified during the trial.

“He said he stabbed him” and cut off his head “so he wouldn’t be caught,” Jonathan Miranda, 18, testified, according to The Eagle Tribune.

A motive for the slaying has never been identified.

During the trial, Ed Hayden, who represented Borges, pointed to a lack of physical evidence. He said though the Borges and Viloria-Paulino families deserved the truth, they did not get it during trial.

All of the teenagers called to testify said Borges and Viloria-Paulino were friendly. But two of Borges’ ex-girlfriends spoke about his jealousy.

Leilany DeJesus, who dated Borges during their freshman year of high school, told the court that after she and Borges broke up he asked if she was sleeping with other boys at school. He mentioned Viloria-Paulino by name, she said.

Stephanie Soriano, who also dated Borges, testified that he got angry at her for saying hello to Viloria-Paulino at school.

Borges sent Soriano a message saying she was his and he would kill anyone “who get in way of me getting what I want.”

In other conversations with Soriano, Borges spoke about demons.

“I think of killing someone and I smirk. It’s all I think about every day but I control myself. I see people I don’t like [and] that comes to mind. I’m going insane,” he wrote in one message.

On Nov. 17 2016, a day before Borges killed Viloria-Paulino, he asked Soriano if his eyes looked dead.

“Eyes that are dead are scary…makes you think about what that person has done. What they’ve been through. What they’ve seen. Eyes that don’t shine, that are full of darkness,” Borges said in the recording. “It’s just sad. It’s like these people are different. They’ve done things that make them lose their humanity. Like they have no soul, they just have big black pupils,” Borges said in a voice message sent to Soriano

He told Soriano to look carefully at his eyes the next time she saw him.

He would have dead eyes soon, too, he said

A Massachusetts teenager convicted of fatally stabbing and then decapitating a high school classmate has been sentenced to life in prison.

Mathew Borges, 18, of Lawrence, will be eligible for parole in 30 years under the maximum allowable sentence handed down on Tuesday by Superior Court Judge Helene Kanzajian.

A jury convicted Borges in May of first-degree murder in the November 2016 killing of 16-year-old Lee Manuel Viloria-Paulino. Viloria-Paulino’s decapitated body and head were found along the banks of a river by a dog walker.

Prosecutors say Borges was jealous the victim had spent time with a girl he liked.

Under Massachusetts law, a first-degree murder conviction carries a life sentence without the possibility of parole for adults. But parole eligibility must be added if the crime was committed as a juvenile.