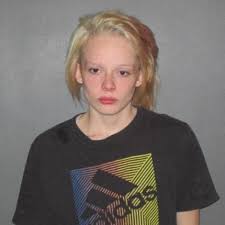 Shyanne Parrott was seventeen years old when she murdered a love rival by running down the woman with a truck. According to court documents Shyanne Parrott and the woman were involved in a series of conflicts involving dating the same man.

Those conflicts would come to a brutal end when the teen killer would drive onto a sidewalk, striking and killing the woman before driving off. Shyanne Parrott would plead guilty to second degree murder and would be sentenced to fifty years to eighty years in prison

entered a plea in Otoe County Court on Tuesday.

ShyAnne Parrott, 18, pleaded guilty to second-degree murder. Other charges of first-degree murder, use of a deadly weapon to commit a felony, and failing to stop and render aid were dropped.

Parrott is accused of running down 20-year-old Amber Shipley with a pickup in September 2015. Investigators said Shipley was on the sidewalk outside of the Nebraska City library when Parrott drove her pickup truck onto the sidewalk, striking Shipley, before she drove off.

Tuesday, many of Amber’s family members gathered inside Otoe County District Court. It was an emotional day in court for Shipley’s mother, Sherry Bright.

“To hear her say that she did it. She actually had to say I’m guilty. I did it,” said Bright.

Tuesday’s proceedings brought some comfort to Amber’s mother who still clings tightly to her daughter’s ashes.

“This is all I’ve got of my little girl,” Bright told WOWT 6 News

Parrott’s father later turned his daughter over to police. Shipleypassed away at a hospital days after the incident

. The pickup that was used in the attack belongs to Parrott’s dad; it’s still a sore subject for amber’s mother.

“I called the police department the other day, because I wanted to know what was going to happen to the truck, and they told me they still had it in evidence, and he wasn’t sure when, but it would go back to her dad when it was released. My request to him would be to crush it! Destroy it! I don’t want to see that truck going down the street,” said Bright.

Despite all that the drama that may have existed between Amber and ShyAnne, Defense Attorney Jerry Sena says he knows firsthand how sorry his client is.

“She’s told me many times, that’s one of the hardest things for her is to live with the fact that Amber’s gone,” said Sena.

Parrott will be sentenced on July 21st.

“She should not be out in time to have the life she took from my daughter,” Bright said.

Nebraska City teen who pleaded guilty to fatally striking a woman with a pickup truck was sentenced Wednesday to 50 to 80 years in prison.

She will receive credit for 311 days served and could be eligible for parole after 25 years, according to the good-time law.

Otoe County Attorney David Partsch had said Parrott and Shipley were involved in a verbal confrontation at the library. Parrott left in her father’s pickup truck and saw Shipley standing outside waiting for a friend.

Parrott drove past Shipley, who threw her coat and walked confrontationally toward the truck, Partsch said.

Parrott turned around and struck Shipley head on, dragging her underneath the truck. Shipley died nine days later of blunt force head trauma.

Parrott’s attorney, Jerry Sena of Omaha, had called the incident a “sudden impulse” that lasted 60 seconds.

A Nebraska woman who pleaded guilty to running down another woman will spend decades behind bars.

Shyanne Parrot, 18, was sentenced to 50 to 80 years in prison for the attack.

According to police and prosecutors, Parrott and Amber Shipley got into an argument outside the Nebraska City Library last September.

Parrott left the scene, then drove back, and ran over Shipley with her truck, witnesses and police said.

Shipley died a week later from her injuries.

Parrott’s mother told KETV in an interview that she believed the attack happened as the result of an ongoing dispute between the two over a boyfriend.

Parrott will get credit for the nearly 12 months she has already spent in jail.