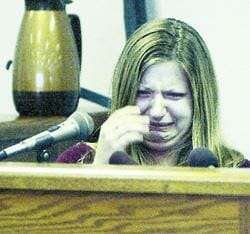 Stephanie Olsen was a seventeen year old from Kentucky who along with her boyfriend David Dressman would stab her mother to death. According to court documents Stephanie Olsen and her mother had different opinions regarding David Dressman and when her mother refused to let her teenage daughter move out the teenage couple decided to murder her. The teenage couple who would flee the State a month before the murder made it to Georgia before being picked up and sent back to Kentucky. The two teenagers would enlist yet another teen, Timothy Crabtree, who they promised a portion of the life insurance.

Stephanie Olsen would lure her mother to her bedroom with David following behind. The mother would be stabbed repeatedly leading to her death. Stephanie Olsen and David Dressman would leave the home for the night. The next day Stephanie would go back to the home and call police.

Initially David Dressman and Timothy Crabtree were arrested and charged with the murder. Stephanie Olsen would be arrested ten months later. Timothy Crabtree would plead guilty to conspiracy to commit murder and received six years. David Dressman would receive twenty years for the conspiracy and ten years for burglary. This teen killer received twenty five years in prison.

A woman convicted of complicity in the 2002 stabbing death of her mother at their home in The Colony has lost a bid for a reduced sentence.

Isaacs said Olsen’s motion, filed in October 2014, unsuccessfully argued that her being a minor who was tried as an adult and a lack of physical evidence against her, as well as her actions during her imprisonment since 2005, provided reason to trim her sentence.

Crabtree pleaded guilty to conspiracy and was sentenced to six years.

In her motion for a reduced sentence, Olsen cites “numerous mitigating factors, all of which were introduced at trial.”

One such factor was her being 17 years old at the time of her mother’s murder, that her co-defendants received lesser sentences and that she has overcome addiction issues she had at the time of the crime.

In his response, Assistant Commonwealth’s Attorney Keith Eardley says there is no “factual or legal basis” to permit a sentence reduction.

“The positive steps [Olsen] has taken while incarcerated, while commendable, have nothing to do with the fundamental fairness of the trial proceeding and do not constitute a basis for relief,” Eardley wrote in his Aug. 21, 2015, response.

Olsen currently is incarcerated in the Kentucky Correctional Institution for Women at Pewee Valley.

State Corrections Department online records show  her maximum sentence would expire Sept. 8, 2029, while her expected time to serve is until April 24, 2027.

After more than eight hours of deliberations lasting into Friday morning, a Scott County jury found Stephanie Olsen guilty of a charge of complicity to murder her mother.

Stephanie Olsen screamed “Oh my God” and started crying after the verdict was read at 12:45 a.m. Her dad and stepmother also cried as they watched bailiffs lead Olson to the Scott County Detention Center.

The penalty phase will begin at 10 a.m. today. The jury could sentence Olson to 20 years to life in prison without the possibility of parole.

Prosecutors say Stephanie Olsen conspired with her then-boyfriend, David Dressman, and Timothy Crabtree to kill Diane Snellen for financial gain and due to rifts with her mother over Dressman.

Dressman has been charged with murdering Snellen, while Crabtree accepted a prosecution’s deal and entered an Alford plea to a lesser charge of conspiracy. The plea allows Crabtree to recognize the evidence against him without admitting guilt.

Snellen, a 41-year-old Toyota employee, was found nude on the floor of her daughter’s upstairs bedroom with 27 stab wounds to her chest, neck and head on June 6, 2002.

During his closing argument, Commonwealth’s Attorney Gordie Shaw called Snellen’s murder one of the worst he had ever seen, saying her killing was something “personal” and left Snellen with no time to struggle.

“When this happened, it happened fast, it happened hard,” Shaw said, adding that Snellen’s body looked as though she had been hit by a truck.

Shaw said Stephanie Olson wanted her mother dead so she could lead her own life, a life without Snellen’s rules and restrictions.

“She couldn’t wait six months to turn 18, and maybe she wanted the money with no wait,” Shaw said. “I don’t know what goes through the mind of somebody like that.”

Shaw said Snellen was killed sometime after Stephanie Olson got off the phone with her mother at 10:26 p.m. and before Olson and Dressman went to Lexington after midnight. Defense attorney Rodney Barnes challenged the time of death, saying the prosecution had presented “too tight of a time frame” for the murder to have taken place and for evidence to have been destroyed.

Instead, Barnes told jurors police zeroed in on Stephanie Olson and ignored other leads, focusing on his client because she had lied about leaving her friends’ apartment because she bought marijuana and later had sex.

“They made up their mind the day after this murder,” Barnes said.

Shaw denied Barnes’ allegations, mentioning the work Bell had done by contacting other agencies and eliminating other suspects.

“They had some darn good suspects in the first 24 hours, but they didn’t shut down their investigation,” Shaw said of the police. “They kept going.”

Shaw pointed out that when Stephanie Olson was approached by Georgetown Police Sgt. Matt Sly after a failed attempt to go to Florida with Dressman, the teen admitted smoking pot. Olson also told Officer Tom Payne outside of her home that she had gone parking with her boyfriend when he responded to Olson’s 911 call.

“Folks, I’m telling you, their defense was gone with our first two witnesses,” Shaw told jurors.

Barnes also spoke to the lack of physical evidence in the case and questioned the credibility of several of the prosecution’s witnesses, including Crabtree.

Having once been charged with murder, burglary and complicity to murder, Barnes said the prosecution must have “been really hungry” to offer Crabtree a deal where he will serve a maximum of six years in prison.