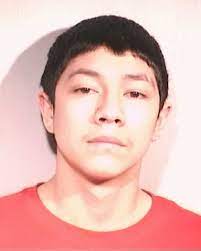 Victor Salinas-Corona was seventeen years old from Zion Illinois when he murdered his five month old son. According to court documents Victor Salinas-Corona would slam the child’s head against the metal bars on his crib when he would not stop crying. This teen killer would be sentenced to twenty three years in prison. As you can see from the mugshots below Victor Salinas-Corona appearance has drastically changed in the last seven years and chances are he is portraying himself as a hardcore gang member instead of a baby killer

A man who was 17 when his infant son died in Zion last year was sentenced Monday to 23 years in prison for the boy’s murder.

Victor Salinas-Corona gave a tearful statement in a Lake County courtroom before his sentence was announced, saying he loved his son Ayden and doesn’t know why he harmed the boy.

Authorities said Victor Salinas-Corona, now 18, previously pleaded guilty to slamming the 5-month-old boy’s head into the metal rails in his crib, killing him instantly, in February 2013. They said the young father was frustrated because the child would not stop crying.

Dozens of people wrote letters to the court seeking leniency for Salinas-Corona, and several people, mainly family members, gave impact statements in court Monday. Relatives believe he suffered psychological damage when he was attacked by a group of people at the age of 15, and they said he was overwhelmed by being a father at such a young age.

Prosecutors sought 20 to 30 years in prison for Salinas-Corona.

An 18-year-old north suburban man was sentenced to 23 years in prison Monday after pleading guilty earlier this year to murdering his five-month-old son.

Victor Salinas-Corona, of Zion, faced between 20 and 30 years in exchange for his guilty plea to first-degree murder under a negotiated deal between prosecutors and defense attorney that was approved by Judge Mark Levitt in July.

After a lengthy hearing Monday afternoon, Levitt handed down the 23-year sentence, which must be served in full at 100 percent.

Assistant State’s Attorney Jim Newman had asked for a sentence at or near the 30-year cap, while defense attorney Scott Gordon had requested the minimum 20-year-sentence.

“We respect the judge’s decision. He listened carefully to both sides,” said Newman, who prosecuted the case along with Assistant State’s Attorney Matt DeMartini.

The child, Ayden Salinas, died as a result of injuries suffered during the night of Feb. 27 and the early morning of Feb. 28, 2013.

The baby died of “abusive head trauma” according to autopsy reports, Newman said were found to be consistent with accounts that the child’s head was struck against a crib.

Newman said at Monday’s hearing that Salinas-Corona had a “support network” including family living in the same building that could have helped take care of the baby, but instead turned to lethal violence after being frustrated by the child’s crying.

Defense attorney Scott Gordon noted that Salinas-Corona, who was 17 at the time of the murder, had himself been the victim of a violent crime when he was attacked by a group of men in 2010, and offered that potential trauma as mitigation in the sentencing hearing.

The baby’s mother, Aurora Escamilla, 20, of Beach Park, pleaded guilty earlier this year to a misdemeanor child endangerment charge and was fined court costs in her case. She also spent time in Lake County Jail prior to her sentencing.

Escamilla was present when the child was killed, but was not a participant in the beating and cooperated with authorities, according to Newman and her defense attorney, Tom Briscoe.

Salinas-Corona has been held in Lake County Jail in lieu of a $2 million bond, and will now be transferred to an Illinois Department of Corrections facility in the near future.