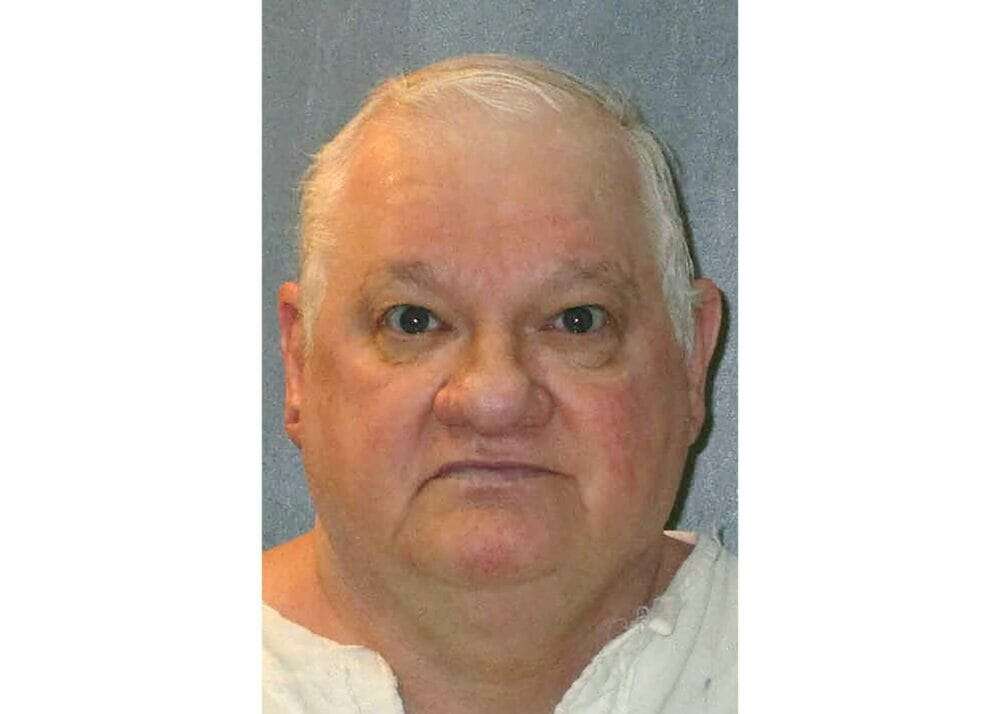 In 2003, an 89-year-old woman and her 71-year-old daughter were stabbed to death in their Fort Worth home. On Wednesday, Texas executed Billy Crutsinger for the crime.

Crutsinger was sentenced to death for the home robbery and slayings of Pearl Magouirk and her daughter, Patricia Syren. The two women were found two days after their murders, and police tracked Crutsinger to a Galveston bar using Syren’s credit card, according to court records.

In Tarrant County, Assistant Criminal District Attorney and lead prosecutor Michele Hartmann said Tuesday the loss of the mother and daughter “is still felt deeply by their family and the Fort Worth community.”

After his last appeals were denied by the U.S. Supreme Court just minutes before his execution was scheduled to begin at 6 p.m., Crutsinger, 64, was strapped to a gurney in the death chamber in Huntsville. No relatives of the women were present to witness the execution, according to a prison spokesman. Crutsinger had three friends in the viewing room, who, in his final words, he thanked for coming and supporting other death row inmates. Into the microphone hanging above his head, he said the system “is not completely right,” but he was at peace and was going to be with Jesus and his family.

“I am going to miss those pancakes and those old time black and white shows,” he said. “Where I am going everything will be in color.”

Crutsinger was then injected with a lethal dose of pentobarbital at 6:27 p.m., and pronounced dead 13 minutes later, according to the prison department. He was the fifth person executed in Texas this year and the 14th in the country.

After the murders, Crutsinger was arrested — albeit illegally — after he didn’t identify himself to police in Galveston. He consented to a DNA swab that linked him to the crime scene and confessed to the murders while in custody, the records state.

A judge ruled that police were not justified in arresting Crutsinger on the spot for credit card abuse because they didn’t have a warrant, and he didn’t commit the crime of failure to identify himself before his arrest. Still, despite the illegal arrest, the judge found his confession and DNA sample were admissible evidence in court because the police conduct was not “purposeful or flagrant,” and there was probable cause for his arrest, just not a warrant.

During his nearly 16 years on death row, Crutsinger appealed his sentence arguing against the legal validity of his confession and DNA sample. But more recently, he pointed to his lawyers’ failings.

Crutsinger argued that his trial lawyer failed to adequately investigate mitigating factors that could have swayed the jury to hand down a sentence of life in prison instead of execution. Specifically, he claimed the attorney overlooked evidence of mental impairment caused by alcohol addiction, head trauma, depression and low intelligence, according to a recent federal district court ruling.

His most recent lawyer, Lydia Brandt, had also knocked his state appellate lawyer — claiming his incompetence and the courts’ refusal to grant investigatory funding kept Crutsinger from any meaningful appeals process. She noted that a judge in another capital case found Crutsinger’s state appellate lawyer “sloppy” and lacking professionalism, and that his filings were “poorly done and of minimal assistance to the court,” according to Crutsinger’s petition.

“The State of Texas denied Mr. Crutsinger his initial right to one full and fair opportunity to present his claims concerning violations of his fundamental constitutional rights,” Brandt wrote in a final appeal to the U.S. Supreme Court last week.

Brandt did not respond to The Texas Tribune on Tuesday.

The federal courts, as well as the Texas Criminal Court of Appeals, rejected his arguments. U.S. District Court Judge Terry Means ruled last month that despite a lack of funding for Crutsinger to investigate it, Means fully addressed the merits of the ineffective counsel claim and found it was without merit. He referred to trial records that revealed the lawyer presenting multiple witnesses at the phase of trial where jurors weigh questions that lead to life in prison or death, including prison officers who testified to his good behavior and family members who described his grief and issues with drinking.

According to the testimony of his ex-wife and wife at the time of trial, Crutsinger had lost a newborn daughter; his toddler son to drowning; his teenage son to lymphoma; his brother from illness; his father, who was hit by a car; and his sister, who was killed in a car crash in which he was driving.

“The assertions that the denial of funding precluded a true merits review and that trial counsel’s representation was egregious, border on frivolous,” Means wrote. “… His conclusion that trial counsel failed to explore his alcoholism, his ‘personality change’ after a single drink, his history of domestic violence and abuse, and his repeated losses of significant friends and relatives, is completely false.”

Earlier rulings in Crutsinger’s case from the federal district court and the 5th U.S. Circuit Court of Appeals have been highlighted by the U.S. Supreme Court, though, when pointing out that the appellate court overly limited investigatory funding. Although the courts reexamined the case and still denied funding and declined to reopen the case for further review, one appellate judge split from his court’s ruling.

Judge James Graves on the 5th Circuit court said last week he would stop Wednesday’s execution. He said earlier that Means’ ruling on the merits of Crutsinger’s claim came before he had any funds to further investigate the issue, so it was not yet developed for such a ruling.

There are 10 other Texas executions scheduled through December.