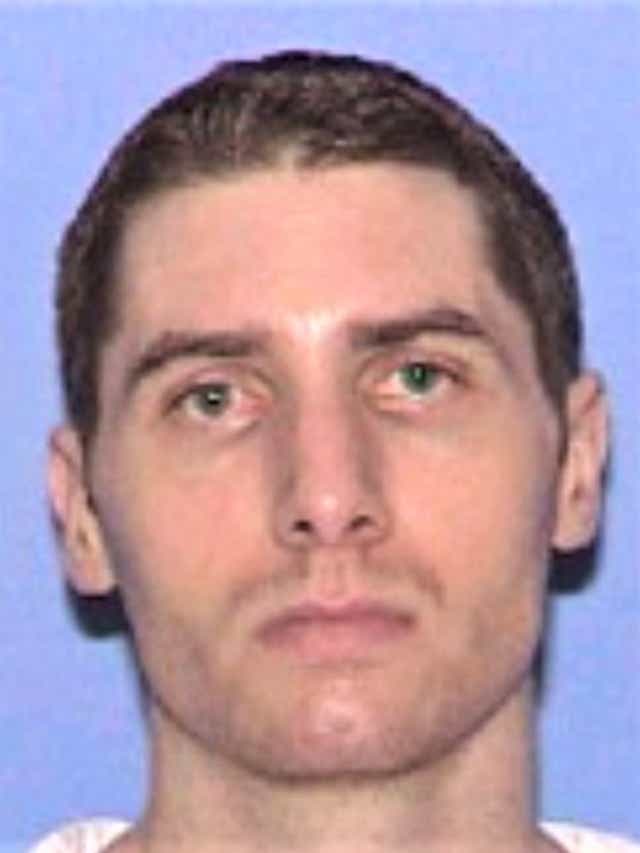 Texas executed a 38-year-old man Wednesday night for the 2002 slaying of a woman in El Paso.

Justen Hall was the eighth person executed in Texas in 2019. Just after 6 p.m., he was strapped to a gurney in the Huntsville execution chamber. Hall, identified in court documents as a district captain of a white nationalist gang, was convicted in the strangling of Melanie Billhartz in El Paso.

Billhartz’s cousin, Cameron Rountree,along with Hall’s mother and half-sister, watched from the viewing room as Hall was injected with a lethal dose of pentobarbital at 6:13 p.m. He was pronounced dead at 6:32 p.m.

In his final statement, Hall said he wanted to address Billhartz’s relatives and “apologize for the pain and suffering” he caused.

Hall killed Billhartz while out on bond from a previous murder charge, according to media reports. Newspaper articles identified that previous murder victim as Arlene Diaz. During a 2017 court hearing, Hall admitted killing Diaz.

“And to the Diaz family that I had to put you through this, it should have never happened,” Hall said shortly before his death Wednesday, according to prison officials.

Hall’s lawyers filed a motion last month asking an El Paso court to push back Hall’s execution date until experts can evaluate his competency. The motion stated Hall refused contact with counsel for at least two years and argued that his behavior signaled a drastic decline in his already troubled mental state.

Hall stated he was competent to represent himself — and two doctors agreed in 2017. He asked courts to waive his appeals and schedule an execution date.

But Hall’s attorneys have questioned his competency, pointing to a history of delusion, paranoia and suicidal behavior. In January, a court ruled against reconsidering Hall’s competency.

“Mr. Hall’s campaign to drop all appeals and cut off all communication with his counsel for the past two and a half years further confirms that he is being driven by his paranoid delusions to seek to use the State’s power to facilitate his own self-destruction,” the attorneys wrote in their motion to an El Paso district court.

El Paso District Attorney Jaime Esparza said in a statement that Hall has confessed to two murders and “demonstrated that, if given the opportunity, he will commit acts of violence that constitute a continuing threat to society.”

On Oct. 28, 2002, Billhartz and Ted Murgatroyd, an alleged gang prospect, got into an argument near a drug house, according to court documents. After Billhartz threatened to call the police — drawing authorities to the gang’s meth lab — she disappeared with Hall in her truck. Murgatroyd said Hall came back hours later with Billhartz’s body in the back of the cab, according to court records. Hall told Murgatroyd to get a shovel and machete to bury Billhartz. The two drove to New Mexico, where Hall told Murgatroyd to cut off the victim’s fingers to prevent DNA from being found before dumping Billhartz’s body, records state.

Weeks later, Murgatroyd led investigators to the body. Hall, then 21, was arrested later that day and confessed to the killing on Nov. 25, 2002.

He was convicted of capital murder and sentenced to death in 2005.