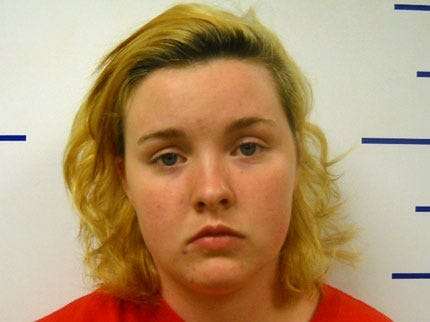 Kaleigh Fryer was fifteen years old when she began to have an affair with an older, married man, Jerry Chiles. According to Chiles Kaleigh repeatedly asked him to murder her father. In the end Jerry would do just that stabbing the victim multiple times causing his death. The murderous pair attempted to make it look like a robbery gone bad. It did not take long for their story fall apart and for one an other turn against each other. Jerry Chiles would testify against Kaleigh in exchange for the death penalty taken off the table. This teen killer would be sentenced to life in prison

The tears 16-year-old Kaleigh Lynn Fryer couldn’t produce the morning she found her father dead in a pool of blood burst forth Monday when she was convicted of his murder.

It took a Logan County jury about two and a half hours to convict Fryer of first-degree murder. She was 15 at the time of her father’s death. Jurors recommended she be sentenced to life in prison with the possibility of parole. A formal sentencing will be June 17 at Logan County Courthouse.

Fryer’s married boyfriend, Jerry Jerone Chiles Jr., 22, admitted to stabbing Lewis Keith Fryer, 50, to death in the man’s bedroom about 3 a.m. on May 12, 2010. Chiles testified against Kaleigh Fryer in return for a sentence of life in prison with the possibility of parole.

Chiles testified Fryer asked him repeatedly to kill her father, left the back door open for him and told him where in the house to find a knife, her father’s keys, a wallet and other items he was instructed to take.

Chiles then stole Lewis Fryer’s car and drove it to south Oklahoma City, where he abandoned it before walking to Crossroads Mall. Chiles testified he called Kaleigh Fryer just before 7 a.m. and asked her to come pick him up at the shopping mall.

She told Chiles there was a lot of blood and that she was going to call 911. Phone records showed Kaleigh Fryer did not sleep through the murder at her father’s Guthrie home as she told investigators.

Instead, she checked her voice mail about 3:30 a.m. and used her phone to access the Internet.

Phone records also confirmed Chiles’ claim that he had called Kaleigh Fryer from a pay phone at the mall just before she called 911. She told police she discovered her father’s body when she woke up about 7 a.m.

Investigators noted in their reports on the morning of the murder that Kaleigh Fryer tried to cry while they talked with her but could not produce any tears.

She was unable to hold tears back Monday as the jurors’ were called one-by-one and affirmed they agreed with the guilty verdict.

During closing arguments, prosecutors described her as a cold, heartless killer who manipulated the simple and childlike Chiles into murdering her father because he was mean to her and made her do chores. Investigators believe Kaleigh Fryer thought she would be able to live with her mother if her father was killed.

Kaleigh Fryer’s defense attorney, Eric Reynolds, used his closing argument to accuse Chiles of lying to get a lighter sentence for the crime. Reynolds said Chiles likely killed Lewis Fryer because he believed Kaleigh Fryer was pregnant and feared going to jail for having sex with her while she was underage.

“Some people are extremely skilled liars,” Reynolds told the jury. “Jerry Chiles lied to you. He lied to the police. He lied to his girlfriend. He changed his story based on his audience.”

After the verdict was read, Lewis Fryer’s brother, Roy Fryer, said he wanted to thank investigators and prosecutors for doing their jobs and the jury for seeing through Kaleigh Fryer’s lies.

Roy Fryer said the death of one family member at the hands of another has taken a toll.

“We’re a close family,” he said. “We lean on each other like family should. That’s how we will get through this.”