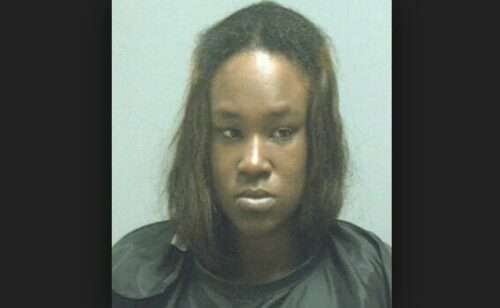 Kayla Dixon was sixteen years old when she shot a man during a robbery in Georgia. According to court documents Kayla Dixon and her boyfriend 20 year old Nathaniel Vivien met the victim through a Craiglist ad where he was selling a Playstation 4. When the victim refused to hand over the video game system Kayla Dixon would grab a gun she had hidden and fatally shot the man. The teen killer and her boyfriend were soon arrested and ultimately she would plead guilty and be sentenced to forty years in prison

A Doraville teen will spend 40 years in prison after pleading guilty to killing a man during the Craigslist sale of his video gaming system.

Kayla Dixon, now 18, took the plea on the same day her trial was to begin.

Prosecutors say Dixon and her boyfriend, Nathaniel Vivien, responded to a Craigslist ad posted by Danny Zeitz in September 2014, intending to rob him. When Zeitz resisted, Dixon admits she took a gun out from between her legs and fired off a fatal shot.

“I would trade anything, almost anything, to bring Daniel back. But I know I can’t,” Dixon said through tears in a prepared statement.  “I know he had plans.  I wish I could tell him I’m so, so sorry that this happened, but I can’t.”

Dixon’s attorney told Judge Wendy Shoob her client had a rough childhood, that included rape and several failed relationships with men who were involved in criminal activity.

“Nothing, in any way, excuses what happened, but this is, in some way, an explanation of how things led to being where they were,” said Leah Abbasi.

“I want Daniel’s family to know that I regret that day. I’m so sorry. I ask that God heals the hearts of Daniel’s loved ones,” she said. “I know I’m facing a long time away and I hope one day my apology will matter.”

Shoob said what happened was tragic for everyone involved and accepted the negotiated plea deal.

Beforehand, Zeitz’s mother, Patty, spoke of the grief her family has endured.

“Each day we wake, even a year and nine months, with the shocking realization that life as we knew it with our son, brother and friend will no longer exist,” she said.  “The loss of Danny has reached the depths of our hearts, souls and the hearts and souls of thousands around the world of his gifts of kindness and joy.”

Zeitz, a semi-professional gamer, had fans around the world and was the subject of a documentary entitled “Level Up” after his murder.

After the hearing, Zeitz told Petchenik her family accepts Dixon’s apology, but says it will be a long time before they can forgive her.

“At first I didn’t want to accept her apology.  I thought her apology today was very heartfelt and I feel like she is truly sorry for what happened,” she told Petchenik.  “It’s just a crime that young people can get caught in these situations because of the examples they’d had in their lives.”

Zeitz’s father, John, told Petchenik he hopes Dixon can be rehabilitated in prison.

“I hope it stays with her and she becomes a better person and able to contribute when she finally does get out,” he said.

Dixon’s co-defendant, Nathaniel Vivien, still faces a trial later this summer.  Dixon’s attorney told the judge she is willing to testify against him if asked.