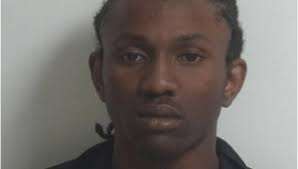 A 16-year-old told two Middle Georgia men on Facebook that he was interested in buying a dirt bike they had for sale.

To finalize the deal, they drove to meet the teen in Walton County, where they were shot several times in the back of the head and robbed.

Kinterie Kiatis Durden, who is now 19, was convicted Wednesday of killing the two men in 2017, the Walton County District Attorney’s Office said in a news release. The two victims were 30-year-old Davoddren Harris and 26-year-old Cortez White.

Harris and White lived in Meriwether County and were trying to sell a Yamaha dirt bike on Facebook Marketplace. On May 22, Kinterie Kiatis Durden told the two he was interested in buying the bike and asked them to drive to his home in Social Circle, the release said.

The pickup truck, which was moving slowly at the time of the shooting, flipped over and landed right-side up, the release said. Kinterie Kiatis Durden then crawled out of the vehicle and rode away on the dirt bike.

Kinterie Kiatis Durden later showed off the motorcycle to his friends, claiming he bought it, the release said. He hid the bike in the woods that night, however.

He was arrested the next day and has remained in the county’s jail ever since.

Kinterie Kiatis Durden was found guilty of two counts of malice murder, felony murder, armed robbery, aggravated assault and possession of a firearm during the commission of a felony, the release said. His sentencing will be held at a later date.

After a 16-year-old shot and killed two men in Walton County and stole their dirt bike, the next thing he did was ride it around and show off to his friends.

It would be his last action as a free man.

Kinterie Kiatis Durden, who is now 19, was sentenced Thursday to life in prison without the possibility of parole for the double malice murder. During his court appearance, which was done over Zoom, he appeared content.

“It’s all good,” he said, during his last address to Judge Samuel D. Ozburn before his sentencing.

In May 2017, Durden told the two victims that he was interested in buying the Yamaha dirt bike they posted for sale on Facebook. The sellers, 30-year-old Davoddren Harris and 26-year-old Cortez White, both of Meriwether County, drove to Durden’s home in Social Circle to finalize the deal

The two men let Durden get into the back of their Toyota Tacoma, which was carrying the dirt bike, and began driving along Glegg Farm Road, according to prosecutors.

Without warning, Durden shot Harris, who was driving, twice in the back of the head. He then turned the gun toward White, who was shot three times in the head and once in his back.https://12ab3b0f1f6d9db14cc9a88c9f219063.safeframe.googlesyndication.com/safeframe/1-0-37/html/container.html

The pickup truck, which was moving slowly at the time, flipped over and landed right-side up. Durden then crawled out of the vehicle and rode away on the dirt bike, leaving the two men to die.

After showing the bike off to his friends — and lying about purchasing it — he hid it in some nearby woods. He was arrested the next day.

At his trial, Durden testified that the double shooting was in self-defense. However, the judge said that was the seventh time his story changed.

“What bothers me about this case was when he was first interviewed, he denied even being there,” Ozburn said Wednesday before the sentencing. “He admitted in cross-examination that he had told at least six different tales, with another different one at trial.”

“There was no sudden impulsion in this crime,” Zon said. “This was a premeditated crime, cold and calculated.”

In November 2019, Durden was convicted on all counts, including two counts of malice murder, felony murder, armed robbery, aggravated assault and other firearm-related charges.

Since then, he’s had several issues while in custody in the Walton County jail, including a complaint that he made sexual statements and performed lewd acts in front of a corrections officer, the judge said. The officer testified about the incidents during the sentencing hearing.

Just before was announcing his sentence, Obsurn listed Durden’s lengthy juvenile record. It included breaking a student’s jaw once, stealing a firearm on multiple occasions and stealing motor vehicles.

“This is a very troubled young man, and I am deeply concerned with him as an individual,” he said. “I’m finding that he is irreparably corrupt.

To close out the hearing, Durden’s attorney filed a motion to appeal the verdict and sentence