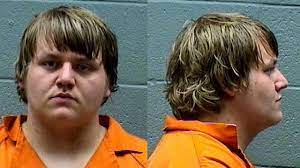 Kyle Smith was sixteen years old when he murdered his Grandparents in Oklahoma. According to court documents Kyle Smith would hack his Grandparents: David Garrick, 60, and Rose Garrick, 57 to death with a machete before setting their house on fire. This teen killer would be sentenced to life in prison plus ten years.

A Midwest City teenager admitted in court Tuesday that he murdered his grandparents with a machete, killed their dog and set their house on fire.

Kyle Alexander Smith, 17, was sentenced to life in prison, plus 10 years.

Under current law, the earliest he can be released on parole would be 2057.

The punishment was the outcome of a plea deal with prosecutors. He agreed to testify against two friends, who are charged as accessories.

Smith lived with David Garrick, 60, and Rose Garrick, 57. They were hacked and stabbed to death inside their house late March 22, prosecutors said. Their bodies were found after the house was set on fire the next morning.

Smith was captured later March 23 in Chickasha. He told one witness he was going to Mexico, police reported.

A teenager cursed at his grandparents and laughed as he made a cellphone video late March 22 of their mutilated bodies, police reported.

Smith lived with David Garrick, 60, and Rose Garrick, 57. He is accused in a double-murder charge of hacking and stabbing them to death with a machete inside their house March 22. He and two friends are accused of setting the house and bodies on fire the next morning.

He was captured in Chickasha March 23. He told one witness he was going to Mexico, police reported.

His attorney, Assistant Public Defender Shea Smith said, “We know this boy is mentally ill, and we are exploring all angles of this case.”

Police alleged shortly after Smith’s arrest that he made a cellphone video of the crime scene. New details about that video are contained in police reports reviewed last week by The Oklahoman.

In the video, Smith repeatedly used profanity and spoke at first in a deep raspy voice, police reported.

Using expletives, Smith said, “Look at all those guts. That’s … crazy. F— both of you,” police reported.

The police reports reveal the attack came after the grandmother stopped Smith from sneaking out of the house that night to meet his friend, Siders.

Police reported Siders said he had gone to the house to see if Smith could go out. Siders said he left after he heard the grandmother yell at Smith to get back in the house, according to the reports.

Siders quoted Smith as saying in the pickup, “I killed them,” according to the police reports.

Siders said Smith showed him a few seconds of the video. According to the reports, Siders recalled saying to Smith, “You didn’t really do this. Did you?”

Siders also told police Smith held up a baggie of methamphetamine and said, “I have a hundred dollars. Let’s go party.” Siders said he did not go with Smith.

Siders, 20, has not been charged in the case.

Two other of Smith’s friends are charged with being accessories.

Rose Garrick’s friends told police she had been having difficulties with her grandson.

Police were told Rose Garrick had taken Smith’s car keys away and told him he couldn’t drive again until he finished school homework he had been assigned to do over spring break, according to the reports. Police said he was a student at Moore High School.

Rose Garrick confided to one friend that Smith became very upset about being disciplined and shredded what homework he had done, according to the reports.

The grandmother said Smith then kicked the spindles out of a porch railing.

The grandmother also had said she planned to take Smith to see his counselor March 23, police reported. She wanted him to be changed back to an old prescription because he wasn’t behaving well on new medication, according to the reports.

His mother, Michelle Smith, of Moore, had taken him to dinner for his birthday March 22.

She told police he said then that the new medication he was taking made him more aggressive, according to the reports.

The reports reviewed by The Oklahoman did not disclose exactly why Smith was seeing a counselor.

His mother said she thought he was being seen for ADHD, or attention deficit hyperactivity disorder.

Police in March reported finding a “demonic drawing” on a bedroom floor of the burned house.

The reports reviewed by The Oklahoman did not reveal anything about any interest by Smith in the occult.

His grandparents in 2010 sent Smith to a well-regarded Kansas military school after he was charged with arson but could not afford to send him again, records show.

Last week, he waived his preliminary hearing in Oklahoma County District Court. Next up is a conference in August to schedule a trial date.