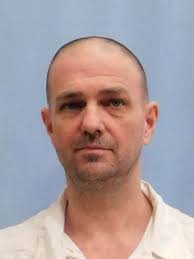 The state of Alabama executed Michael Wayne Eggers– an inmate who asked to die– on Thursday night at Holman Correctional Facility in Atmore. His time of death was 7:29 p.m.

This is the first execution the state has carried out this year.

Just before 6 p.m., the set execution time, the U.S. Supreme Court denied a stay of execution and announced they would not review the case. Their decision came after Eggers’ former attorney filed petitions for a stay and for a writ of certiorari on Monday.

Eggers, 50, was convicted of capital murder in 2002 for the death of 67-year-old Bennie Francis Murray. In 2016, the inmate said he wished to expedite his execution date and fired his attorneys from the Federal Public Defender’s Office in Montgomery.

Eggers’ execution started at 6:54 p.m., when the curtain to the three viewing rooms opened. The warden first read Eggers his death warrant, and then asked if he had any last words. Eggers replied, “No ma’am.”

At 6:56 p.m., Eggers gave a thumbs up signal using his hand facing the room where his brother, sister-in-law, two friends, and spiritual advisor sat, along with members of the media. One of the men in Eggers’ group gave back a sign language signal meaning, “I love you.”

His breathing slowed, and another consciousness check was performed at 7:09 p.m. Eggers made no movements.

At 7:12 p.m., the inmate’s breathing appeared to stop. The curtains were closed for the viewing rooms at 7:22 p.m., and Alabama Department of Corrections spokesman Bob Horton announced the time of death was officially 7:29 p.m.

Alabama Attorney General Steve Marshal issued this statement following the execution: “Michael Eggers showed no mercy towards his victim, his former employer, Bennie Francis Murray, who donated much of her personal time to helping him find a new job. On the night of her murder, Mrs. Murray gave Eggers a lift to pick up his car.  Instead of showing her gratitude, Eggers rewarded her kindness by brutally beating and strangling her.  He even returned to the scene of the crime to make sure she was dead.  After 18 years of waiting, justice has finally been served tonight for the Murray family.”

Gov. Kay Ivey also issued a statement. She said: “When an execution is approaching, I thoroughly consider all elements of the crime committed, the procedural history of the case and any mitigating and aggravating factors which are present. With every execution, my goal is to ensure that the law is followed and that justice is ultimately served for all parties involved, including the accused and the victim. Mr. Eggers was convicted of brutally beating and then murdering Mrs. Francis Murray, who was simply trying to help him. The facts are clear, and Mr. Eggers admits, that he went to great lengths to ensure Mrs. Murray’s death and then to hide the evidence of his crime. His case has been reviewed at every level of the judiciary and has consistently been upheld, including Mr. Eggers’ own personal request to have his sentence carried out. After having considered Mr. Eggers’ wanton crime and all the factors surrounding his case, I determined it was best to allow the laws of this state to be followed and for the execution to be completed.”

Members of the media were driven to the prison just before 6 p.m., but were not allowed inside the facility until approximately 45 minutes later. Alabama Department of Corrections Commissioner Jeff Dunn said there were no issues with the execution. “It just takes time to get the inmate prepared,” he said. “There was nothing unusual about that.”

“This execution went exactly according to our protocol,” Dunn said.

No representatives from the victim’s family witnessed the execution, and none provided a statement to Dunn.

Following the execution, several of the men with Eggers’ friends and family shook the hands of corrections officers inside the viewing room and thanked them.

As a special request, Eggers asked that no attorneys be allowed to visit him or witness his execution. He did allow his brother, sister-in-law, two friends, and his spiritual advisor to witness. Alabama Department of Corrections spokesman Bob Horton confirmed that each of those people will attend the execution.

The execution comes after years of Eggers seeking to represent himself during his legal proceedings, firing his attorneys from the Federal Public Defender’s Office in Montgomery, and asking the state to expedite his execution. A federal judge declared him competent to waive his appeals, and the 11th Circuit Court of Appeals affirmed that decision last year.

In 2002, Eggers was convicted of capital murder for the December 2000 killing of 67-year-old Bennie Francis Murray. Murray and her husband owned a carnival concessions business that traveled with various carnivals for Kissel Rides and Shows, but lived in Talladega when they weren’t on the road.

According to court records and previous stories from the Birmingham News, Eggers worked as a short-order cook for the Murrays until September of 2000 when he moved to Jasper. In late December of that year, then 33-year-old Eggers called Murray and asked for his job back. She said that the carnival was on a break until the next spring, and that the converted trailer where several of their employees lived had no room for another person at the time. On Dec. 28, he called back and asked Murray to pick up him and his teenage son from the bus station in Birmingham. She picked then up and the three went to Talladega.

On Dec. 30, 2000, Eggers asked Murray to drive him and his son back to their home in Jasper. She agreed, and the three left in her white 1988 Chevrolet pickup truck.

After dropping off his son at the Jasper apartment, Eggers asked Murray to drive him to his car in Nauvoo. Again, Murray agreed to drive Eggers. On the way to Nauvoo, Eggers told police he and Murray got into a fight, and he beat her unconscious. He said he then pushed her out of the truck, and he took off.

Eggers said after he left, he worried that Murray was still alive and he “wasn’t going to let her stay out there suffering,” court records show; so, he went back, and kicked her and choked her. According to court records, “Eggers then dragged Francis into nearby woods where she could not be seen from the road and, because he believed she was still alive at that point, he put a tree limb on her throat and stood on it in an effort to kill her.”

Eggers was arrested in Kissimmee, Florida, about one week after Murray disappeared. Police found Murray’s abandoned truck in Kentucky earlier that day, and discovered someone had used her ATM card several times in the state on Dec. 31 and on Jan. 1, 2001. He was found in Florida after being tracked through telephone calls.

After his arrest Eggers led police to the missing woman’s unburied body, which still was underneath the tree limb, in a wooded area in northwest Walker County.

Eggers was found guilty by a Walker County jury at his 2002 trial, and the jury voted 11-1 to recommend the death penalty. Circuit Court Judge James Brotherton followed the jury’s recommendation.

Eggers spoke at his sentencing hearing. “I stand before you today, not to beg for my life or seek your sympathy. I am asking for a sentence of death… my actions cannot be justified,” he said.

The Alabama Court of Criminal Appeals later upheld his conviction and death sentence.

In 2014, Eggers was appointed lawyers from the Federal Public Defender’s Office in Montgomery to handle his appeals. The inmate, however, said he wanted to fire his attorneys and waive future appeals.

A federal hearing was held in April 2016 to determine Eggers’ competency. Both Eggers, his former lawyers’ expert witness Dr. Kenneth Benedict, and the state’s expert Dr. Glen King testified. Following the hearing, a federal judge ruled Eggers competent to give up his rights to appeal and dismiss his lawyers, and the 11th Circuit Court of Appeals later agreed.

In December, Assistant Federal Defender John Palombi asked the 11th Circuit Court of Appeals to hold a rehearing on the case with its full panel of judges, but they denied his request.

As of Thursday morning, the U.S. Supreme Court had not ruled on Palombi’s petition for a stay of execution. Monday, the lawyer filed for a stay and for a writ of certioari, or a request to review the case. “Michael Eggers is severely mentally ill,” one of the filings states. “His testimony and filings are strong evidence of the irrationality of his reasons for wanting to terminate present counsel and to abandon his appeals.”

Tuesday, the Alabama Attorney General’s Office filed responses to Palombi’s requests. “While appointed counsel may speculate about the reasons Eggers wanted to discharge his counsel and waive his appeals, the fact remains that he is competent to do so,” the AG’s filing to the Supreme Court states.

In a filing on Wednesday, the federal defender’s office, however, countered to the U.S. Supreme Court that Eggers isn’t competent.

“Michael Eggers is delusional and has been equivocal on the issue of whether he wants to be executed for over 15 years. This Court should stay his execution and take this case to examine the important issues surrounding the execution of the mentally ill, in particular, whether a death-sentenced inmate should be allowed to expedite his execution with the help of the State, when what he truly desires is to represent himself.”

His former attorneys argued to the nation’s highest court they believe the 50-year-old inmate is delusional and wasn’t competent when he dropped his appeals and asked the courts to “expedite” his execution. The U.S. Supreme Court denied their petitions on Thursday evening, before the execution was set to begin.

Eggers execution date is the third one the state has faced this year. First, Vernon Madison was set to be executed on January 25, but the U.S. Supreme Court stayed his execution. On February 22, the state was set to execute Doyle Lee Hamm–a 61-year-old inmate who has been on death row over 30 years for killing a motel clerk in Cullman. After a brief delay, the state attempted to execute Hamm, but couldn’t find a vein to insert the catheter needed for the lethal drugs. At approximately 11:30 p.m., 30 minutes before the death warrant expired, the state called off Hamm’s execution.

If executed, Eggers would be the first inmate to be put to death this year.

There is one other execution already scheduled for 2018: Walter Lee Moody.

Moody is set to die on April 19, and at 83-years-old is the oldest inmate currently on Alabama Death Row., Earlier this year, Moody had his request for a review of his appeal rejected by the U.S. Supreme Court. The next day the Alabama Attorney General sought an execution date from the Alabama Supreme Court.

Moody was convicted of killing U.S. 11th Circuit Court of Appeals Judge Robert S. Vance. Vance died Dec. 16, 1989, and his wife, Helen, was seriously injured after the judge opened a package that had been sent to his home, detonating a pipe bomb. A similar bomb killed a lawyer in Atlanta two days later.

Moody was linked to the crimes through a similar bomb nearly two decades earlier that had injured his wife when it exploded. His prosecution in that case led to his resentment of the courts leading up to the 1989 bombings.