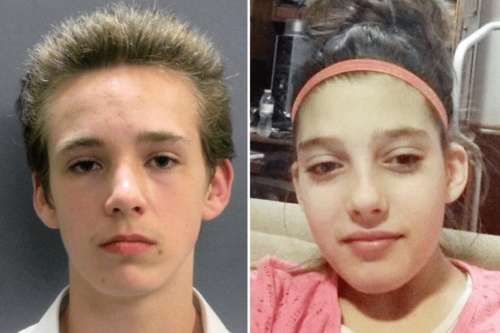 Tristan Potts was thirteen years old when he murdered his twelve year old sister. According to court documents Tristan Potts and his sister Teresa Potts were both adopted out of the foster care system. On the day of the murder this teen killer would open fire on his sister than flee the home headed for the woods. Tristan would return sometime later and authorities believed he planned to set the house on fire before fleeing to Georgia.

A southwestern Missouri teenager has been sentenced to 25 years in prison for fatally shooting his 12-year-old sister when he was 13.

Tristan Potts, now 15, was sentenced Monday in Joplin for second-degree murder, armed criminal action and attempted first-degree arson, The Joplin Globe ) reports. Tristan, who was certified to stand trial as an adult, pleaded guilty to the charges in December.

His sister, Teresa Potts, was suffering from gunshot wounds to her temple and right shoulder when officers responded in October 2015 to their adoptive parents’ home near Jasper. Authorities say the siblings were adopted out of foster care.

Chris Carriger, a detective with the Jasper County Sheriff’s Department, testified at a hearing that Tristan fled into some woods after the shooting and turned up later near a shop building behind the house, close to where investigators eventually recovered two handguns. Carriger said the teen tested positive for gunshot residue on his hands.

The teen was believed to have been preparing to set the family’s home on fire and run off to Georgia. The detective said he found the home in “messy disarray,” with black gunpowder strewn throughout the rooms and about 500 rounds of .22-caliber bullets in two skillets in the kitchen.

Carriger also testified that the investigation turned up three lists that bore the fingerprints of Tristan Potts, including one titled “Supplies for Georgia.” Investigators later learned that the boy had been in contact on Facebook with a female in Georgia. Items on the to-do-lists, including a gun and food, were found near the home’s front door.

As part of the sentence, a judge assigned Potts to a program in which a juvenile and adult sentence is simultaneously imposed, with the adult sentence suspended while the inmate undergoes treatment and vocational training. When he turns 21, the court determines whether he should remain in custody.

Circuit Judge David Mouton sustained a motion Tuesday that would keep Tristan Potts in the state’s dual jurisdiction program for teens convicted of serious crimes past his 18th birthday two months from now.

Tristan Potts shot and killed his 12-year-old sister, Teresa Potts, in the front yard of their adoptive parents’ home on Oct. 8, 2015, when he was 13 years old. Investigators discovered evidence in the wake of the shooting that the youth was preparing to set the family’s home on fire as well and run off to Georgia to be with a girl he knew through Facebook.

The arson was prevented and his plan to run away thwarted when his father arrived home just as the fatal shots were fired.

The teen, who was certified to stand trial as an adult, pleaded guilty in December 2016 to second-degree murder, armed criminal action and arson, and was sentenced to concurrent terms of 25 years, 15 years and seven years.

Mouton decided at that time that the teen should serve the terms in the dual jurisdiction program of the Division of Youth Services in the Missouri Department of Social Services. Potts has been incarcerated since March 2017 in the program’s detention center at Montgomery City.

State law establishing and governing the program states that when juvenile offenders reach the age of 17, the court of conviction and sentencing must hold a hearing and revoke the suspension of sentence that led to their placement at Montgomery City and transfer them into the adult prison system for completion of their term when they turn 18, direct that they remain in the Montgomery City program or place them on probation.

Tristan Potts, who will turn 18 on Nov. 15, was at the hearing Tuesday in Jasper County Circuit Court in the custody of youth services personnel.

Amy Crites, an attorney for the Division of Youth Services, told Mouton that Potts “has done amazingly well” in the program. She said the division consequently was recommending he remain at Montgomery City past his 18th birthday. A motion to that effect was filed with the court Aug. 27.

A letter attached to the motion and signed by the manager and youth group leader at the Montgomery City Youth Center states that Potts completed his high school education while being held there and that he is enrolled in classes this fall offered through the Moberly Area Community College. The letter states that his ultimate education goal is to enroll in the equine program at William Woods University once he is released from state custody.

The letter states that he has demonstrated “overall progress” in meeting the treatment goals that were set for him when he first entered the program, which included a focus on developing empathy and using it in his decision-making, learning how to deal with feelings of abandonment, neglect and loss, and developing “healthy coping skills and self-regulation.”

“When Tristan arrived at Montgomery City Youth Center, he didn’t have an understanding of empathy,” the letter reads. “Tristan has put much work into learning to develop empathy for others and has demonstrated empathy with group members” and “continues to reflect on past experiences in regards to these issues, as well as the death of his sister; however, he has more work to do while he is here.”

The letter states that Tristan Potts has come to understand how his actions affected his victims and the community in which he lived.

And further reads: “Tristan tried to participate in family therapy with his family with the goal of making an amends; however, they are unable to attend because of the distance they have to travel. He has tried talking to family members about his past actions, but this has led to arguments as they are unable to effectively communicate at this time.”

Theresa Kenney, the Jasper County prosecutor, told the judge that her office is not opposed to the teen remaining in the program at Montgomery City past his 18th birthday.

A juvenile offender can remain at Montgomery City until his 21st birthday, prior to which time, a hearing must be held to determine if he is to be released on probation or transferred to an adult prison to continue serving his sentences.

The judge imposed three special conditions when he sent Potts to the program two years ago. He ordered that the youth must show a genuine commitment to participate in the program, accept any restrictions imposed on him and not pose a threat to the safety of others involved in the program.

“Tristan, I’ve been very glad to see your progress,” the judge told Potts at Tuesday’s hearing. “It’s good to see you today. You have exceeded my expectations.”

A 15-year-old boy in Missouri was sentenced to 25 years in prison after he pleaded guilty to the murder of his sister, according to news reports.

The Joplin Globe reports Circuit Judge David Mouton sentenced Tristan Potts to 25 years in prison after he pleaded guilty to shooting and killing his 12-year-old sister Teresa “Tressa” Potts. Tristan was reportedly 13 when he committed the crime.

In 2015, Tristan Potts reportedly shot his sister in the head and shoulder in the front yard of their adoptive parents’ home and then fled into the woods. The Joplin Globe reports he may have been planning to set the home on fire and go to Georgia, where a girl he had apparently been in touch with lives. Investigators found gunpowder residue throughout the home, along with around 500 bullets, the New York Daily News reported. The Joplin Globe also reported that two .22-caliber handguns had been taken from his father’s gun cabinet; Teresa was shot with a .22-caliber gun, according to autopsy results.

In a plea deal, Tristan pleaded guilty to second-degree murder, armed criminal action and attempted arson, according to the New York Daily News. The judge sentenced him to 25 years in prison for the murder, along with 15 years for armed criminal action and seven years for attempted arson. Tristan will be able to serve the 15- and 7-year sentences concurrently with his 25-year term. But, his actual stay in prison may be shorter than that; he was also placed in a program that provides treatment, education, and jobs training up until age 21. Once Tristan turns 21, the court will reassess whether they think he should remain in prison, according to the New York Daily News.