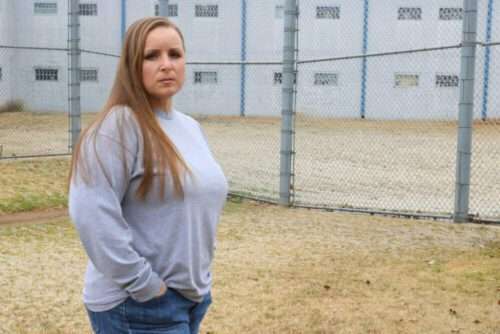 Dana Barker made a lot of bad decisions when she was a teenager.

She and her friends once packed 15 people like circus clowns into a 2-door Nissan Sentra — a few of them rode in the trunk. They got sloppy drunk and went swimming in the deep, dark waters of Lake Eufaula at night.

She dropped out of high school, made thousands of dollars in unauthorized charges on her dad’s credit cards and ran away from home.

And in January 1994 — when she was just 17 years old — Barker shot her former stepmother Brenda Barker three times and left her to die.

Barker had rubber gloves, a stolen handgun and a rented car, according to court records. She cut the phone lines before knocking on the front door of Brenda Barker’s house in Okmulgee. A struggle ensued.

Brenda Barker’s two sons later found her lying in a pool of blood in the kitchen. She died 13 days later in the hospital.

Now 42, Barker has spent the past 25 years in prison for the murder. She’s serving life without parole.

She lives at Mabel Bassett Correctional Center, a mostly grey cluster of buildings ringed with razor wire in Pottawatomie County.

Barker has long, straight hair that falls to the middle of her back and a gap between her front teeth that gives her an expressive look when she talks.

Today, Barker says she knows what she did was wrong and she takes responsibility for her actions. She also believes she deserves a second chance.

“I should have gone to prison,” she said. “I did something horrible, but I don’t know that I should have given up the rest of my life.”

In recent rulings, the U.S. Supreme Court has recognized that research over the past 20 years shows the human brain is still developing in adolescents, making them less culpable for their actions. The regions of the human brain that manage decision making, aggression and impulse control are still forming during adolescence.  The Supreme Court has also recognized that adolescents are more susceptible to peer pressure, and are less able to consider future negative consequences of their actions. These same differences mean adolescents have a greater capacity for rehabilitation.

Two U.S Supreme Court decisions and subsequent state appellate court decisions have held that most people serving without parole for crimes committed as juveniles in Oklahoma are entitled to new sentencing trials that take their youth and potential for rehabilitation into account.

Barker now hopes for a new sentencing hearing that could give her a second chance at freedom.

When she was 17, Barker says she was a troubled, angry teenager who had suffered years severe physical and sexual abuse at the hands of her late father, Joe Barker.

“There was never an escape,” she said. “No matter how hard I tried, no matter what I did to break free, I couldn’t break free from my dad.”

She claims her father threatened to kill her unless she killed his ex-wife for him and that he groomed and manipulated her over a period of two years to commit the crime.

Joe and Brenda Barker were involved in a contentious fight over custody of their 9-year old son—Barker’s little brother.

She says Joe Barker told her that her little brother was being molested—something she now believes was a lie.

“Now I think he just didn’t want to pay child support,” she said.

Police investigated Joe Barker’s involvement in Brenda Barker’s murder, but they couldn’t find much hard evidence to link him to the crime.

But he continues to believe that Barker had very little remorse about the crime.

“She had a very cold personality,” he said. “She never showed any emotion.”

Barker said she was intimidated by Giuloli and the legal proceedings, much of which she didn’t understand as a 17 year old. Her court-appointed attorney told her to be quiet and reserved in court.

“I don’t think that’s a fair assessment. I’d like to know what his definition of remorse is,” she said. “I don’t know what these people want from you sometimes.”

Outside of Barker’s testimony, there was little to show her father’s involvement in the crime, Giulioli said. Since Joe Barker wasn’t present at the crime scene, there wasn’t enough independent corroboration of her story to file charges, he said.

“We spent considerable time trying to link the ex-husband to the crime, but we weren’t able to do so,” he said.

Joe Barker was never charged in connection with Brenda Barker’s death. He died in 2010.

Several family members said that Joe Barker was abusive to his entire family and that Barker was frequently singled out for the worst treatment, according to a pre-sentencing investigation report from 1995.

In an interview, Barker’s mother Mary Rine said Joe Barker was sadistic and controlling for the duration of their marriage. He beat her and sexually assaulted her, she said.

Joe Barker was fond of rare beef for dinner. He once pressed Rine’s hand against the heating element of an electric stove when she overcooked his steak, she said.

“I don’t know if he was a psychopath, a sociopath or all the paths, but if you met him, you’d say he was the nicest man you’d ever want to meet,” she said.

There is also documentation of multiple reports of Joe Barker to Child Protective Services, according to Dana Barker’s court file.

“Back in those days, DHS just took you back home,” Barker said. “I couldn’t get away from him. I had to go to prison before I was free.”

And yet, she maintained contact with her father until his death. He visited her in prison and deposited money in her commissary account. He became her sole financial provider in prison.

“It’s an ugly situation. There’s not a good explanation for it at the end of the day,” Barker said. “He was still my dad and as bad as he was, there was still some good in him.”

Brenda’s Barker’s daughter Kerry Whitley was also just 17 when her mother was murdered. After Brenda Barker’s death, Whitley raised her brothers, who were ages 9 and 15 in 1994.

She and her siblings declined an interview request.

In 1995, Whitley told a probation and parole investigator that she believed Joe Barker was the “mastermind” behind her mother’s murder. She also said that she and her siblings thought Barker should spend the rest of her life in prison, according to court records.

“I’ve become a ‘parent’ of my two brothers,” Whitley said in the report. “My youngest brother has problems sometimes dealing with the fact that his mom is gone and I stay up with him if he’s crying on just wants to talk about it.”

In prison, Barker took a faith and character class in prison where the instructor encouraged her to write a letter to Brenda Barker’s children, but she decided against it.

“I think the best thing I can do is stay away,” she said.

The last time Barker saw her little brother, it was in an Okmulgee County courtroom. He told her that he hated her.

“If it would be important, I would say that I’m sorry but I don’t know that that’s enough,” she said. “They’ve gone 25 years without their mother. You can’t fix that.”